We're all aware of the fantastic new video from below the decks of HMS Terror -- but this year, Parks Canada's archaeologists also enjoyed a remarkably long window for dives on HMS Erebus. As she's in much more shallow water, and subject to ongoing forces of tides and currents, work on Erebus has been given a priority, with the recovery of artifacts proceeding along much more urgent lines. This is beacuse, for archaeologists, context is everything; it's not about bringing things up so much as it is about learning from where things are. If the ship, or parts of it, are moving or being damaged, the context will be destroyed with it, and there's no way to recover that lost knowledge.

Parks Canada hasn't yet given out any official press account of the items brought up from the Erebus. Fortunately, thanks to Hailey Aklah Nalungiaq Okpik and other friends in Gjoa Haven, along with careful work by Logan Zachary and many other members of the Remembering the Franklin Expedition Facebook group, we've been able to see some of the items that were shown to the community, and learn something about their context ourselves. Seen above, for instance, is a Whampoa pattern meat strainer plate, which was found in a portside officer's cabin, probably the Mate's. At that same location were found a button, a pencil, a wooden handle, and a regular Whampoa pattern plate. At another location, the Officers' Mess Room, a bottle, apparently intact, was recovered. 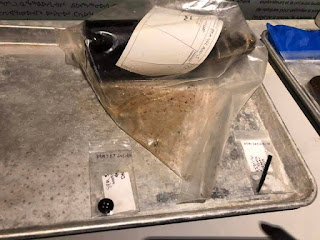 Some items, though fascinating, weren't tagged with a visible label in the photos; these include a pair of tongs (probably meant for sugar), a ceramic ink bottle, and a boot-brush missing its bristles. Also recovered were a leather boot sole, a glass decanter, and a liquor bottle, quite possibly the same as seen in Okpik's photograph (right). It's also noteworthy that the numbers of the tags are well into triple digits, which suggests that, well beyond the items which were displayed in Gjoa Haven, there is much, much more to come! It's tantalizing to wonder what other wonders await -- but at least for now we have a sample to savor. One thing is for certain: the success of the Parks team during this extraordinary season more than makes up for last year's truncated one, and will surely add a vital new chapter to what we know of the men whose lives were lived aboard both HMS Terror and HMS Erebus.