Until today, I had not heard the name Yusuke Kakuhata mentioned in the context of the Franklin expedition. His plan sounds almost absurd in its ambition -- to travel overland from Resolute to the Baker Lake area on foot, without either a satellite phone or a GPS transponder.
Mr. Kakuhata, a former newspaper reporter who has received the Takeshi Kaiko award for his nonfiction writing, says he is seeking the answer to the question "What does it mean to travel through an unexplored land?"
I would caution him that, first off, the area he'll be traveling through is not unexplored -- but it is extremely remote, and temperatures in February can be harsh -- at the moment of this posting, it's 13 degrees below zero Fahrenheit, with a predicted low of -29, and blowing snow. He plans to travel in the company of Yasunaga Ogita, who has visited the Magnetic North Pole in 2010, and the Geographic North Pole in 2011, so at least he will have an experienced companion, although it remains unclear what kind of support crew, caches, or other provisions for the unexpected have been made. According to the Daily Yomiuri Online, Mr. Kakuhata says that he "wants to experience the extreme situations the lost team faced and will solve any problems through trial and error." It seems a curious determination -- I only hope that his trek does not place other people -- rescuers -- at risk. It is one thing to seek the mystery at the heart of a lost expedition, and quite another to seek to lose one's self.
Posted by Russell Potter at 5:10 PM No comments: 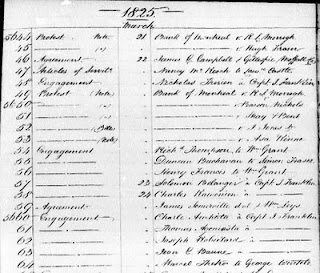 Although best known for his final, fatal voyage of 1845, Sir John Franklin's initial fame rested upon the near-disaster of his expedition to the Polar Sea in 1819-1822. It was this journey, which ended in starvation, cannibalism, and murder, which earned Franklin the lasting sobriquet "the man who ate his boots," proving once again that, when it comes to Arctic exploration, risk is everything.
Not that the Royal Navy was opposed to outsourcing some of that risk -- indeed, they did so quite readily -- and, since they were sticklers for paperwork, we have the contracts to show it. My thanks to Laurent Veilleux for sending along links to these contracts, which have been preserved in the Bibliothèque Nationale du Québec. They are part of the documentation for Franklin's third Polar expedition, not his disastrous second -- I had to do a double-take at first, since one of the more notable names here is that of Solomon Bélanger, a man who, considering that he saved Franklin's life on one occasion, and suffered being berated by his employer on another, might understandably have been reluctant to sign up for another tour. The pay was good, though -- and why not? -- and this time, Franklin guided his men through their voyage without major loss of life.
As it happens, Bélanger was to survive Franklin by nearly 16 years; he died in the parish of St. Jacques de l'Archigan, Québec, in April of 1863, having traversed the route to the Polar Sea twice, though without any memorials having been erected to his name.
Posted by Russell Potter at 8:49 AM 6 comments: 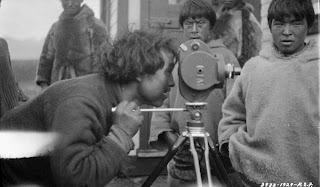 Looking for information relating to Arctic history in Canada has always been a bit of a task; aside from Library & Archives Canada, many of the other notable institutions -- the Hudson's Bay Archives, the Glenbow Museum, the Canadian Museum of Civilization -- each had their own online archives, all with different search systems. That's all about to change now, though, thanks to the new Canadiana Discovery Portal, where dozens of institutions have begun to share their online materials, making them available at a single click. You can also limit your search by collection, if desired, as well as other parameters. Right now, the system is still in its beta version, and most of the contributing collections have placed only some portion of their digital material in the new system. Nevertheless, just this morning, I made use of the portal and came upon the following:

From my initial experience, I would say that, in its present form, the value added is largely that of convenience, although further searches in individual archives would still be needed. And yet as the project progresses, I'm certain it will soon have the breadth and flexibility to be a truly world-class archival search, and the go-to site for anyone interested in the history of the Canadian Arctic.

P.S. -- my thanks to the Bioscope blog for first alerting me to this service!
Posted by Russell Potter at 6:56 AM 2 comments:

What are the odds that this tiny rock, which I picked up at random from the gravel at Beechey Island, would happen to be shaped almost exactly like Beechey Island? Common sense would seem to suggest that it's incredibly unlikely, but -- as a friend to whom I showed this rock remarked, seen in terms of fractal geometry, the odds of such a thing are actually far closer to one than to zero. Fractal geometry often exhibits this property of "self-similarity," and there is even a mathematical formula for it. Like a glass hologram shattered into bits, each shard of a fractal form contains within it the same patterning forces and tendencies that shaped its parent. Of course, my Beechey rock has not been subject to erosion, ice-scour, tides, or other larger-scale forces; it's a bit more angular and rough. It appears to be a sort of igneous rock, and is pocked with little round holes that look like the craters on some irregularly-shaped moon. Nevertheless, the signature of nature lies within it; what I had picked up as a casual souvenir turns out to have a connection with its source that is anything but accidental.
These patterns were first noted by the mathematician Benoit Mandelbrot, after whom the 'Mandelbrot set' is named. His 1983 book, The Fractal Geometry of Nature, shows the prevalence of such forms in all manner of realms, ranging in scale from microscopic particles of dust to entire galaxies in space. His ideas were at first received with considerable skepticism, but have since been widely accepted and better understood; their combination of widespread applicability and mathematical elegance sets them as a remarkable leap in the understanding of the world around us.
In passing, I'd like to note that this is the 100th post on this blog since I began it in February of 2009 -- I'm still finding new things to write about, and I look forward to many more posts and responses to come. Since the start, we've had 34,833 pageviews, from all around the world -- over 4,000 from Canada, 3,000 from Australia, 1,800 from Poland, 1,500 from Germany, more than 1,000 from Ireland, the Netherlands, Itay, and Hungary, and even 409 from India!
My thanks to everyone who has read and posted on the site.
Posted by Russell Potter at 7:25 AM 3 comments: