That Time of Year Again 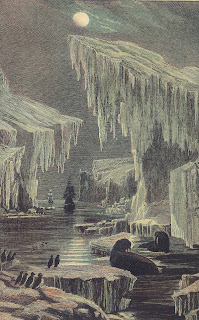 So here we go again: Yet another Parks Canada search for the remains of Sir John Franklin's ships, the "Erebus" and "Terror." Once more, we have the press releases, the Arctic photo-ops with Stephen Harper, the meaningful pronouncements of various government ministers, and clips of the CCGS Sir Wilfrid Laurier at anchor near the Adelaide Peninsula. And then, in my e-mail inbox, come the requests from journalists for images of Franklin, his ships, and Beechey Island. I always say yes.

One figure, however, really says it all: $275,000. This is the amount budgeted for this year's "search" by Parks Canada.  And, as anyone who has done a budget for an Arctic venture of any kind would know, that kind of money won't go very far.  It might enable the launch of the two research boats from the Laurier, and it might pay for a few days of dragging around side-scan sonar equipment.  But in the haystack of possibilities as to the fate of the needles that are Franklin's ships, this effort won't cover more than a few straws.  Sure, they could be lucky straws! But barring that, the effort is, in my view, largely symbolic.  In terms of meaningful underwater archaeological efforts, it's nowhere near what is likely going to be needed, and so I can't think that the government really believes it is one.  Instead, like the planting of Canadian flags on Hans Island, it's really just a symbolic effort, one which makes sense only if the motive is to prop up the narrative of Canadian sovereignty over the Northwest Passage, which it regards as its own internal waters.  This is acknowledged tacitly, and has been the subject of a CBC article, "Franklin Search about Politics as well as History" (and here I think you could substitute "instead of" for "as well as").

My sources in the Canadian Arctic, indeed, alerted me to the presence of the likely search ships in the vicinity some weeks ago; apparently they were waiting for ice conditions to become favorable.  And, despite global warming, this moment is no more predictable than in the past; if the cost of maintaining the ship and crew during the waiting period were added back in, I'm sure it would be more than the quoted figure.  Ice -- like time and tide -- may wait for no man, but waiting costs money, and to me it makes no sense to spend what's already been poured into these efforts without making them much more substantial.  The Harper government seem to want to get their sovereignty chits on the cheap -- a strategy very unlikely to lead to success in terms of actual archaeological progress.  But perhaps that's just fine with them ...
Posted by Russell Potter at 11:17 AM 6 comments: