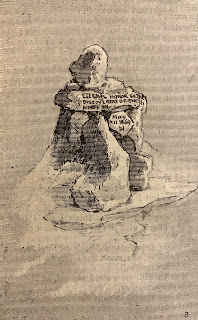 Eternal glory never lasted such a short time as it did on the 'lonely cairn of stones' erected by Charles Francis Hall on King William Island. He'd spent years trying to reach the place, only to be defeated by the constraints of time (his Inuit guides needed to cross  back to the mainland to hunt) and visibility (snow still covered the ground thickly, such that even those of his guides that knew the terrain intimately, couldn't re-locate all of the skeletons they'd seen there in past summers. On a horizontal stone, Hall had scratched the inscription "ETERNAL GLORY TO THE DISCOVERERS OF THE NORTHWEST PASSAGE," but part of the stone with the last few letters (EST PASSAGE) eventually broke off. Below, on a smaller stone, he scratched the date "May XII 1869," adding an "H" for Hall.

And there's another reason most of us haven't seen an image of this cairn before: although Gilder's account of its discovery is well-known, its only known depiction is in Richard Galaburri's pamphlet Lost! The Franklin Expedition and the Fate of the Crews of H.M.S. Erebus and Terror, privately printed and rather hard to find. Years of scouring the Internet for its source had led nowhere, until I tracked down Galaburri himself. He identified it as having come from a December 1880 issue of Harper's Weekly -- a publication of which only scattered copies can readily be found online -- and I was able to obtain a copy from a dealer in rare newspapers.

The article is apparently by Gilder himself, with illustrations credited to "Henry" Klutschak. And yet there's a small discrepancy in this: Klutschak was not among the party that went to visit the site of the cairn; Gilder mentions having made a "quick sketch" but this did not appear in his book. Apparently, Kultschak drew a more professional version based on that sketch -- it appears as slide #29 in Schwatka's lantern lecture to the American Geographical Society that same year -- and this was used as the source by Harper's. The engraver for Harper's probably did a fairly close copy for this depiction, which is opposite the more familiar one of Irving's grave marker, but other elements of his two-page spread are somewhat more freely adapted than the corresponding images in the Illustrated London News or Gilder's book. The confusion over Hall's marker was also accidentally amplified in Stackpole's edition of Schwatka's Long Arctic Search -- he used a set of commercially available lantern slides, and misidentified the slide depicting the Irving marker as Hall's cairn.

These stones have another significance: near them, Hall's guides uncovered a skeleton, which was sent back to England, and for many years misidentified as Le Vesconte's -- it was only when it was examined during the move of the Franklin memorial to the front of the chapel that it was found, by analysis of the teeth and a facial reconstruction, to be far more likely that of Harry Goodsir. The archaeologist Doug Stenton, who's done so much work to re-locate historical sites on King William Island, hopes to use this image to identify the site of the cairn in a future visit.
Posted by Russell Potter at 6:02 AM