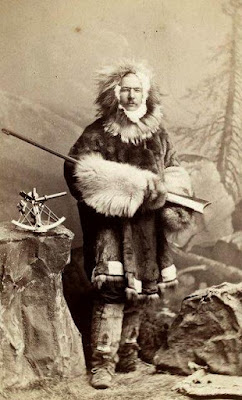 Of all the 19th-century Americans who spent a significant part of their lives searching for traces of the Franklin Expedition, Frederick Schwatka is perhaps the least well-known. Elisha Kent Kane, Isaac Israel Hayes, and Charles Francis Hall have all had their biographers, but Schwatka alone has yet to meet his modern chronicler.1 Part of the problem goes back to his original mission; William Gilder, a newspaperman chosen as his second-in-command, used his ties with newspapers and publishers to make sure that his account of Schwatka's search became the most popular and profitable. Schwatka's own narrative appeared only in obscure periodicals, and was never published in its entirety in his lifetime. And, although he subsequently led two further expeditions into Alaska, Schwatka's addiction to laudanum put an early end to his career as an explorer. He was able to turn his experiences into popular lectures, but his abuse of the substance led to embarrassing incidents; in 1891 he fell from a balcony inside his hotel in Mason City Iowa and was believed for a time to be close to death -- but he recovered. Finally, in 1892, while in Portland Oregon to give a lecture on his Arctic exploits, he overdosed one last time, and was found dead in a doorway, a bottle of the fatal drug still clutched in his hand.

Fortunately, we today have the ability to study Schwatka's own account of his Franklin search in detail. Thanks to the archivists at the Mystic Seaport Museum -- where his manuscript is held -- we can now view the original pages online -- and, thanks to the the diligent work of Jacci Greenlee, we now have access to a .pdf which contains a diplomatic transcript of his entire narrative. These materials will surely be the basis of much valuable research to come, we can now both search the transcript and examine the original manuscript to confirm any doubtful readings. Other sources for Schwatka's life and career include his account of his 1883 expedition in Alaska, the records of the American Geographical and Statistical Society (Schwatka's sponsors), and the published narratives of Gilder and Heinrich Klutschak, the expedition's gifted artist. As one of a relatively few nineteenth-century explorers to value and record Inuit oral tradition, Schwatka -- despite his prejudices about indigenous people -- remains a key figure in the early documentary record, upon which we today must draw if we are to connect historical testimony to modern-day archaeological findings.
1 There have been two near-misses -- Schwatka's granddaughter worked on a biography in the 1950's, but it was never completed or published, though in 1984 her collaborator Robert Eugene Johnson published a "précis" of that biography, running to 26 pages, but no more.↩
Posted by Russell Potter at 6:17 PM 2 comments: