Talk at the National Maritime Museum 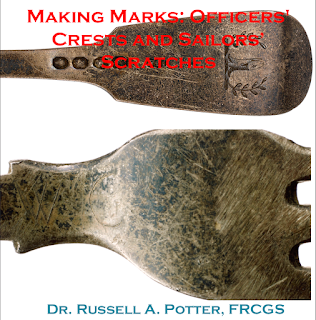 In just a few days, on November 29th, I'll be delivering a lecture, "Making Marks: Officers' Crests and Sailors' Scratches" -- at the National Maritime Museum in Greenwich, UK, in connection with their current exhibit Death in the Ice. It's a lunchtime lecture, hosted by curator Claire Warrior; after my remarks, she and I will have an open discussion, and welcome questions from the audience. The talk will start at noon, and with the discussion will go until 1 p.m.

What is mark-making, some may ask -- and what has it to do with the history of the lost Franklin expedition? In one sense, mark-making is the oldest of all human artistic impulses, going all the way back to the painted handprints in neolithic caves; in an ultimate sense, they all say the same thing: I was here. And, in one sense, that's just what happened with Franklin's men: at some point, probably around the time of his ships' initial abandonment in 1848, much of the silverware that had been brought by the officers was distrubuted to the ordinary seamen of each vessel. The motive may have been to preserve these items, which were of both monetary and personal value -- but it may also have been to communicate with the outside world. The leaders of the expedition at that time -- Francis Crozier and James Fitzjames -- knew that items traded with the Inuit might travel far, and could potentially be recovered by those who would recognize their meaning. For the sailors, though, these items also had personal value, and many of them chose to mark the items they received by

scratching their initials onto them. In some cases, the letters are clear -- the WC on the Franklin fork above is William Clossan, though of course sometimes the initials match more than one man. Some, such as caulker's mate Cornelius Hickey, carved their full surnames, while in other cases the marks are ambiguous -- a scratched A? D? -- or perhaps simply a random pattern. The Inuit themselves sometime modified the utensils, as they did with a large serving spoon from Franklin's service; the bowl having become cracked, they mended it with copper (many Inuit were skilled at re-working and cold-forging metal). These additions allow us to trace, in many cases, the path of the silver item from the officers' mess to the crew of their ship, to Inuit who then exchanged these items with searchers such as Leopold McClintock, Dr. John Rae, Charles Francis Hall, and Frederick Schwatka.

My talk will be illustrated with slides -- many of them the first high-resolution images ever made of the utensils in question -- and will be a reunion of sorts, with items not only from the NMM's own collection, but from museums around the UK, US, and Canada, and even from the island of Jersey, where a lone fork is preserved with other remembrances of Henry Thomas Dundas Le Vesconte, whose family was from there. We'll also have a look at some of the plates recovered from HMS "Erebus" by the Parks Canada underwater archaeology team; some of them, too, have marks that suggest connections between the officers and crews. I'll also show maps of where the spoons were recovered, and what kind of story they tell of Franklin's men once they set foot on land. His ships -- HMS "Erebus" and "Terror" -- will have many tales to tell once archaeologists dig a little deeper into their holds, but until then, these humble souvenirs of ordinary sailors speak volumes as to the final journey their owners undertook.
Posted by Russell Potter at 2:55 PM 3 comments: