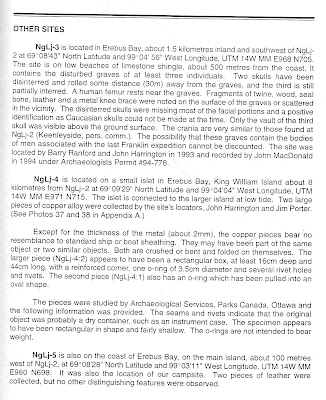 With the news that this year's Parks Canada archaeological work will include both water and land searches, and that the land search will be concentrated around Erebus Bay, I thought I'd share this page from the 1995 report on NgLj-2, the site from which numerous skeletal remains and hundreds of physical artifacts were removed for study. Personally, I feel this area is already fairly-well scoured; last year's highlight -- a toothbrush -- may have shed some light on 19th-century dental hygiene, but not much on the fate of Franklin's men. A far more promising site would be the Todd Islets, where we know that the very last members of one group of Franklin survivors stopped and went no further/

Still, I understand the logistics of such a search -- having the support of research vessels and so forth in accessing remote sites is certainly important! -- so I have a few suggestions.  First off, how about NgLj-3? Two skulls, a knee-brace, and a human femur visible on the surface indicate graves which, as the report notes, may well be of Franklin's men.  The skulls were missing much of their facial portions, so positive identification of them as Caucasoid wasn't possible -- but today, using other techniques it may be possible to say more. That these bodies were at least given something of a burial suggests that they may have died before the final extremities, and the graves may contain other useful materials laid to rest with the men.

NgLj-4 might also be worth a look -- two pieces of copper found there are promising indicators of the presence of men, and perhaps ships, nearby.

I wish the Parks Canada archaeologists all the best -- we all hope they will find things of significance! --  and the land, like the water, may yet have some secrets to disclose.
Posted by Russell Potter at 2:57 PM No comments:

Repost: The Engines of "Erebus" and Terror"

As is well-known, HMSS "Erebus" and "Terror" were both outfitted with ex-railway engines connected to screw propellors. And yet behind that general fact lies a host of detail, including slight variations between the two engines which would, without doubt, enable any searchers to distinguish the wreck of one ship from the other.

With deepest thanks to the fruits of a long-ago correspondence with British railway expert Michael R. Bailey, I thought I'd set out the basic facts, should anyone -- Parks Canada or others -- actually have the chance to recover either engine. As it happens, both were of the "Planet" type originally developed by Robert Stephenson & Co. As Michael describes it, "HMS 'Terror' had a four-coupled (0-4-0) version (strictly a 'Samson' type) built by Robert Stephenson & Co., which was used on the London & Birmingham Railway as a contractor's engine from about 1835 until sold to the Royal Navy in 1845." HMS "Erebus," on the other hand, was fitted with a 2-2-0 "Planet" (see illustration above), but not one built by Stephenson; it was rather a copy produced by the firm of Marshalls of Wednesbury for the London & Greenwich Railway in 1836. Both engines had seen about a decade of service, and were in a sense being "retired" in order to reduce older rolling stock. While they were of closely similar types, the array of the axles, as well as (Michael's note) "the variation in the height of the axleboxes" would enable them to be readily distinguished.

But what sort of shape would these engines be in after more than 160 years? Michael, whose experience is founded upon his work with "Operation Iron Horse," which involved recovering engines from an 1857 shipwreck off the coast of the Hebrides, is confident:

"The components on the 'Terror' and 'Erebus' should all be in good condition in the absence of oxygen. Wrought iron lasts well, unlike steel. The non-ferrous components should be largely unaffected. Their timber outer frames were clad on both sides by wrought iron plates. The plates should still be ok, but the timber may have gone. The condition of the ships' and locomotives will, of course, be quite dependent upon the prevailing sea conditions...... You will know well I'm sure, that iron-work etc. attracts marine life which attaches itself and builds up over the years and can distort the appearance. The main difficulty with the 'Iron Horse' expedition has been that all components have been 'buried' in a large lump of concretion (concreted crustations) and would be quite un-recognisable toa sonar scanner. The divers have had to chip away the concretion with pick to release each component, which is why it has all taken so long. However, it is likely that the crustations have been present because Scotland is on t he receiving end of the 'Gulf-stream' and is thus 'warm-water', and hence very different from King William Island."

So far, the engines have eluded all attempts at finding them. David Woodman spent a great deal of time and energy hauling a magnetometer over the seasonal ice in areas where Inuit testimony indicated one of the ships had been anchored, in hopes that either engine would produce a notable magnetic "signature" -- but all of the the targets he identified turned out to be large rocks and other natural phenomena. I don't know whether Parks Canada has or will employ similar techniques this season, but I do hope that, if they do find something, they're able to call upon the expertise of someone like Michael Bailey.

NB: Since this post, more detailed and accurate information has been developed by Peter Carney, and is given in some detail at the Building Terror blog.
Posted by Russell Potter at 6:00 PM 5 comments: 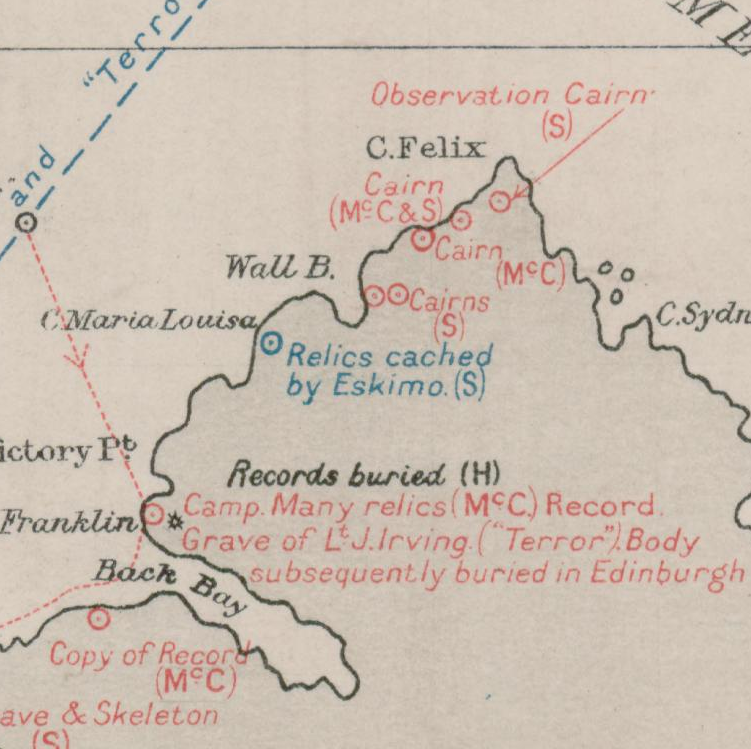 The writer of the so-called "Peglar Papers" -- a cache of personal documents and letters found with the remains of one of the ships' stewards -- spoke of "the grave at Comfort Cove" (well, actually, as he preferred to write backwards, he spoke of "eht evarg ta Trofmoc Evoc"). A person of great importance was buried there, possibly Franklin or Crozier or one of the other officers. The name was borrowed, with what seems to us some irony, from the "Comfort Cove"on Ascension Island, which featured a graveyard adjacent to an isolated quarantine camp -- a site since re-dubbed more accurately as "Comfortless Cove." You can see images of it online, and they suggest not so much a place of refuge as one of (final) rest.

But where could this place be? No maps survive among the scraps of paper remaining to us, so it's impossible to know what names Franklin's men assigned to various land or water features. Still, if Franklin himself was buried there, then it must have been established by 11 June 1847. It must have been close enough to the ships that several parties -- those who were to dig the grave, and those who were to preside at and attend the funeral ceremony -- could reach the site. With "Erebus" and "Terror" still some distance NW of King William, this suggests a site nearer to Cape Felix than to Victory Point. I've been discussing this puzzle with Glenn M. Stein and others, and it seems to me one of those things that might best be solved by more heads than two. So let's have at it -- you can get a variety of free maps and satellite images from GeoGratis or (better yet) zoom in on Rupert Thomas Gould's invaluable Franklin search map of KWI from 1927; you can also look at the maps and reports prepared by David C. Woodman on his many search expeditions. What says the wisdom of the crowds?
Posted by Russell Potter at 7:30 AM 3 comments: