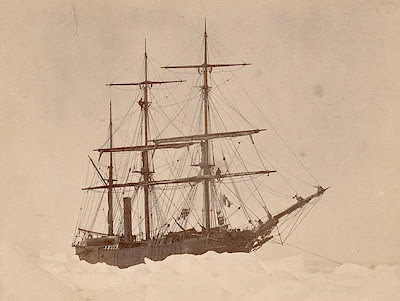 The American artist William Bradford chartered annual excursions for photography and ice-painting nearly every year from 1861 to 1867. In 1869, aboard the Panther, with the explorer Isaac I. Hayes as their guide, Bradford and his fellow artists journeyed father north than any such party had managed before, venturing deep into Melville Bay before being turned back by the implacable barrier of pack-ice at about 75º north. In his quest to make the most of his northern sojourns, Bradford regularly brought along hired photographers to take studies of every scene. Two of these, John L. Dunmore and George P. Critcherson, accompanied him on the Panther, making hundreds of wet-plate collodion images, from which Bradford later drew from to assemble the massive elephant-folio volume, The Arctic Regions.

Today, one hundred and forty-three years later, the Chasing the Light voyage, with the support and sponsorship of the New Bedford Whaling Museum along with private donors and contributions pledged via Kickstarter, aboard the expedition trawler Wanderbird, will re-trace Bradford and Hayes's voyage.  This, too, will be a ship of artists, photographers, and polar guides, and it will call at many of the same ports in West Greenland as did the Panther.  This twenty-first century voyage will dramatize the many differences between 1869 and 2012, as well as the potential parallels; in particular, it celebrates the work of photographer Rena Bass Forman (1954-2011), whose sepia-toned gelatin silver prints so richly evoke the work of Dunmore and Critcherson, while at the same time capturing with a different eye the rich panoply of nature-sculpted shapes of ice and water in the Arctic. As with Bradford's voyage, it is of course impossible to predict what works and visions will come forth from this boreal sojourn, but unlike his voyage, we will not have to wait until its return to glimpse at least some of them.  Using modern satellite technology, there will be regular updates on the voyage's progress via the Twitter reincarnations of both Bradford and Hayes.  Some of the results of the trip wil also be part of a forthcoming exhibition, Arctic Visions: Away Then Floats the Ice-Island, opening in March of 2013 at the New Bedford Whaling Museum.  It would be hard to imagine a better venue, as the Museum houses the finest collection of Bradford's canvasses in the world, along with a number of the original glass plates exposed by Dunmore and Critcherson under Bradford's direction.  I hope that readers here will join me in eagerly following these results!

At the same time, it seems peculiarly ironic that, just as this voyage is about to set sail, the news comes via NASA of an unprecedented meltoff of the Greenland ice cap.  The alarming, sudden nature of this melt may foreshadow further changes in the earth's climates; the Arctic has always been a bell-weather for the rest of us.  And, according to ice core studies, the last time such a melt is known to have occurred is roughly 150 years ago -- very close indeed to the date of Bradford's original voyage.
Posted by Russell Potter at 7:47 AM 1 comment: