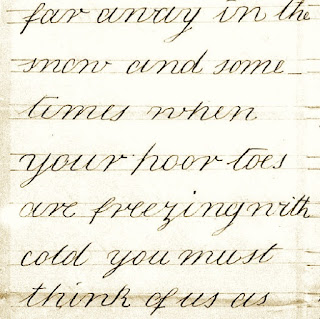 Among the many correspondents in our forthcoming book of letters, two of the very youngest stand out from all the rest, both for their sincerity and heartfelt feelings, and also for the sweet, childish humor that still shines forth from their carefully-penned missives.

James Fitzjames was so struck by the letters that he enclosed them with one to his sister-in-law Elizabeth Coningham, with this preamble:

"I leave you these two letters from my little friends – as I am sure any-thing that gave me pleasure will gratify you ... perhaps you will think I am foolish to care for the little children’s letters – but so it is – I am as much pleased with their expressions of regard – exaggerated though they be – as I should be with the more studied, but probably not so genuine, effusions of many grown people."

The children in question were Eliza Francis ("Fanny") and Maria Jane Campbell, the daughters of Fitzjames's friend Henry Dundas Campbell, a decorated soldier and later a colonial governor who had befriended Fitzjames early in his career, helping him secure his appointment as Midshipman in 1831. Fanny would have been around twelve years old,  and Maria a year younger. Writing in her best school hand, Fanny expressed her sentiments as well as any adult:

"I am very sorry indeed to hear you are going to leave England so soon we shall think of you when you are far away in the snow and some times when your poor toes are freezing with cold you must think of us as we shall be longing for your return."

Maria's letter was more chatty, expressing the regret that Fitzjames could not visit them again until his return, adding "I hope you will not forget us when you are in among the snow and when you come home you will pay us a nice long visit." She closed her letter "Your ever affectionately and attached friend, Maria Jane Campbell" and then added a curious postscript: "Missie says just as if you care a fig for our attachment to you."

This annoying "Missie" may well have been their older sister Harriet, who would have been about sixteen at that time, just the age for such a jovially mocking riposte. It must surely have greatly amused Fitzjames, who was always prone to jest in prose, and touched him more deeply than these young writers may have realized. He closed his letter to Elizabeth with this salutation to her and William:

"I think the love of a child is a thing not to be thrown away lightly.
There are some grown up people too, whose love I would not exchange for any worldly good. And of these I need not say you & William stand far highest in the heart
of your affectionate
James Fitzjames"

Posted by Russell Potter at 3:00 PM No comments: