The Hand of Crozier?

When my fellow researcher and member of the "Remembering the Franklin Expedition" Facebook group Alison Freebairn discovered the Beechey paper treasure in the National Archive (see the previous blog post) I was coasting along Norway in a Hurtgruten ship and could only look at the scraps with my phone. They looked interesting, and some of the contents made me think of magnetic observations, but every time I tried to zoom in on one of the photos it took ages -- Internet reception along the Norwegian coast can be quite poor when you leave the coast for the open sea. So I thought I would look at them on the computer when I got home, which had to be postponed – it seemed that, every evening, something else came up. It was only when I saw her lovely guest post yesterday that I finally decided to take a casual flick through the images, on the bus on the way to work.

These papers, found by Franklin searchers in 1850-51 on Beechey Island are always described as one scrap of paper in Fitzjames's handwriting most likely having to do with magnetic observations, along with some newspaper articles. One of the scraps is clearly in James Fitzjames's somewhat unruly handwriting but when I came to the other paper (or rather two pieces that clearly belong together) I felt a sudden sense of vertigo -- it was as if Francis Crozier was waving at me from the depths of my phone. It was quite surreal. I know his handwriting pretty well as I’ve spent two years transcribing every scrap written by him that I could find across the world. So even without a direct comparison on the bus I thought it was highly possible this was written by him; I sent Russell, Alison and Logan Zachary, another fellow researcher and digital wizard, my thoughts.

After a long day at work itching to get home I finally started to compare handwriting samples by Fitzjames and Crozier with the pieces of paper. I think it is pretty obvious that the two parts that deal with what I think are instructions for erecting a portable observatory are not written by the same person that wrote about observations in 2.5 minute intervals (which, by the way, points towards the time consuming observations of several delicate instruments on an international magnetic term date – a quite interesting fact. These term days happened every month for the remainder of 1845; the first feasible for the Franklin Expedition was the one on August 29th). 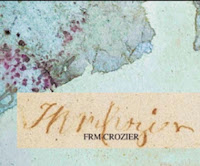 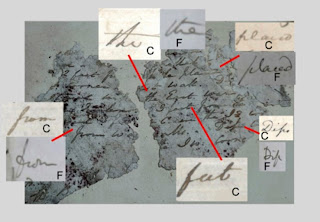 The other scrap – or rather two scraps – is in my eyes part of instructions on how to put up one of the portable observatories which were carried by each ship and put on shore whenever possible. The comparison of the handwriting samples certainly rules out Fitzjames as the writer, and in my opinion it looks very similar to Crozier's hand. At left is a comparison of the two hands. And above right, a comparison by Logan Zachary who thinks that we can probably see the reminder of Crozier's signature which I think is very possible indeed.

NEXT: The significance of Crozier's writing on this document.
Posted by Russell Potter at 4:00 AM