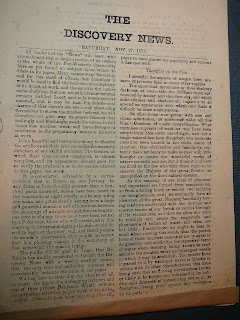 When it comes to newspapers printed with moveable type on board Arctic vessels, the least well-known of all is surely The Discovery News, which was published during George Strong Nares's 1875-1876 expedition aboard "Discovery" and "Alert." Printed in two columns on broad quarto-sized sheets, it fully answered to the word "newspaper," differing chiefly by its lack of advertisements and its (necessarily) limited circulation. It was launched with high hopes, as described in the diary of Matthew Miller, Asstant Engineer: "October 15, 1875: The Editor's Box for contributions to the newspaper was fixed upon today, outside of the Naturalist's cabin [Henry Chichester Hart], who has been elected Editor thereof." In November, Miller noted with satisfaction that "Our paper that I have casually mentioned has, by dint of perseverance on the part of the Editor and Printer, been brought out in the form of 2 sheets of closely printed matter of interest to those on board." The copy shown here, from a private collection, is dated Nov. 27, 1875. It mentions an earlier issue published on Nov. 19, and notes that the printer was Benjamin Wyatt. Exactly how many issues were printed may never be known; it's not mentioned again in Miller's diary, and there's no reference to it in Nares's published narrative. It's a shame, since in terms of quality of printing, it's among the finest and most ambitious of all Arctic newspapers.
Posted by Russell Potter at 10:19 AM 2 comments: 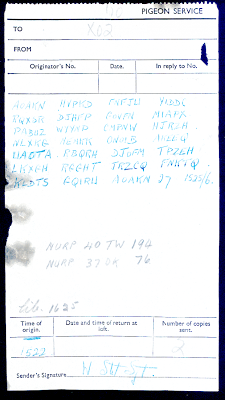 A few weeks ago, news broke of a WWII-era carrier pigeon, whose bones were recently found in a chimney in Surrey. And, more remarkably, attached to one of the deceased bird's legs was a small red cylinder which still contained its original encrypted message! There was a good deal of excitement, and the hope was widely expressed that the message could be decrypted, until it turned out -- according, at least to the GCHQ, the UK government's agency for such things, that the message could not be decrypted, since it apparently had made use of a "one time pad," a form of encryption which, assuming its key is truly random and is only used once, is impossible to break.

It may well be that the message itself will never be known, but, thanks to Nick Pelling and followers at his Cipher Mysteries blog, it turns out one can still learn a good deal about it. The message was signed, after all, by one "W. Stot Sjt" -- the "j" in "Serjeant" makes him a British Army NCO, as the name of that rank was spelt with a "g" in other branches of service -- so Pelling and company tracked him down and identified him as Lance Serjeant William Stout.  Stout, who died of wounds suffered on D-Day and was buried in France, and had a brief but spectacular moment of service in that campaign, apparently managing almost single-handedly to disable several German gun emplacements that lay between his unit's tanks and their goal of Caen. If sent by him, then, the message must have been dispatched on D-Day itself, and may well have consisted of a request for aerial bombardment of certain targets related to this operation, and (possibly, but I think less likely) a note that Stout had been gravely wounded. I would guess that the message was more likely sent prior to Stout's heroic actions, but unless it's eventually deciphered we may never know. Pelling also points out that that the pencilled addendum -- "lib. 1625" -- must have been made by a French speaker, since lib. was almost certainly short for "libéré" -- set free, the time of the pigeon's release for the homeward flight.

And that was when I noticed something odd, something that reminded me of a recent post of mine here about the Greely expedition's "Arctic Moon" newspaper: why were the cipher text, the Serjeant's signature, and the "Time of origin" filled out in blue, while the pigeon's name and number and time of release were written in pencil by a Frenchman?  The blue could, I suppose, have been a ball-point pen (a luxury item hard to obtain in wartime) or, perhaps the original message was, in fact, a hectograph. The pencil-weilding Frenchman indicated that there were two copies; how better to make them quickly than to use a hectograph?  The Serjeant would, with a pre-supplied form, have written the ciphertext master; this would have been taken to the officer in charge of actually dispatching the birds.  He would then have used it to make two hectographic copies, adding the details on each bird to both copies just prior to their release, and then destroying the original.  But were hectographs used at this time for this purpose? Yes indeed, according to this page, which details the work of a young woman, Pauline Gorman, who served at the Allied Forces headquarters in North Africa:


[Gorman] also operated a hectograph machine, a printing process which involved the transfer of an original, prepared with special inks, to a pan of gelatin or a gelatin pad pulled tight on a metal frame. Hectography, which required limited technology — and left few traces behind — could be used in clandestine operations.

The traces left by this process are apparent on the image of the original shown above: at the sixth line of cipher text, the bottom and part of the middle of the last two five-letter groups is oddly darker than the surrounding text, in a way that does not seem to correspond with likely variations in the pressure of a pen.  There's also some unusual touch-up at the left of the line above in the group "UAOTA." This could have been made with a hectograph pencil, the same as used for the original master copy, if (as may have happened) the duplication left these letters indistinct.

The use of the hectograph explains why a message encrypted by a British Army NCO would have been sent and marked by a French soldier -- the Frenchman was at a different location, where the birds were kept, and was using a hectograph to make copies, a good idea given that a single message would have had a far lesser chance of reaching its destination.
Posted by Russell Potter at 8:40 AM 5 comments: