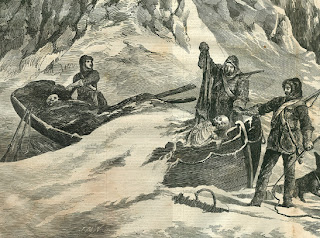 It's probably the best-known symbol of the failure of the Franklin expedition -- the whaleboat, loaded with all manner of material that added to its weight, drawn upon an enormous sledge with iron runners -- which some party of survivors dragged to their doom. McClintock described this "melancholy relic" in great detail:


"A large boat, measuring 28 ft. in extreme length, 7ft. 3 in. in breadth, 2 ft. 4 in. in depth. The markings on her stem were —" XXI. W. Con. N61., Apr. 184." It appears that the fore part of the stem has been cut away, probably to reduce weight, and part of the letters and figures removed. An oak sledge under the boat, 23 ft. 4 in. long, and 2 ft. wide; 6 paddles, about 60 fathoms of deep-sea lead line, ammunition, 4 cakes of navy chocolate, shoemaker's box with implements complete, small quantities of tobacco, a small pair of very stout shooting boots, a pair of very heavy iron-shod knee boots, carpet boots, sea boots and shoes—in all seven or eight pairs; two rolls of sheet lead, elm tingles for repairing the boat, nails of various sizes for boat, and sledge irons, three small axes, a broken saw, leather cover of a sextant case, a chaincable punch, silk handkerchiefs (black, white, and coloured), towels, sponge, tooth-brush, hair comb, a macintosh, gun cover (marked in paint "A.12"), twine, files, knives; a small worsted-work slipper, lined with calfskin, bound with red riband; a great quantity of clothing, and a wolfskin robe; part of a boat's sail of No. 8 canvas, whale-line rope with yellow mark, and white line with red mark; 24 iron stanchions, 9 inches high, for supporting a weather cloth round the boat; a stanchion for supporting a ridge pole at a height of 3 ft. 9 inches above the gunwale."

But that was far from all. Most poignant, perhaps, were the books -- those chosen from the shipboard library as worthy of hauling onwards -- and the silver plate, originally that of the officers, which had apparently been distributed to the sailors:


Five or six small books were found, all of them scriptural or devotional works, except the Vicar of Wakefield. One little book, Christian Melodies, bore an inscription upon the title-page from the donor to G. G. (Graham Gore). A small Bible contained numerous marginal notes, and whole passages underlined. Besides these books, the covers of a New Testament and Prayer-book were also found.

And, scattered amidst the rest, a flood of miscellaneous items:


"Amongst an amazing quantity of clothing there were seven or eight pairs of boots of various kinds—cloth winter boots, sea boots, heavy ankle boots, and strong shoes. I noted that there were silk handkerchiefs—black, white, and figured—towels, soap, sponge, tooth-brush, and hair-combs; Mackintosh gun-cover, marked outside with paint A 12, and lined with black cloth. Besides these articles we found twine, nails, saws, files, bristles, waxends, sail-makers' palms, powder, bullets, shot, cartridges, wads, leather cartridge-case, knives—clasp and dinner ones, needle and thread cases, slowmatch, several bayonet scabbards, cut down into knife sheaths, two rolls of sheet-lead, and, in short, a quantity of articles of one description and another truly astonishing in variety, and such as, for the most part, modern sledge travellers in these regions would consider a mere accumulation of dead weight, of little use, and very likely to break down the strength of the sledge crews. The only provisions we could find were tea and chocolate; of the former very little remained, but there were nearly 40 lbs. of the latter. These articles alone could never support life in such a climate, and we found neither biscuit nor meat of any kind. A portion of tobacco, and an empty pemmican tin, capable of containing 22 lbs. weight, were discovered. The tin was marked with an E; it had probably belonged to the 'Erebus.'" (italics mine)

The sheer quantity of material spoke of men, who, in their last necessity, had been unwilling to part with personal items or material that would be of little practical use on land. And then, as McClintock wrote,


"All these were after observations; there was that in the boat which transfixed us with awe. It was portions of two human skeletons. One was that of a slight young person, the other of a large, strongly-made middle-aged man. The former was found in the bow of the boat, but in too much disturbed a state to allow Hobson (McClintok's lieutenant, who'd found the boat first) to judge whether the sufferer had died there; large and powerful animals, probably wolves, had destroyed much of the skeleton, which may have been that of an officer ... the other skeleton was in a somewhat more perfect state, and was enveloped with clothes and furs; it lay across the boat, under the after-thwart."

In a footnote, McClintock notes that -- contrary to period engravings such as the one above -- "No part of the skull of either skeleton was found, with the exception of the lower jaw of each."

Today, the enigma of this boat -- why it was pointed back toward the ships and not to the Fish River, why it was so overloaded with useless materials, and who its last defenders had been -- is one of the most fascinating puzzles of the larger Franklin mystery. One can, though, thanks to the National Maritime Museum, search one's self and find nearly all of the relics described above.
Posted by Russell Potter at 2:37 PM 15 comments: