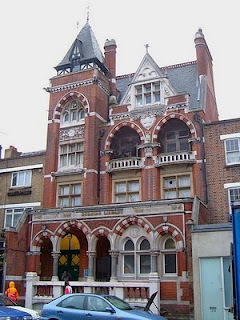 On Monday, 17th January, the Victorian-era splendor of the Durning Library will host a talk by William Battersby on the life and career of James Fitzjames, based on his research for his recent book James Fitzjames: Mystery Man of the Franklin Expedition. For those who may not be familiar with this remarkable venue, it's in the borough of Lambeth and readily accessible from central London; the address, for Google and GPS users is 167, Kennington Lane, London, SE11 4HF, a brief walk from the Kennington tube station on the Northern line.
Mr Battersby's talk is hosted by the Friends of the Durning Library; it begins at 7:15 p.m.; according to the description on his blog page, "The Friends will provide light refreshments and there is no admission charge, although a £2.00 donation is suggested." Among the many other aspects of this fascinating subject, Mr Battersby promises to touch on "the intriguing links between Kennington and James Fitzjames himself." It's certainly an event which I would very much want to attend, were I to be anywhere in the greater London area on that evening; for those who are unfamiliar with Mr Battersby's book on Fitzjames, I recommend it highly -- there's much within that has never been guessed at by earlier Franklin researchers.
[Photo of the Durning Library by Derek Harper]
Posted by Russell Potter at 4:34 PM 1 comment: 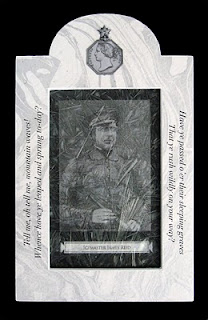 A few months ago, in one of my installments on Franklin Curiosities, I mentioned the small toy replica tins of Goldner's Patent Provisions crafted by Ron Toelke. Since then, I was very pleased to be able to get back in touch with Ron, and learn about some of his more recent artistic creations. Among the most remarkable of these, without doubt, are the portraits in his series A Sorrower on the Sea of Doubt. Based upon the famous Franklin daguerreotypes taken by Beard and his assistants in 1845, these portraits each incorporate Toelke's hand-cut portrait of the sitter on metallic paper, along with four lines from the poem, Lady Franklin's Appeal to the North, first published in the New York Times on October 18, 1851. Each portrait is framed on tombstone-shaped marbled paper, surmounted with an image of the Arctic Medal with the north star at its peak. The cover glass of each portrait is treated with a special finish that crystallizes into its own unique icy pattern. Although I have not seen one of these works in person, they're certainly among the most striking contemporary versions of the portraits of Franklin's men that I know. The collection takes its name, "Sorrower on the Sea of Doubt," from the last line of the poem.

Toelke's many other projects are no less commendable; he has another toy set, Battleships of the World, which are wonderfully crafted of wood, paper, and paint. He is also at work on a set of Arctic playing cards, which will be based in part on similar souvenir decks produced in the 1850's, with illustrations taken from the books and illustrated papers of the day. To my mind, this is just the sort of artistic endeavor which brings together the fascination with the old with a new sense of what craft and care can produce; no Franklin collection would be complete without something of his work.
Posted by Russell Potter at 5:50 PM No comments: