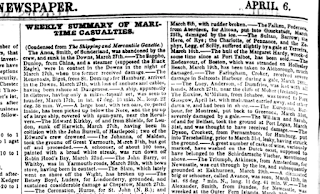 Over the years, numerous Franklin experts, from R.J. Cyriax to A.G.E. Jones to William Battersby, Glenn M. Stein, and myself, have pondered the faded, backwards-lettered and enigmatic leaves known as the "Peglar Papers," which have been dubbed "the dead sea scrolls of the North." What to make of songs about turtles, references to grog shops, and the infamous "Party Wot Happened in Trinidad"? The damage to ink and paper has only amplified their inscrutability. And yet, all along, there has been one readily readable document among the Papers that no one had bothered with: the clipping from Lloyd's Weekly News-Paper that was stuck in the back of the leather wallet in which the papers were contained.

Only a few words of this crumpled clipping are legible -- enough, however, for me to identify it as the "Weekly Summary of Maritime Casualties" published in Lloyd's on April 6, 1845. It seems a likely thing for a sailor to bring with him -- and one may speculate that perhaps the news in its columns related to some loss of life that touched the owner of the papers personally. Unfortunately, nearly all the ships mentioned in the column -- you can view it in its entirety here -- are merchant vessels, and nothing resembling a crew's list can be had for most of them. It's possible also that, as Glenn M. Stein has suggested, it was not a man but a ship, upon which the Franklin sailor had served, that was significant (we know from Glenn's work and that of Ralph Lloyd-Jones that a goodly number of Franklin's men had spent some part of their careers on merchant ships).

That, at least, opens some leads: among these vessels we have "The Lucy, of Dumfries, master John Anderson, lost off the Cliffs of Moher with all hands," the "Edward Kirkby, of Shields, sunk after a collision with the John Burrell," "The Fox, of Inverness, found adrift," "the Margaret Cunningham, sunk at Grimsby Roads" and the "Alexander, master Smith, from Dundee, wrecked at the Outer Fern Islands."

The Lucy offers one enticing possibility: her home port was Dumfries, and the registry shows that among her owners was one William Reid of Liverpool. The surname is the same as that of James Reid, ice-master aboard the "Erebus," but I have not as yet been able to draw a firm connection; the name is common enough.

The column also noted a collision between the Sappho and H.M.S. Black Eagle, which gives us a bit more to go on. Black Eagle, formerly Firebrand, was a paddle-wheel steamer noted for her powerful engines; her collision with the Sappho led to a court of inquiry at the Admiralty, which in part got caught up in the debate over steam versus sail. The Black Eagle being a Royal Naval vessel, we know that her commander was Charles Yorke (the Earl of Hardwicke); her officers included Henry W. Allen (second master), E.B. Stewart (1st Lieutenant), W. Peel (Lieutenant), H.T.S. Bevridge (assistant surgeon) and P.W. Coventry (mate). I have not yet traced any connection between these men and Franklin's, though Yorke's name was later given to a cape on northern Baffin Island.

Perhaps most significantly, though, H.M.S. Black Eagle was part of the Royal Squadron, based in Woolwich, which would have put it in very close proximity with "Erebus" and "Terror." The Morning Chronicle of 26 April describes a visit by the Lords of the Admiralty to Her Majesty's Dockyard at Woolwich to "look in on the progress" of the vessels' re-outfitting. One can imagine friendships forming between the crews of ships so near, and perhaps the news of the collision signified in that way.

Some are skeptical of the significance of this little paper -- perhaps it was merely a handy scrap, stuck in the wallet by happenstance. Perhaps, even, it wasn't the shipping news, but the other side of the scrap that was wanted -- it contains an advertisement for the plays available in Cumberland's British Theatre, a sourcebook for plays that could have been used in the staging of ship-board dramas. We may never know for certain -- but that someone had this clipping with them, and carried it to their death on King William Island, can surely not mean nothing.
Posted by Russell Potter at 4:18 PM 4 comments: