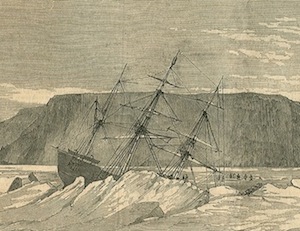 The Franklin search ship HMS Breadalbane was caught or "nipped" by pack-ice and sank on Sunday 21 August, 1853; according to one crew member, "it was a very sad and unceremonious way of being turned out of our ship -- from the time the first nip took her, until her disappearance, did not occupy more than fifteen minutes."  Aside from landing some stores at Cape Riley, the Breadalbane had not lasted long enough to make much of a contribution to the search for Sir John, but its history since then has been full of interest and significance.  Until the re-discovery of M'Clure's "Investigator," she was the furthest-north known shipwreck in the world, and the search to find her, recover artifacts, and learn from the wreck site has stretched over nearly forty years, and took an interesting turn last week when divers working as part of the Canadian military's Operation Nunalivut explored the wreck using a submersible ROV, sending color video images to the surface.

The wreck was not far off Beechey Island, and its general location fairly readily ascertained. The first definite evidence of the wreck was located by diver Joe MacInnis in 1975; based on his evidence and subsequent searches, a Canadian Coast Guard vessel discovered the wreck using side-scan sonar in 1980. Remarkably, her hull was largely intact, and two of her masts will still standing, one of which still seemed to be carrying some portion of canvas.  MacInnis later led several dives to the wreck, and retrieved the ship's wheel.  This and his earlier searches were described by him in his book The Breadalbane Adventure, which featured an introduction by Walter Cronkite.

MacInnis later hit on the idea of setting up a seasonal camp on the ice, and taking aquatic tourists down to the wreck at thousands of dollars a pop.  To that end, he purchased a number of large mobile dwellings, had them shipped to Resolute, and fixed to skids so they could be towed out onto the ice by tractor.  The hoped-for number of tourists never materialized, and when I was at Resolute in 2004 the mobile units could still be seen, abandoned, a few hundred yards from the main port.

You might think that all the archaeological knowledge possible had already been retrieved from the Breadalbane, but this didn't stop Canadian Forces divers from searching the wreck again this April.  The annual northern military exercise in Nunavut, though it mostly involves staged search-and-rescue operations, is also geared toward strengthening Canada's claim to its northernmost territories, and apparently nothing spells "sovereignty" quite so well as a sunken Franklin-era vessel.  Nothing new was discovered, so far as I know, though the online video shows some intriguing images.  There's also a fairly detailed account of the dive on the Canadian Forces' own website here.
Posted by Russell Potter at 11:24 AM 1 comment: 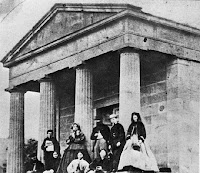 IN the spirit of Lady Franklin's Appeal to Lord Palmerston, I've just done something I've never tried before -- launch a petition.

The background is this: Near Hobart in Tasmania, the original Greek-style temple dedicated by Lady Franklin as the centerpiece of botanical garden and museum she named Ancanthe still stands.  Not surprisingly, there has been a fair amount of incursion over the years, with some of the original land now occupied by homes.  Recently, there was a proposal brought to Hobart City Council for a new subdivision which would much further encroach upon the area, and destroy much of its character,  A group of citizens fought back, and are making a counter-proposal that Hobart acquire much of this same area as public lands, and establish there a) A botanical garden, a project not quite realized in Lady Franklin's time, and neglected since; b) A restored museum and grounds, with a "Franklin trail"; and c) an 'international centre of excellence.'

The city council may be persuaded to back the plan, but first they are asking for evidence that the site is one of internationally-recognized historical and cultural significance.  This is something beyond the quick reach of the citizens of Hobart who support this plan, so I've volunteered to enlist all the "Franklinites" I know in its support.

You can read more about the situation on the Saving Ancanthe Facebook page here.

And, if you choose to sign the petition, it's here.

Lastly, if you know of others, whose names I have perhaps neglected to include here, who could lend their heft to the affair, I'd be grateful if you could forward this request.

I hope you'll decide to join me in this effort to preserve a small patch of Franklin history in Tasmania.
Posted by Russell Potter at 6:11 AM No comments: 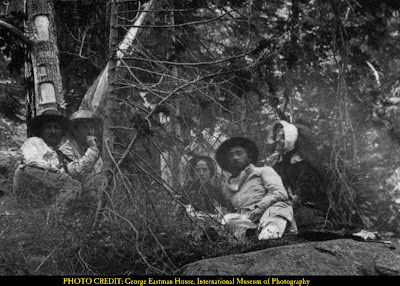