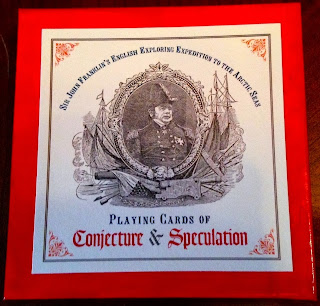 I've written before about the marvelous creations of graphic artist Ron Toelke -- his miniature can of Goldner's Ox-Cheek soup, and the portrait series "Sorrower on the Sea of Doubt," based on Richard Beard's haunting portraits made on the eve of Sir John Franklin's departure for the Arctic in May of 1845. Toelke has a gift for combining graphical elements taken from period books and newspapers with shapes and forms that give these images a figurative -- and sometimes literal -- third dimension of sorts. They are as delightful to the hand as they are to the eye, and this has never been more so than with his latest undertaking, the "Playing Cards of Conjecture and Speculation" featuring texts and images from Franklin's expedition.

The cards come in a box, as shown above, which includes a small side-compartment featuring Arrowsmith's charts of the area of the central Arctic into which Franklin was sailing; Franklin's directions from the Lords of the Admiralty are also included on a folded paper. The cards themselves are  drawn from several sources; the court cards depict Franklin and his men, based on Beard's Daguerreotypes; the number cards contain excerpts from an 1852 book entitled "Sir John Franklin and the Arctic Regions: With Detailed Notices of the Expeditions in Search of the Missing Vessels Under Sir John Franklin, by P.L. Simmonds, Many Years' Editor of the Colonial Magazine, etc. etc. To Which is Added and account of the American Expedition Under the Patronage of Henry Grinnell, Esq." This volume, the work of one Peter Lund Simmonds, a prolific author whose works included 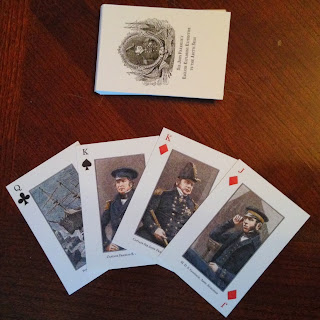 The Curiosities of Food, Hops, their Cultivation and Use, and Waste Products and Undeveloped Substances, was an ambitious digest of the Franklin search to date, published to coincide with the news brought back by the first Grinnell expedition. The section of the book from which Mr. Toelke took his texts is aptly entitled "Opinions and Suggestions." Speculation about Franklin's fate was rampant then -- and indeed, it is rampant still; the title of this set evokes the card game known as "Speculation," which was popular in Jane Austen's day. One could, if one chose, aptly play that game with these cards, with the added feature that every card discloses another detail or conjecture about the disposition of Franklin's men.

N.B. Although Simmond's 1852 book doesn't appear to be available online, a revised and updated version, published to coincide with the British Arctic expedition of George Strong Nares, is available at archive.org.

Posted by Russell Potter at 1:41 PM No comments: 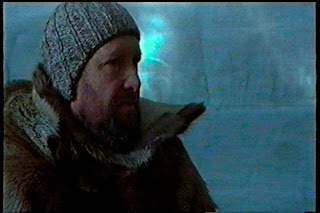 There's been plenty of speculation -- and disagreement -- over the possible role of internecine conflict among Inuit bands in the fate of the Franklin expedition. There certainly does seem to be evidence that, by the early 1860's if not somewhat earlier, a particular band of Netsilingmiut were acting aggressively toward neighboring bands, scaring away many members of (for instance) the Utjulingmiut, and raising such fear that Hall's guide Ebierbing at first refused to conduct him further into the more westerly areas. This hostility may well have originated, I suspect, with the conflict over the enormous wealth that even a single Franklin vessel would have represented to the Inuit, in terms of metal, wood, and other useful items.

But there is another possibility: conflict between Inuit and the more southerly sub-Arctic tribes that they called the "Itqilit" (a word Hall mis-transcribed many ways, most often as "Et-ker-lin"). The animosity between Inuit and their southerly sub-Arctic neighbors was of great age and well-known -- Hearne witnessed an example of it firsthand at the Bloody Falls -- and pervasive. It's also possible the these sub-Arctic tribes had conflicts with some of Franklin's men who wandered into their hunting areas; indeed, there are a several stories in Nourse's edition of Hall's second expedition narrative in which Inuit described an attack on Franklin's men by "Et-ker-lin." In one story, "Aglooka" is said to have gotten a cut on his face during such an attack. These stories are somewhat vague, and are tied up with the problematic second-hand evidence offered via "the cousin" (Too-shoo-art-thariu) so I'm not sure how much faith can be put in them -- but still, they are suggestive. There's even an account, written by Hall at the end of his second expedition, which suggests that he believed that the last two survivors -- "Aglooka" and one other man -- may have been murdered while trekking down the western shores of Hudson's bay by Et-ker-lin. Could Franklin survivors have been mistaken for Inuit by hostile neighbors? David Woodman has shown that it's quite possible that small  groups of Franklin's men were mistaken for Itqilit by Inuit; certainly the reverse is possible.
Posted by Russell Potter at 7:53 AM 1 comment: