The Last Leaves of a Sorrowful Book 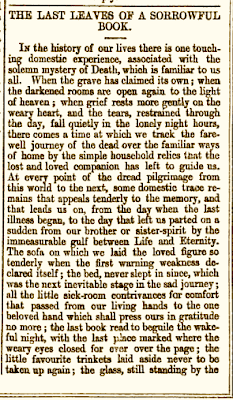 Appearing, as fate would have it, just a few weeks before McClintock's news of the fate of Franklin reached England, "The Last Leaves of a Sorrowful Book" captured the elegiac public sentiment about the lost explorers, picking up on passages from letters home from one of Franklin's officers. Their author, of course, was James Fitzjames, Franklin's second aboard HMS "Erebus," and easily one of the most capitvating figures on the expedition -- young, full of energy and passion, and (at one point) expressing his hope to spend 'at least one winter in the ice.' The letters had been reprinted before, in a nautical journal (without Fitzjames's name), though it was fairly clear then that the author must have been one of Franklin's officers on Franklin's vessel. Many years later, these letters formed the inspiration, as well as the opening passages, of John Wilson's novel, North With Franklin: The Lost Journals of James Fitzjames.

This version, published in Charles Dickens's journal All the Year Round, opens with a lyrical elegy to the letters' author, framed in terms of the common fate of death that awaits us all, and the ways in which small relics of the departed still testify to their presence:

At every point of the dread pilgrimage from this world to the next, some domestic trace remains that appeals tenderly to the memory, and that leads us on, from the day when the last illness began, to the day that left us parted on a sudden from our brother or sister-spirit by the immeasurable gulf between Life and Eternity. The sofa on which we laid the loved figure so tenderly when the first warning weakness declared itself; the bed, never slept in since, which was the next inevitable stage in the sad journey; all the little sick-room contrivances for comfort that passed from our living hands to the one beloved hand which shall press ours in gratitude no more; the last book read to beguile the wakeful night, with the last place marked where the weary eyes closed for ever over the page; the little favourite trinkets laid aside never to be picked up again; the glass, still standing by the bedside, from which we moistened the parched lips for the last time; the handkerchief which dried the deathly moisture from the dear face and touched the wasted cheeks almost at the same moment when our lips pressed them at parting—these mute relics find a language of their own, when the first interval of grief allows us to see them again.

It's quite an astonishing passage, and for many years, its author was unknown. Unlike Dickens's previous journal, Household Words, the contrubutors' book for ATYR was lost, and until quite recently no one had any means of verifying who had written a given piece (there were no by-lines). But recently, with the discovery of a set of ATYR annotated by Dickens himself, these hundreds of little mysteries have been at an instant solved -- and, though I'd long guessed that Dickens himself was the writer, it turns out that it was Wilkie Collins, whose play, The Frozen Deep, had served as a more public, dramatic elegy for Franklin some three years previous.
Posted by Russell Potter at 10:16 AM 1 comment:

Dr. Kane and the Bear on an American Banknote

Having enjoyed the sometimes fanciful game of imagining how Arctic explorers might look on banknotes, it occurred to me that perhaps, in the past -- especially in an era when private banks often issued their own notes -- it might have been possible that Dr. Elisha Kent Kane appeared on a banknote back in the mid-nineteenth century. I was amazed to discover that indeed this had happened, and more than once; first in 1856. with a vignette of "Dr. Kane and Party in the Arctic Regions" (of which I have not yet found an online image), and secondly in 1860, when this fanciful depiction of Kane and his men fending off an attacking bear from a boat graced a $3 note issued by the Continental Bank of Boston. The scene was engraved by DeWitt Clinton Hay after a design by Felix O.C. Darley, and is regarded even today as #24 of the top 100 nineteenth-century notes ever issued. It's a striking scene; Kane himself seems almost to be snarling back at the bear, hatchet in hand, while one of his comrades prepares to launch his spear.

Of course no such scene ever occurred, nor was Dr. Kane ever in the sort of small rowboat depicted in this engraving -- but nevertheless, after the fashion of previous heroes (one thinks of the dozens of engravings of of a  young Horatio Nelson's encounter with one), such an image seemed an ideal way to lionize (or perhaps one should say, bear-ize) a Polar hero.
Posted by Russell Potter at 2:28 PM No comments: 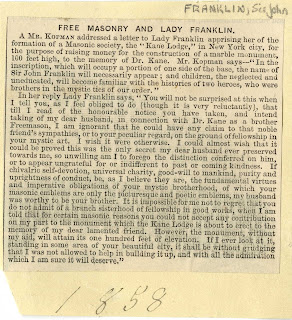 In researching the history of Sir John Franklin's last expedition and its aftermath, there have from time to time been a number of surprises. In quite a few of these cases, it's been because a fresh look at what we already "know" about Franklin has shown that we were, in fact, wrong: wrong about which railway engines were likely installed in his ships, wrong about which archive held which of the Daguerreotypes made of him and his officers; wrong about the extent and significance of lead poisoning among Franklin's men. To this list may now be added another discovery: the statement that Franklin was a Freemason -- often repeated in the literature of the 1850's, particularly in the United States -- can now be shown to be wrong, and on the best possible authority: Lady Jane Franklin herself.

Some background on this question: next week, I'll be giving a talk at the fabled Kane Lodge, so named in honor of Dr. Elisha Kent Kane, the noted American Arctic explorer who served on one and commanded another of the "Grinnell" expeditions in search of Franklin and his men. Kane was a Freemason, and the outpouring of grief that attended his death in 1857 was  -- though nationwide -- particularly felt among Freemasons. A memorial volume was published by the Grand Lodge of the the state of New York, filled with encomiums as to Kane's virtues, and frequently mentioning that he had gone in search of a brother Mason, Franklin himself. Curious about this, I wrote to the Library and Museum of Freemasonry in London, asking whether they could confirm Franklin's membership in a Masonic lodge. They wrote back that they could find no record of his being a Mason, but did have one clipping, dated only with the year 1858, in which Lady Franklin herself, in response to a letter from the officers of the Kane Lodge, regretfully corrected their assumption:


Till I read of your honourable notice you have taken, and intend taking, of my dear husband, in connection with Dr. Kane as a brother Freemason, I am ignorant that he could have any claim to that noble friend's sympathies, or to your particular regard, on the ground of fellowship in your mystic art. I could almost wish that it could be proved this was the only secret my dear husband ever preserved towards me, so unwilling am I to forego the distinction conferred on him, or to appear ungrateful for, or indifferent to, past or coming kindness.

The news may have arrived too late to correct this assumption in tributes already printed, or perhaps it was simply overlooked by the public press, which continued to refer to Franklin as a Mason in the years following. Certainly, it does not in any way diminish -- nor would Lady Franklin wish it to -- the sincere spirit of Kane, whom she considered a dear friend, or his brother Masons, in wishing to draw attention to the bond that, in so many other ways, connected these two men.

And indeed there is a connection; while we can't attribute it to Franklin, a purple glass Masonic seal was among the relics recovered by McClintock from the boat in Erebus Bay, and is preserved to this day at the National Maritime Museum. From it, we may be fairly certain that one of Franklin's officers or men was in fact a Mason, and that in his quest to find them and bring them succor, Kane was acting with a particular benevolence toward at least one of his Brothers.

I am grateful to Mr Peter Aitkenhead, Assistant Librarian at the Library and Museum of Freemasonry, for his assistance and generosity in forwarding this clipping.
Posted by Russell Potter at 9:05 AM 5 comments: