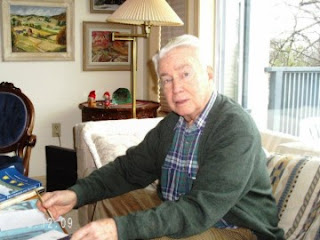 It may well have been the most ambitious single Franklin search of all time, and -- although its results were modest -- we now know it came agonizingly close to discovering the wreck of HMS "Erebus." It was officially known as "Project Franklin," and much of what we know of it today is thanks to the accounts written by William C. Wonders, a leading geographer of his day and project participant. What follows is largely based on his article, "Search for Franklin," which appeared in the Canadian Geographical Journal (now Canadian Geographic) in 1968.

The search had its origins in the Franklin fascination of yet another passionate amateur, Mr. W.G. McKenzie. McKenzie, an insurance agent then working in London, Ontario, he had a particular conviction that Franklin's grave, which he believed must have been a substantial one, ought to be able to be relocated, given sufficient manpower. McKenzie write to the Minister of National Defence (Paul Hellyer, who is still living as of this writing), with what turned out to be a very convincing proposal. The original plan called for just eight searchers, drawn perhaps from the Naval Training Division, but it grew in the planning to be a substantial land, sea, and air exercise. Part of this was due to 1967 being Canada's centennial year, but the friendly rivalry between various departments and branches of service also played a role, Ironically, as Wonders noted, "what was originally conceived as a naval expedition became essentially a Canadian Army operation, with support from the R.C.A.F., but without one member of the Navy being directly involved."

The search was planned to focus on the former site of the North Magnetic Pole (on the theory that Franklin's grave might be nearby), the vicinity of Cape Felix (for the same reason), and eastern Victoria Island, on the thought that men from Franklin's ships might have reached there. In the later stages of planning, a five-man diving team was added, to be deployed in the vicinity of O'Reilly Island. Two  CH-113A Voyageur helicopters were assigned for transport and support, and a base camp near the DEW-line station at Gladman Point was established early on August 5, 1967. A total of fifty-two men would ultimately participate in the search.

Weather, as it always will in the north, delayed the deployment of some of the teams, and conditions on the ground limited some of their searches, but by the project's conclusion twenty days later, nearly all the target areas had been visited. The team at Cape Felix re-discovered notes left by Henry Larsen in 1949, along with a boot-heel and some Inuit artifacts; searches at Terror Bay, the Clarence Islands, the west coast of the Boothia Peninsula, Taylor Island, the RGS Islands, and the Adelaide Peninsula found no Franklin materials, though numerous Inuit tent-rings and artifacts were observed. It was, for the land searches, a disappointing result.

The land search of the northern tip of O'Reilly Island, however, came up with a number of promising items -- copper sheeting, spice tins, a block and belaying pin, and an oar -- which testified to the possible presence of a wreck nearby. The divers, in Wonders's account, "discovered nothing" -- but as sometimes happens, that wasn't quite true. On a ridge on the island, one of the divers came upon a substantial piece of wood, which -- with the names of his mates carved into it -- he turned into an ashtray and retained as a souvenir! It was, without doubt, a piece of HMS Erebus, as the diver, Bob Shaw, later realized.

William C. Wonders was one of Canada's most eminent geographers in his day; he served a term as President of the Canadian Association of Geographers, and received both the Order of Canada and the Queen's Jubilee Medal. Sadly, he did not live to hear news of the discovery of Erebus; Dr. Wonders passed away on January 24th, 2011. You can read the full text of his article at the Canadian Geographic website.
Posted by Russell Potter at 1:51 PM 3 comments: 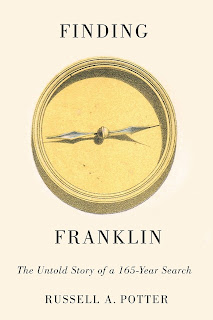 Many readers have noticed my hiatus here at Visions of the North, with only one new post since October of last year. The reason for this, though, is a happy one: I've been at work on the final touches of my new book Finding Franklin: The Untold Story of a 165-Year Search, which will be coming out September 1st from McGill-Queen's University Press.

Finding Franklin brings together much of my research on the Franklin mystery from the past twenty years, but there's also a great deal of brand-new material. I spent much of 2015 digging into the history of the Franklin search in the modern era, from Lachlan Taylor Burwash and "Paddy" Gibson in the 1920's and '30's to Barry Ranford and David Woodman in the 1990's and 2000's. I conducted more than a dozen new interviews with archaeologists, journalists, and amateur Franklin searchers, working to create a more complete and detailed picture of what we know, what each search has added to our knowledge, and what remains unknown, or unknowable. In the process, I found that searches for Franklin had been far more numerous and ambitious than I'd previously realized, and that much of what was once found has since been forgotten, with artifacts and human remains shelved away in obscure collections, or simply lost. In fact, between Burwash's first searches in the 1920's and the last of the private searches before Parks Canada became involved in 2008, there were more than fifty Franklin searches.

Finding Franklin sets the stage for these searches by recounting the essential details of the Franklin mystery, and the questions raised by early searchers such as Rae, Hall, and Schwatka. A focus throughout is the Inuit testimony, widely credited for helping to find HMS "Erebus" in 2014, but seldom discussed, or understood in detail. The book also showcases the new ways in which old evidence is being freshly examined, from the question of lead poisoning to that of identifying specific human remains. And, along the way, I offer my own reflections on the meaning of such a search, and reminiscences of my encounters with my fellow-searchers, whether on the glistening  ice of Resolute Bay or in a dim-lit booth in a pub in County Kildare. My book will, I hope, interest and engage both those who've long been curious about the Franklin mystery but have been unsure where to start, as well as those who, like myself, have long ago been bitten by the bug that leads to 'Franklinitis' -- a so-far incurable condition that spurs its sufferers to undertake their own personal pilgrimages to the books, the places, and the artifacts in which the Franklin story resides.

As the book's publication draws nearer, I'll share some of the fruits of my recent work, including a revival of my "Franklin searcher of the month" feature, this time highlighting those whose contributions, though significant, have been largely forgotten. I hope that all who have followed my earlier posting here will continue to do so, and can promise fresh news, and new approaches, to this storied mystery.
Posted by Russell Potter at 2:30 AM 17 comments: