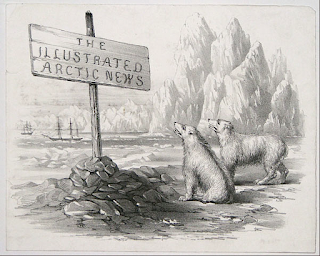 The subject of shipboard newspapers in the Arctic is a large one, dating back to William Edward Parry's sojourn at Winter Harbor on Melville Island in 1819-1820, and extending through the Franklin search era of the 1850's and beyond. The earlier newspapers are distinguished in that they were circulated in manuscript, since no one had thought to bring along a printing press, but in every other way they were conducted as were their print cousins. The North Georgia Gazette and Winter Chronicle, founded and edited by Edward Sabine on Parry's voyage, proposed as much in its first announcement:


It has been suggested that the establishment of a Weekly Newspaper may assist in enlivening the tedious and inactive months of winter, It is in contemplation therefore, to try the experiment, by circulating the first Number of the "WINTER CHRONICLE" amongst the officers of the Expedition, on Monday the 1st of November.

Sabine's efforts succeeded far beyond the original designs; the newspaper ran to twenty-one numbers, ending in March of 1820, and was crammed with all sorts of matter: News (such as it was), poems, songs, announcement for plays at the Theatre Royal, North Georgia, numerous letters to the Editor, most signed with clever pseudonyms ("Philosophicus," "Peter Trial," "Scepticus," and "Trim") and engaging in lively debate with the paper, and each other.  The results -- lightly censored, as one would expect -- had the distinction of being printed soon after Parry's official narrative, both in England and in its first American edition, printed in Philadelphia by Abraham Small, where it was bound in as a supplement to Parry's narrative. This book graces my shelves, and the paper appears thusly in its pages. It can also be perused via Google Books, and recently there was a lovely stand-alone edition published by the Green Lantern Press.

Most other early "newspapers," like the North Georgia Gazette, were not printed until after the expedition's return.  Some, though, were clearly made in anticipation of such a possibility, and among these the Illustrated Arctic News, conducted aboard HMS "Resolute,"  has pride of place. Modeled upon the Illustrated London News, with which all the (literate) crew members were to some degree familiar, it included illustrations, ornaments, and illuminated capitals of all kinds. Happily, through the good offices of the Internet Archive, you can peruse the printed facsimile, though alas not in color, a feature even the "real" illustrated papers in London did not yet possess.

Some later newspapers were, in part or whole, actually printed on board ship; Elaine Hoag of the National Library of Canada has published the most extensive research on these, both in her essay "Caxtons of the North" and in her earlier "Shipboard printing on the Franklin search expeditions," and these, along with other printed materials, will be the subject of my next post.
Posted by Russell Potter at 6:24 AM 3 comments: 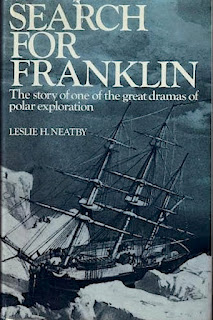 With the great interest in my earlier post about the best books with which to launch one's armchair expedition in search of Franklin, I was delighted to receive, from David C. Woodman, his personal recommendations for the top seven books on the subject, and the ideal order to read them in.  Here is his list.

1. Search for Franklin - Neatby, L.H. : A lucid and readable introduction to the subject for the "newbie" just starting out that is good for context. If you are already familiar with the subject to the extent that you know who Fitzjames is you may safely skip this and go to:

2. Sir John Franklin's Last Arctic Expedition - Cyriax, R.J. : A timeless classic, a little dated and conventional as Cyriax hated speculation. Published in 1939 so doesn't have the most recent findings, but still excellent.

3 . Barrow's Boys - Fergus Fleming : A great book to put the whole Victorian craze with exploration, and the Franklin Expedition, in a wider perspective. Fleming also brings the whole arctic enterprise alive with colourful descriptions of the actors. An easy read full of gems - after reading this you will have a deeper understanding of the men whose exploits are often recorded so matter-of-factly -  you will never think of Lyon again without thinking of his tattoos!

4. The Voyage of the "Fox" in the Arctic Seas - McClintock, Francis Leopold : Can't beat the original search documents, reads a little slowly in spots until the relics are found but an essential source.

5. Schwatka's Search: Sledging in the Arctic in Quest of Franklin Records - Gilder, William H. : As valuable as McClintock, you can't really understand the evidence without reading it. A little flowery in tone (written by a journalist vs a Naval Officer),  best read in this order for chronological reasons.

6. Deadly Winter: the life of Sir John Franklin - Martyn Beardsley : A very good biography of Sir John that sees him as a full person rather than a caricature. I tend to agree with Beardsley's conclusion but he is very fair in giving space to the alternative readings of Sir John's career and life.

7. North With Franklin: The Lost Journals of James Fitzjames - John Wilson  : It is of course best to read Fitzjames' Journal in the original, but as that is difficult Wilson's fictional treatment is a good alternative and nice way to try to get the "feel" of what transpired.
Posted by Russell Potter at 7:57 AM 1 comment:

Some other stats on the site: our viewership is broad and international: there were 13,873 views from Canada, 12,007 from the UK, 6,911 from Australia, 6,148 from Germany, 1,128 from France and 763 from Spain. Mac users make up a healthy 20% of all views, but there are also nearly a thousand Linux users and 526 who somehow managed to view the site on their BlackBerry. And what were the most popular posts?  #1 was on Sir Edwin Landseer's painting, "Man Proposes, God Disposes"; #2 was "Who Discovered the Northwest Passage"; #3 was on the Peglar Papers, and #4 was my friend Joe O'Farrell's fascinating post on the possibility that the Erebus and Terror were frozen into an iceberg, and indeed seen by eyewitnesses before drifting off to sea.

For all who have joined me on this voyage, I'm deeply grateful -- and I hope I'll be able to keep the quality and interest of the blog as high over the next three years as it was over the last three.
Posted by Russell Potter at 6:00 PM 3 comments:

Maps of Disaster: The Arctic Surveys of Dease and Simpson

Along with the latest technology, the Franklin expedition took the latest maps, specially engraved for the Lords of the Admiralty by the firm of John Arrowsmith. "Arrowsmith's Charts" were the maps of the British Empire upon which the sun never set (especially in summer and north of 60 degrees latitude!). Unfortunately, the latest surveys of the area Franklin would be exploring contained grave errors which would help seal his fate. The first error was that of James Ross who, in his trip to what he called "King William Land" on the Ross Expedition of 1829-33, traversed land and water indifferently, more frequently mistaking iced-over water for land. As a result, the only viable "Northwest Passage," which lay to the east of King William, was falsely regarded as a dead-end bay, was shown on the maps as "Poctes Bay." Ross thus led credence to the false idea that King William was an extension of Boothia, whereas in fact it was a separate island. Both James and his uncle Sir John Ross persisted in the equally false notion that the "Gulf of Boothia," named by them for their sponsor, Felix Booth (he of Booth's Gin fame), opened out into the waters at the mouth of the Great Fish River. Arrowsmith's map, shown above, shows the extent of both errors.

Dease and Simpson, who had mapped the southern coast of what was then still called the "Polar Ocean," added their own errors to the charts; their latitudes were accurate enough, but their longitudes seemed to drift with the tides; they misaligned the coast of King William Land with that of the mainland, and misstated the longitude of their farthest point, just beyond the "Castor and Pollux River" (Dease and Simpson gave the river's longitude as 68°28′ N., 94°14′ W. whereas in fact the longitude is 93° 53′, an error of roughly eight miles too far west (Dr. Rae, though he confirmed Dease & Simpson's latitude, got  a longitudinal reading of 93° 15′, which is an additional 16 miles off!). These errors could be due either to extreme refraction of the sun at the horizon, or to inaccurate chronometers -- but what was most misleading was Dease & Simpson's claim that the coast tended to the east as far as they could see (shown on the map as a dotted line), whereas in reality it soon turns almost straight north. There was no wide passage there, although had Franklin's men made it so far, they might have stumbled upon the Bellot Strait.

With these charts as their guide, it's little wonder that Franklin's men, on their death march along the southern coast of King William Island, failed to cross Simpson's Strait at its narrowest point; they may well have planned to continue by land as far as the coast of the Gulf of Boothia.  Perhaps they were making for Ross's old Victory harbor; perhaps they hoped to launch their boats into the Gulf of Boothia and make their way to northern sea-lanes as had Ross.  In any case, they never made it.