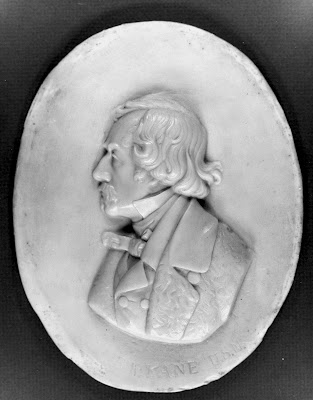 Dr. Elisha Kent Kane, the intrepid American Arctic explorer, enjoyed tremendous fame in his day; he was celebrated in moving panoramas, depicted in medallions, and his accounts of his expeditions were runaway best-sellers. This wax relief is one of the more unusual -- and seldom-seen -- portraits of Dr. Kane; preserved in the archives of the United States Naval Academy, it resembles and may have been based on the popular CDV image by Matthew Brady (although if so, it's reversed). It's possible that it was made for use in a medallion or plaque (it's just 8 3/4 by 6 3/4 inches in size).

On his death in 1857 in Havana, Cuba -- where he had gone in a futile attempt to recover his health -- his remains were returned by steam-ship, and his  funeral train journey was the longest in American history to date (exceeded only by Lincoln's in 1865). His body was returned to Philadelphia and given an elaborate processional funeral, and he was laid to rest in the family fault at Laurel Hill Cemetery.
Posted by Russell Potter at 10:01 AM No comments: