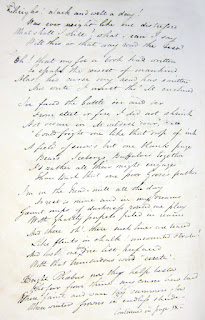 The career of Sir John Franklin inspired numerous poems both during and after his lifetime, ranging from the romantic (Swinburne's "The Death of Sir John Franklin") to the modernist (Gwendolyn MacEwen's "Terror and Erebus") to the postmodernist (David Solway's Franklin's Passage cycle) -- but until now, Franklin had never been known as the author of any poetry of note.  The excellent Non Solus blog just put up a scan of the manuscript of Franklin's foray into verse, which was preserved in the pages of a special presentation copy of his Journey to the Polar Sea, which was inscribed to Sir John Richardson's wife.  This copy had been acquired by the University of Illinois library under the auspices of Professor Robert Eugene Johnson, whose biography of Richardson was published in 1976, but although Johnson mentioned the poem in his book, it has not previously been published, so far as the blog's editors (or myself) can tell.

It was certainly not meant for public consumption, and its interest today is more historical than poetical -- although married to the poet Eleanor Ann Porden, Franklin was, to his very soul, a man of prose. The subject of the poem is the pressure Franklin felt on his being expected -- as had been tradition for explorers -- to write up his journey for public consumption, whence it would be brought forth by John Murray, whose arrangement for such things with the Admirality was a long-standing one.  Many biographers have noted the struggles Franklin went through in producing his narrative, and the prose indeed is labored in parts (though not half so much as this poem!).  Never the less, the result was widely read, and secured his reputation as "the Man who ate his boots"; the book has rarely been out of print since.

The poem itself is in a sort of ballad stanza, and is filled with archaisms, forced rhymes, and other such tokens of the light verse it aims at -- the first two stanzas are a fair sample:

Heigho! alack and well a day!
Was ever wight like me distressed
What shall I write? What can I say
Will this or that way read the best?

Oh! that my foe a book had written
So spake the wisest of mankind
Alas! his curse my head has smitten
And write I must tho ill enclined.


And it continues in this manner. One might be tempted to rehearse Harry Bailey's rejoinder to Chaucer's "Tale of Syr Thopas" -- but then again, Chaucer's doggerel was meant to be bad.  Still, the poem offers up some insight into Franklin the man; apparently he possessed a healthy dose of self-deprecating humor, a trait not often otherwise noted among his writings -- and for this, we can certainly be grateful.