Jane Franklin and the Westminster Memorial (2 of 2) 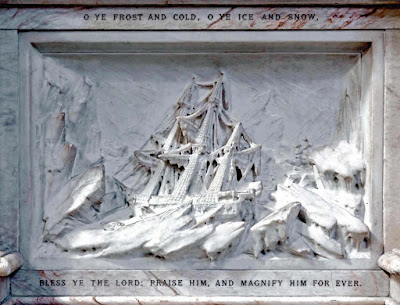 Getting the Monument right in Jane Franklin's eyes had clearly proved something of a headache for Sophy Cracroft, as her journal entry for 29th December 1874 showed:

"I went to Mr Noble and explained the placing of the flag at half-mast would be inconsistent to the circumstances intended to be set forth, namely the discovery of the NW Passage. My Uncle's death having, as we judged by the date, followed the return of Graham Gore's party, which had undoubtedly ascertained the fact of the continuous channel to the coast. He fully accepted and agreed to this and flags will be raised. I pointed out also that the condition of the atmosphere and the temperature as shown by the frozen sails and ropes forbid the possibility of either ensign or pennant being displayed or recognised to be such; they would be mere stiffened ropey masses. Everything proved to him that the fancy was irrational. He has difficulty of finding marble of the right kinds, as it must be uncommonly hard."

Somehow in the end the pennant was included & lowered, but no wonder Noble had looked "shadowy" to Catherine, the execution of this monument must have been highly stressful for him. He suffered ill health for years & died 23rd June 1876 aged 58 (Wikipedia)

The architectural design in alabaster surrounding Matthew Noble's white marble bust & bas-relief was by Sir George Gilbert Scott, RA and carried out by Messrs Farmer and Brindley (Daily Telegraph 2 August 1875) The Dean of Westminster had been responsible for choosing the inscriptions on the Monument. On the base of the bust was simply written: "FRANKLIN." Above & below the bas-relief of Erebus in the ice were verses from the Benedicite:

O ye frost & cold, O ye ice & snow,
Bless ye the Lord; Praise Him, and magnify Him for ever.

Below them the lines from Tennyson:

Not here: the White North has thy bones; And thou,
Heroic Sailor-Soul,
Art passing on thine happier Voyage now,
Toward no Earthly Pole.

The inscription to the right of the Bust read:

"To the memory of Sir John Franklin, born April 16, 1786, at Spilsby, Lincolnshire: died June 11, 1847, off Point Victory, in the Frozen Ocean, the beloved chief of the crews who perished with him in completing the discovery of the North-West Passage"

and to the left:

"This Monument was erected by Jane, his widow, who, after long waiting and sending many in search of him, herself departed to find him in the realms of Light July 18, 1875, aged 83 years"

After the ceremony Catherine wrote a letter (whereabouts unknown) to her friend Mrs Halliday with an account of the unveiling. Mrs Halliday wrote several pages of notes based on Catherine's letter, & these notes reveal something which isn't mentioned in Catherine's diary or Hardie's funeral letter:

It seems that as Jane Franklin lay in her coffin, before the lid was sealed, the immortal lines composed by Tennyson & written out by him, were placed into her hand to accompany her in death, along with a letter from Bishop Selwyn.

"The words of the Benedicite, chosen by the Dean, are so appropriate!

Tennysons too, are remarkable.

A copy of them, written by Himself, were put into her Hand in her Coffin, with the letter of Bishop Selwyn of Lichfield, from which the words of the Inscriptions, (recording her placing that Monument to her Husbands Memory) were taken."

Only death would have prevented Jane Franklin from attending the unveiling of this last Monument to her husband, but at least in death she carried the essence of that memorial in her hand, clutching those papers in her coffin as she descended via hydraulic machinery to the Catacombs of Kensal Green. 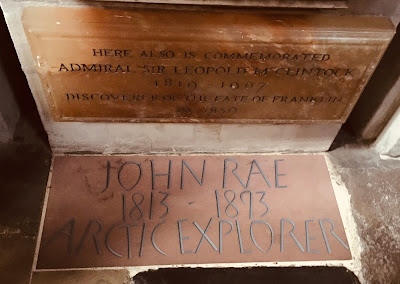 In 1908 a memorial to Admiral Sir Leopold McClintock was added beneath the monument to Sir John Franklin, of alabaster made by Farmer & Brindley:

"Here also is commemorated Admiral Sir Leopold McClintock 1819-1907, Discoverer of the Fate of Franklin in 1859"

A memorial stone to Dr John Rae was unveiled in September 2014, in red Orkney sandstone with Celtic style lettering by Charles Smith:

Posted by Russell Potter at 5:32 AM No comments: