Few have looked upon such extraordinary voyages as has she, and none of her contemporaries remain to tell their tale. Once proudly looking forth from the brig "Advance," she's been further north than any of her peers, and survived the wreck of her ship by more than a century and a half. The expedition's leader, Dr. Elisha Kent Kane, took something of a risk in bringing her back when they began their difficult retreat to the south -- but, as his men observed, she was made of wood -- "if we cannot carry her far, we can burn her." And carry her far they did, aboard the tiny boat they christened the "Hope," and she saw them find their way back to safety in Upernavik. Kane was celebrated as a hero, although the parades of welcome were followed in only a few months by his funeral. The Kane Lodge, a Masonic establishment that had sponsored Elisha's entry into that ancient fraternity, changed its name to honor him, and its members still meet regularly at their Manhattan location. And it's there, in a glass case in the corner, that the Fair Augusta turns her eyes upon you, and poses her Sphinx-like riddle: who is it that goes forth proudly, and returns humbly, minus a nose, yet survives to return home? 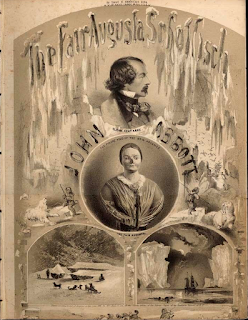 In her day, she was widely known and celebrated; she even had her own song, the "Fair Augusta Schottisch," with her portrait on its cover; in 1893 she was put on display at the World's Columbian Exposition in Chicago. In 1910, she was hailed thusly in a speech given at the Lodge:


The fair Augusta was the figurehead of Kane's ship, and with a devotion to the noble hero, worthy of all praise and exhibiting what the sex can do, who kept her position in ceaseless battles with the surging ice until she lost her nose, and no woman could be expected to head an expedition after her nose was gone ... Kane Lodge keeps her as its presiding angel; she knows all our secrets and has never given one away.

One other question is who was the model for her -- or was she, indeed, modeled after any one person? A leading candidate, of course, would be Dr. Kane's paramour Margaret Fox, one of the well-known "Fox Sisters" whose "spirit rappings" captivated a nation until they were revealed (by the sisters themselves) as a fraud.

By some accounts, Kane was aware of the deception, and tried to persuade Margaret to break away from her sisters. According to others, including Margaret herself, they were secretly married. Whatever marital bliss might have awaited was foreclosed in February of 1857, when Kane died of heart disease in Havana. Margaret and her sisters, after a disastrous "revelation" tour in which they exposed their methods, drifted in and out of spiritualist circles. Margaret stayed for a time in England with her sister Kate, who had married  a London barrister; at some point after his death Margaret returned to New York, where she died in March of 1893. Most of the notices were critical of her career, though a writer for the Rochester Democrat and Chronicle struck a more sombre and sympathetic tone: "She lived for several years on what [Kane] had left, but this soon gave out, and she was left to the care of her friends. Her mediumistic power decreased, and she lived a life of solitude and retirement, until death found her in absolute destitution."
Posted by Russell Potter at 8:45 AM No comments: