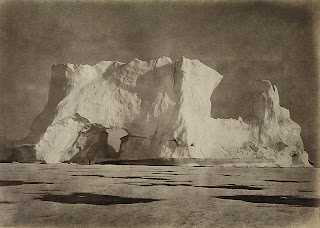 This Friday, April 26th, at the New Bedford Whaling Museum, a new exhibition of Arctic art and imagery unlike any other has its opening day. Entitled Arctic Visions: Away Then Floats the Ice-Island, it documents not only the views of Arctic scenes painted by William Bradford, but the magnificent photographs taken by the photographers George P. Critcherson and John Dunmore, who accompanied Bradford on his Arctic voyages, most importantly that aboard the "Panther" in 1869, from which the view shown above was taken. Working in challenging circumstances taking wet-plate photographs on glass and using a shipboard darkroom, these two photographers worked visual miracles. On their return, their negatives were used for a number of purposes: first, as part of a series of magic lantern lectures, narrated by Bradford and others, second, as the basis for many of Bradford's paintings and a viewbook for possible new commissions (Queen Victoria chose one that way), and finally as albumen prints, most notably used as illustrations for the magisterial, "imperial folio" volume The Arctic Regions, arguably the first, finest -- and rarest -- volumes about the Arctic ever to be illustrated with photographs.

This new exhibit offers many different ways to see all three of these uses of these pioneering photographs. An original copy of The Arctic Regions will be on display, along with touch-screen version that museum-goers can page through. Working with Boston fine-art publisher David R. Godine, the museum has republished this remarkable volume; although the format is smaller (relatively speaking!) most of the photographs are reproduced at larger than their original size. Copies of this book, for which I've written a new introduction, will be available at the Museum.

Nearby, one can view some of the original glass plate negatives, as well as albumen prints, along with several Bradford canvasses based on these same views, alongside his magisterial "Sealers Crushed by Icebergs." The lantern shows -- which eventually evolved into a series known as "The Bradford Recitals," have been be re-created with their original narration. And, to set these images in their context, there will be a rich array of polar artifacts, Inuit clothing and boat models, and even a desk -- the companion of that in the Oval Office -- made from the timbers of the Arctic search ship HMS "Resolute," and given by Queen Victoria to Henry Grinnell, sponsor of two key Arctic expeditions in the 1850's.

The concurrent exhibition "Following the Panther: Arctic Photographs of Rena Bass-Forman," showcases the work of contemporary artist Rena Bass-Forman who, inspired by Bradford's voyage, retraced Bradford's footsteps in the land of ice and stone, photographing many of these same sites as the now appear.

If you can, try to make it to the grand opening this Friday at 5 p.m. -- to mark the occasion, there will be an Arctic lantern lecture by the incomparable Terry Borton of the American Magic Lantern Theater -- and of course there will be the exhibit itself, one not to be missed!
Posted by Russell Potter at 9:00 AM No comments: