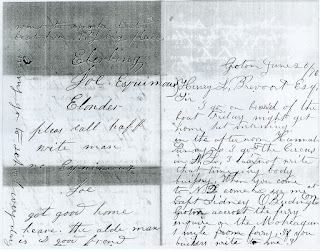 As historian Kenn Harper has noted on many occasions, the strong bonds of friendship that tied Charles Francis Hall’s Inuit guides and translators, Ipirvik (“Joe,” whose Inuit name Hall rendered as "Ebierbing") and Tookoolito (“Hannah”) together were extraordinary. As Joe himself put it, several years after Hall’s death, "never be such a good man as Hall again - never so good to me."

And yet, as with any friendship, there were a few rough patches. One of the rougher of these was doubtless the time when, though King William Island lay in reach, Joe and other Inuit refused to take Hall there, as they were worried about persistent accounts of a hostile Inuit band, the "See-neem-e-utes," whose territory lay between them and their goal. Up until recently, we’ve had only Hall’s account of the affair, but a few years ago in the Hall papers at the Smithsonian, I stumbled upon a document that turned out to be a letter — the only one known — written (or rather dictated) by Joe to Henry L. Brevoort, the son of one of Hall’s key supporters. It’s a fascinating document, and touches on many subjects, including Joe and Hannah’s daughter (“Punny go to school every day”), daily life in the home established for them by Sidney O. Budington (“the old man is good friend”), and Joe’s request for some New York cigars, which he declares are the best. 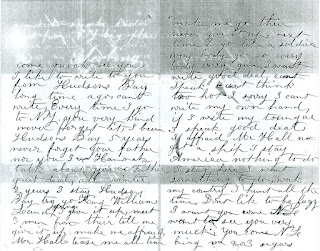 But in the midst of this, Joe recounts, from his own perspective, what happened when Hall's party was forced to turn around, knowing that a return to King William Island would have to be delayed by about nine months:


2 years I stay Houdsons Bay try go King William Land then I give it up, meet 3 men from their tell me give it up make me afraid. Mr. Hall tease me all time make me go their never give it up. Next time I go like a soldier every body go so every body carry gun.

It's easy to imagine Hall, whose bursts of anger when the Inuit on whom he relied were reluctant to follow his dictates were well-known, being furious at this delay. It seems, though, that whatever rift this may have caused must have eventually healed.

Joe's letter closes with a poignant and somewhat puzzling series of phrases: "Ebierbing. Joe. Esquimaux. Elonder. Pleas call haff wite man no Esquimaux Joe." Clearly, he did not like the sobriquet "Eskimo Joe," a name that has persisted in popular culture (and as the name of a popular restaurant in Oklahoma), but "Elonder" is a puzzle. His request to "pleas call haff wite man" may similarly reflect a desire to not to be seen as some cultural outsider, rather than as any actual comment on his ancestry.
Posted by Russell Potter at 7:13 AM No comments:

The man with the long teeth

The question of whether there may or may not be human remains aboard either HMS "Erebus" or "Terror" is haunted by the long shadow of a story that was passed through Inuit oral tradition for many decades: the story of the man with the "long teeth" whose body was found on board the ship at Utjulik. A version of this story, with many of the same essential points, was told to Franklin searchers from McClintock in 1859 onwards. At one point, Franklin theorist Noel Wright theorized that perhaps HMS Investigator had drifted south, and that its figurehead, said to resemble a walrus, might have been mistaken for a man with long teeth by the Inuit! This of course, ignores two vital details: 1) The Inuit knew quite well how to tell a carved walrus from a dead man; and 2) figureheads don't "smell very bad," another key part of the story. And of course, we now know what he didn't: that HMS Investigator never moved from her final resting place in Mercy Bay.

But let's look at this story, with all its variants, across time. The version told to McClintock was second-hand, and provided by a young man whom they interviwed alongside old Oo-na-lee, a Netsilik elder then camped near Cape Victoria: "The [young man] also told us that the body of a man was found on board the ship [at "Oot-loo-lik]; that he must have been a very large man, and had long teeth; this is all he recollected having been told, for he was quite a child at the time."

As David C. Wooman has noted, Hall was repeatedly told of the “very large man” whose teeth “were long as an Innuit finger & of very great stature.” In-nook-poo-zhee-jook's account had several key details:


"The party on getting aboard tried to find out if any one was there, and not seeing or hearing any one, began ransacking the ship. To get into the igloo (cabin), they knocked a hole through because it was locked. They found there a dead man, whose body was very large and heavy, his teeth very long. It took five men to lift this giant kob-lu-na. He was left where they found him."

As with the boy who spoke with McClintock, In-nook's story was a second-hand one; he was retelling what he had been told. In Hall's notebooks at the Smithsonian, another account adds this detail: the man's teeth "were long as an Innuit finger" and he was "of very great stature" (Hall field notes, book 22). Another witness in this same notebook, Seeuteetuar's wife, Koo-nik, offered the most detailed account of all:


"She says that Nuk-kee-the-uk & other Ook-joo-lik Innuits were out sealing when they saw a large ship - all very much afraid but Nuk-keeche-uk who went to the vessel while the others went to their Ig-loo. Nuk-kee-che-uk looked all around and saw nobody & finally Lik-lee-poonik-kee-look-oo-loo (stole a very little or few things) & then made for the Ig-loos. Then all the Innuits went to the ship & stole a good deal - broke into a place that was fastened up & there found a very large white man who was dead, very tall man. There was flesh about this dead man, that is, his remains quite perfect - it took 5 men to lift him. The place smelt very bad. His clothes all on. Found dead on the floor - not in a sleeping place or berth."

Finally, when during Schawatka's search a decade later, Puh-too-raq told of the ship he had personally visited, aboard which there was a "dead body in a bunk inside the ship in a back part." Both Gilder and Klutschak confirm that his story included mentioning "a dead man in a bunk," though none of their, or Schwatka's accounts include the detail of the teeth. Rasmussen heard from the grandchildren of some of these same witnesses, and they too spoke of bodies -- this time in the plural -- "lying in their beds" (presumably bunks or hammocks).

The best explanation for this tradition of stories is that there was at least one body on board the ship at Utjulik. The points of general agreement are that it was in the "back part" (stern) of the ship, in a room that may have been fastened (locked) or nailed shut, and that it was a large, heavy, tall man. That he would have seemed tall to the Inuit who, historically, were a foot or more shorter in statue that the average European at the time, is not surprising; that he was "heavy" and that his remains were "quite perfect" suggests that he died aboard, quite possibly where he was found. The "long teeth" are doubtless due to the desciccation of the lips and gums, which has in known cases made the teeth appear much longer than they would in life -- see for example John Hartnell (right).

I would be willing to bet that these remains, which sank with the ship in question before the next summer, are still on the site. The ship must be HMS "Erebus," so if the body was in fact in the stern, it might well have been in the captain's or "great" cabin. By the same token, since portions of that area of the ship have been torn away and lie below the vessel, the most likely place for these remains might be in the débris field at the stern.
Posted by Russell Potter at 2:37 PM 4 comments: