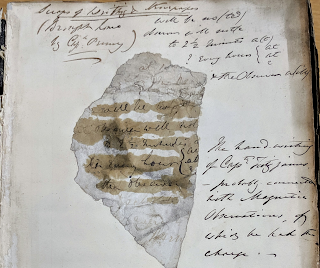 It was a ridiculous dream. “I’m going to the National Archives in London to look for some papers that have been missing for 168 years,” I told friends. “I’ll go through a pile of musty old ledgers line by line and, just when I’m starting to lose hope, I’ll turn over a page and that’s when I’ll see them.”

Of course, nobody believed that this would happen, least of all me. And we were all correct: I didn’t find the specific missing papers I had been looking for. But I found something else.

I’d never visited the National Archives before. But in July 2019, W. Gillies Ross published Hunters on the Track, and I realised that not all of the 1850-51 search expedition journals had been returned to their authors following the conclusion of the Arctic Committee investigation. I weighed up the probability that these papers still lurked in a ledger somewhere in Kew, ordered every record relating to those specific search years, and started to go through them page by page. This is how I spend all my holidays: sitting in silence and reverence with the history that I love.

A few hours into my first day, I turned a page in an unpromising-looking collection of letters and press cuttings and saw two beautiful pieces of paper that I had read about but had never seen before: a colourfully-treated scrap with Captain James Fitzjames’ writing on it, and a far smaller piece marked “Mr M’Donald” in pencil. I took a photo, and sent it to my Franklin research partner Logan Zachary, who was travelling with me via web chat. I told him: “I’m having an emotion”. I turned another page, and then another, and then I started to have ALL the emotions. 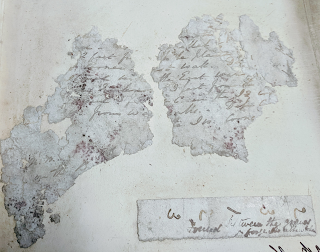 I couldn’t believe what I was seeing. So many pieces of paper, all clearly identified as having been picked up on Beechey Island by Captains William Penny, Erasmus Ommanney, Horatio Austin and other members of the search teams in August 1850. I kept turning pages. Each one contained a Beechey scrap. A second page in Fitzjames’ hand: was that from a journal? A ragged wrapper from a chocolate bar. A long strip, opalescent with age, and yet the words ‘To be called’ are still visible. A few lines of faded calculations elsewhere. A torn piece of brown wrapping paper with large, incomplete lettering. Small fragments of newspaper; a larger fragment of newspaper, substantial enough for me to very gently open by hand. I was touching a newspaper that had travelled to Beechey Island on HMS Erebus or HMS Terror and had probably been read by the entire ships’ companies several times over. The room started to sway around me.

I sent all the photos to my research partner and went outside to sit by the pond and try to clear my head. A swan stared at me, balefully. I smiled at it, foolishly. 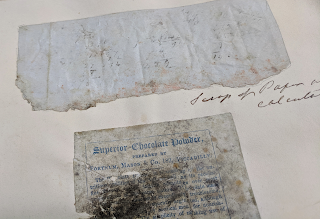 Over the next 48 hours, we ransacked the Remembering the Franklin Expedition group’s rich archive of posts for any reference to papers found on Beechey. Books were consulted. The  internet was turned upside down and given a good shake. We brought in Allison Lane and John Wilson, RtFE’s experts on Harry Goodsir and James Fitzjames respectively.

I was hoping that someone – anyone – would say: “Oh, those old things. Obvious hoax. John Bertie Cator got into the rum ration and decided to play a joke on Captain Austin.” But nobody did. And then I got in touch with Russell Potter. Russell was in the Arctic, because of course he was. This caused some initial communication problems:


[Scene: domestic, somewhere on the west coast of Scotland]

My mother: “Why isn’t that man replying to your email? Doesn’t he know how important this is?”

Me: “Mum, he’s on an icebreaker in the Canadian Arctic.”

Somewhere along the path, the 1850 discovery and recovery of the Fitzjames/Mr M’Donald/To Be Called fragments may have slipped below the collective radar of Franklin researchers. I can only speak for myself when I say that, yes, I was aware that some scraps had once been found on Beechey Island, but I thought that they must have been lost long ago or had fallen into private hands – which can sometimes feel like the same thing.

But now here we all are most unexpectedly, with a little more knowledge than we had three weeks ago, and with a lot more Franklin relics.

At this stage, it’s impossible to know the stories they can tell us, and the full significance of the papers may take years to unpack, analyse, and set in context. But this find, following on from RtFE members’ identification of the Beechey Anvil Block last year, gives continued hope that more traces of the Franklin Expedition are still out there somewhere, waiting to be rediscovered.

And those specific missing papers I was looking for in Kew? Well, they’re still missing. But I will find them: I just need to keep searching.
Posted by Russell Potter at 6:06 AM