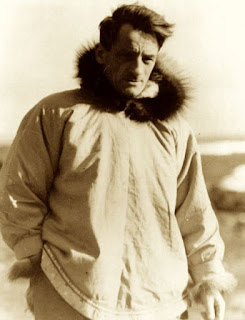 Few men in northern service were as rugged and hardy as Lorenz Alexander Learmonth. Like Dr John Rae before him, he was an Orkneyman, and prided himself on being able to get wherever he needed to go on his own resources, often arriving before, and remaining after, anyone else. And, throughout his time in the Arctic, he took every chance he could to follow up on his longstanding fascination with the fate of the Franklin expedition.

Like many young HBC recruits from Scotland, Learmonth first served as a clerk at the tender age of nineteen. Called away for military service in WWI, he returned in 1919 to become the Post Manager at Port Harrison (now Inukjuak), the first of many assignments. Notably, he was one of the men called upon in 1937 to set up a new post at Fort Ross at the entrance to Bellot Strait. Most of the men and materiel for the site arrived aboard the venerable HBC steamer Nascopie and the sloop Aklavik. but Learmonth insisted on traveling to his new assignment on his own, making his way from his post at Gjoa Haven aboard an old whaleboat towing a canoe. Bad ice conditions delayed him several times; he eventually abandoned the whaleboat and finally made it though by portaging the canoe for twenty miles over part of the Boothia Peninsula. His long journey was only the first of his troubles; just as the ships were leaving, Learmonth was climbing from the rigging of the Aklavik to the Nascopie when he fell to the deck below, suffering injuries that were hard to assess, given the absence of doctors or x-ray equipment (it turned out later that he had broken three ribs). The captain of the Nascopie wanted him the come back south for medical treatment, but Learmonth would hear nothing of it, insisting on staying. To assist him with his recovery, and in running the post, a young carpenter named Don Goodyear -- a man who had loudly declared that he "hated" the Arctic -- was left with him; one wonders as much as how Learmonth survived such forced company as that he managed to recover from his fall.

Back when the ships had been anchored nearby, and before his arrival from Gjoa Haven, Dick Finnie (subject of a previous "searcher of the month" posting) and an RCMP man attached to the group had uncovered an old cairn containing a sodden and illegible note inside a stoneware jam jar, very likely the one McClintock had described leaving near the site (which he called "Depot Bay") in 1859. Learmonth took a keen interest in the find, as he'd already developed a strong Franklin fascination; the spring before, he'd organized a sledge-trip from Gjoa Haven to the purported site of Schawtka's "Starvation Cove." At a site twelve miles west of that place, said to be known in Inuktitut as "Tikeraniyou," Learmonth and his comrade D.G. Sturrock had uncovered the skeletal remains of at least three men, along with a George IV half-crown and a sailor's large ivory button. A few years later, in 1942, Learmonth found another skeleton near Washington Bay on King William Island, along with two skulls on the beach near Tulloch Point. Several times over his career, Learmonth searched other sites, including the location of Ross's Magnetic Pole, recording his finds in his journals and diaries.

Learmonth finally retired in 1957. Aside from a 1948 article on the Franklin relics he'd found, which appeared in the first volume of Arctic, he published no account of his searches, although typescripts exist of at least one longer account. Fort Ross, which had always been difficult to supply due to unpredictable ice conditions, was abandoned by the HBC that same year, its final post manager and his wife evacuated by an emergency airlift (the Nascopie having foundered and been destroyed in a storm the year previous). Learmonth's Inuktitut name was Eetungalik, 'the one with eyes wide open,' which could have been a comment on his appearance, or might suggest that the Inuit had a high level of regard for his perceptive powers. In either case, he was certainly among the more sharp-eyed and persistent of those who searched for remains of Franklin in the 1930's and '40's.
Posted by Russell Potter at 8:34 AM 5 comments: