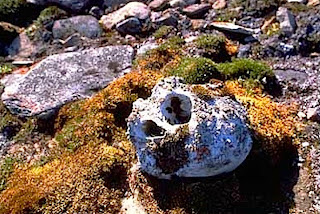 When I went up to Nunavut to participate in the ITN/NOVA program "Arctic Passage," the only other specialist the producers brought was a physician who was an expert in scurvy. And this of course made perfect sense -- after all, wasn't scurvy one of the unholy trinity (the others being lead-poisoning and cannibalism) that everyone assumed played at least some role in the demise of Franklin's men?

Well, now comes a team of osteoarchaeologists with a paper that takes a skeptical look at this assumption. The bones examined included the Greenwich skeleton (previously thought to be that of Le Vesconte) along with small numbers of bones found at Erebus Bay and Booth Point by Owen Beattie. The largest set of bones studied in modern times, those brought back from Ng-Lj-2 by Anne Keenleyside, have since been re-interred and were thus not available for direct study; here, they just examined images and data from the previous study.

I'm no specialist, but the basic gist of what they were looking for is fairly straightforward: The presence  of damage or lesions on the bone suggestive either of haemorrhage or of bone that healed imperfectly or not at all after injury. Since scurvy inhibits bone growth and repair, either one would be evidence of its presence, while the absence of such damage, or the presence of bone that had properly healed, would be evidence of the absence of the disease.

Their overall conclusion? They found  "little evidence of bony lesions consistent with evidence of the disease" and therefore suggest that "factors other than scurvy may have been the main causes of morbidity and mortality." And yet, although I have learned from friends such as William Battersby that there's a great deal to be learned by questioning the received wisdom and assumptions of past histories, I believe that this particular paper is significantly flawed, and casts very little reliable light on the question it sets out to answer.

The problems are twofold: 1) The authors rely on a variety of very uneven secondary sources as to problems with scurvy on other Arctic voyages, cherry-picking even from among these, and thus paint a deceptively optimistic picture of the success of the usual Naval regime of lemon juice; and 2) The authors do not account for the extremely small size of their sample, nor for the very limited range of sites from which the bones were recovered.

As to the first, they completely mangle the Arctic experience of Sir John Ross, mistakenly claiming that he spent four winters in the Arctic on his 1818 voyage, and treating his 1829 voyage as though it were a second one of equal duration. They are also do not mention, or are unaware, that Ross on his multi-year sojourn of 1829 received large quantities fish and fresh meat for two of those winters from his Netsilingmiut neighbors, which is almost certainly the reason for the low incidence of scurvy. They also do not look closely at multi-year expeditions, mentioning McClure and mentioning as if in passing the deaths of three of his men; casualties from other Franklin search expeditions are not mentioned at all.

Secondly, as to the sample size: they looked only at 409 bones in all. There were 129 men on the Franklin expedition, with 206 bones each -- thus 26,574 bones among them. -- so 409 bones is only 1.5% of the total. Only 105 of these bones were physically examined, less that four-tenths of one percent. All of these also come from a couple of sites on the southern coast of King William Island.

The final flaw, it seems to me, is that the writers acknowledge that it is possible that an individual could indeed be suffering from scurvy's ravages, but not show evidence of it in his bones. This makes it really impossible to extrapolate from this tiny sample anything about the prevalence of scurvy among Franklin's men. The matter surely could be further studied, but I believe that the preponderance of evidence from actual Arctic voyages of this period is that, at least in all expeditions lasting more than one winter -- with the exception of those where fresh meat was available in large quantities (Ross 1829) -- scurvy was a widespread and persisent cause of debility and death.
Posted by Russell Potter at 1:16 PM 2 comments: