Railway Engines at the Bottom of the Sea 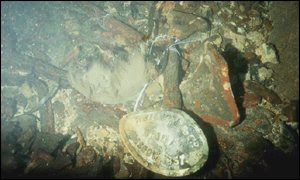 Following up on an earlier post, since the area chosen for this year's summer search is where the first, crushed ship of Franklin's may lie, the question of how to locate and identify a submerged railway engine takes on new significance. As noted in my earlier post, railway expert Dr. Michael Bailey took the lead in the historical work for this expedition; I've since located a few resources on the 'net that add something to his account. I wish that the National Railway Museum would put something more detailed online! Nevertheless, their exhibition page, along with this article from the BBC News, give some sense of the immense logistical challenges. Happily, the channel where Franklin's vessel may be found is free from the very high currents that made this project so difficult.
The vessel, the "Thomas," a 700-ton barque, had sailed in 1857, just a dozen years after Franklin, headed for Nova Scotia. She didn't make it far, foundering in the Hebrides and taking her cargo of railway engines to the bottom of the channel. But what type of engines were they? Initial research seemed to indicate that they were small service engines. Yet the engines found were not the engines expected, which gave a lesson in the ability of above-ground archaelogical work solving an underwater mystery. As Bailey recalled,

"Initial research indicated that the Thomas had been carrying two small saddle tank engines packed in kit form by the manufacturers, Neilson & Co of Glasgow. But when the divers found a 5 ft driving wheel, we knew that couldn't be right."

Eventually the engines were identified as 4-4-0 broad gauge tenders, specially built for a Canadian railroad. Since the engines had just left the factory, historians were able to discover much about their original manufacture, as (unlike similar engines remaining in use) they were not modified in any way. In the case of Franklin's engines, the differences in their configuration and type, according to Dr. Bailey, are significant enough that if one is found, and its working parts are at all visible to the remote cameras, it should be possible to say which engine -- and thus which ship -- met its fate at that place.
Posted by Russell Potter at 1:15 PM No comments:

Where to search for Franklin's ships? 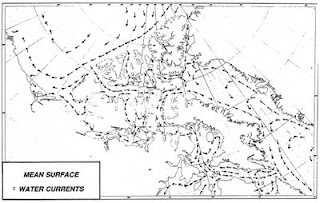 With the news that the private search for Franklin's ships will be the only one this summer, the practical question of where to look for Franklin's ships is re-opened. Robert Grenier had planned to search in the vicinity of the Royal Geographical Society Islands, but apparently Rob Rondeau and his team plan to look much further north, in the vicinity of Larsen sound, scanning an area south of where the ships were reported abandoned in the "Victory Point" record of 1848. But what are the odds that something will be found there? The map above, which I obtained some years ago from Ice Services Canada, shows the mean surface water currents throughout the Canadian Arctic. If you look at the area in question, you'll see two currents -- one hugging the shores of King William Island and tending to the north and northeast, and another, heading south and southwest along the coast of Victoria Island. The ice, of course, is subject to other forces than current, and generally flows south/southwest through the channel, though younger ice along the coast of KWI can often follow the contrary current northward.

If we assume that one of Franklin's ships was crushed not far from the original abandonment, the debris from this wreck could then go in either direction. Material embedded in the ice would have tended south, while material caught in the current way well have scattered to the north. Only a heavy object -- such as the ship's modified railway engine -- would be likely to plummet to the bottom at the site of the sinking. Yet whether one ship was crushed at this point is debatable; there are clear accounts by Inuit eyewitnesses to the sinking of one ship, and as David Woodman points out, this must have happened later, and further south than the abandonment, as the Inuit almost never visited the northwest quadrant of King William Island -- a fact corroborated by the clear evidence that the large cache of materials near Victory Point was not disturbed by Inuit until after they heard about it from white men. The crushing of one ship, then, may well have occurred much further south, and indeed the RGS Islands are a likely site, as the ice floes here, compressed by the narrowing channels, are turned into a jumbled, upended mouthful of teeth that could easily masticate any matter sent through them.

We do, as it happens, have some material evidence of where debris might end up -- when Dr. John Rae was on Victoria Island, he discovered several large pieces of wood, parts of which were painted a distinctive yellow color used by the Royal Navy, which he only belatedly realized must have come from the "Erebus" or "Terror." Such a find, if it came from a crushed ship, strongly suggests that the vessel was nearer the Victoria than the King William shore, as otherwise the surface ice would not have brought it within Rae's sight.

One last tale -- and a more terrifying one it is than any of the ship's slow crushing -- is that one or both of Franklin's ships was trapped in an iceberg and carried out to sea. This idea, long championed by my good friend Joe O'Farrell, is based on accounts by passengers on ships far to the east, who saw, or seemed to see, an iceberg pass by in which were embedded two stranded ships. Such a tale might be easily dismissed, were it not for cases such as that of HMS "Resolute," which drifted, unpiloted, along the same general route as this iceberg would have had to take, ending up in the Davis Straits. If indeed this story holds any (frozen) water, then Franklin's ships would be far off in the North Atlantic somewhere -- perhaps even near where the Titanic kept its much later date with an iceberg.

There remain many Inuit tales of a ship, apparently deliberately anchored in relatively shallow water, with a boarding plank lowered and some sweepings or debris from the deck on the ice nearby. These stories are detailed and vivid, and were repeated with nearly all the same details to Schwatka in the 1870's and Rasmussen in the 1920's. It is this ship -- the "Ootjoolik" wreck -- which David Woodman has searched for so patiently, as it is far more likely to be at least partially intact. Outside of the channels of the scouring ice, it may well be in a state of preservation approaching that of the "Breadalbane" near Beechey Island, which vessel was found with its sails still hanging from upright masts.

Franklin Search Called off for 2009

According to the CBC, this summer's search for Sir John Franklin's ships has been officially called off. Apparently, despite the much-vaunted announcement of Harper's government last year that a three-year mission had been authorized, neither the Canadian Navy nor its Coast Guard could be persuaded to give priority to this project. To my mind, it's a sad and regrettable occasion when a government proves unable to persuade either its Navy or Coast Guard to effect its own stated plans and policies, and especially so here -- the news makes it sound as though the ministers in charge of these agencies have more to say about the matter than the Premier - and seems to suggest that affairs in Ottawa are "disjoint and out of frame" as one King of Denmark once said.

On the other hand, as Jonathan Karpoff has argued, there is something to be said that, treated overall, Government-funded expeditions have fared poorly compared with private ones. So many limbs of the octopus must be marshaled together for a Government expedition, and there is such complication in its internecine conflicts, that it acts too slowly, and corrects too late, much like the helmsman of the Titanic seeking to avert an iceberg. Whereas, the story goes, private expeditions can respond with alacrity to changed circumstances, and go where the going is good rather than being tethered to some three (or five) year plan.

Nevertheless, it's surely true that the more resources from any quarter that can be brought to the search, the better. The area to be searched is so large, and the resources needed even to reach it are so substantial, that both public and private searches are needed in order to maximize the odds of eventual success. This year, Rob Rondeau is hoping to get the support and permits needed to do dives of his own, while earlier searches of private persons, particularly those of David C. Woodman, have created a crucial framework upon which all such future work depends. No matter who (if anyone) claims the prize, their laurels will be in part due to the perseverance of those who searched before. I certainly wish all those who undertake such a venture, now or in future years, the best.
Posted by Russell Potter at 8:09 PM 12 comments: