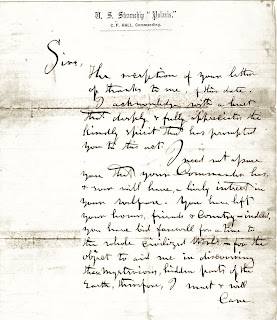 Sometimes it happens that the Internet, derided by some as a great time-waster, enables the sort of serendipity that would never otherwise be possible. Such is the case with Mary Greulich Moran and her great-grandfather, Johann Karl Kruger (known at the time as Robert Kruger), one of the seamen who served under Charles Francis Hall on the ill-fated "Polaris" expedition. In her comment on my earlier post about Hall's murder, she spoke of family stories of her great-grandfather's survival with the party stranded on the ice-floe, in the company of Hannah and Joe, under the command of George Tyson.

And, even more remarkably, her family still had the letter that Hall had addressed to the sailors. Some background: While the "Polaris" was still underway, some distance from her rendezvous with destiny, the regular sailors had complained, with some justice, about the poor fare they were served, while the officers and the German scientific staff enjoyed fine meals. Hall, who had apparently been unaware of this arrangement, immediately ordered that 'thenceforth, all differences between the officers' and enlisted men's messes would cease; they were brothers in a common cause and would eat the same food' (Loomis). The grateful men penned a letter of thanks:


"The men forward desire publicly to tender their thanks to Capt. C.F. Hall for his late kindness, not, however, that we were suffering want, but for the fact that it manifests a disposition to treat us as reasonable men, possessing intelligence to appreciate respect and yield it only when merited; and he need never fear but it will be our greatest pleasure to so live that he can implicitly rely on our service in any duty or emergency." 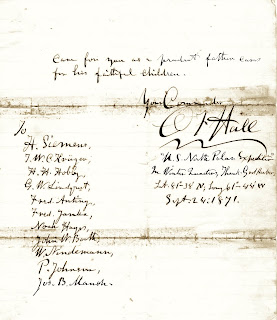 This letter deeply touched Hall -- so much so that he penned a reply, appending a list of all the crew and signing it with his traditional flourish. This letter must have been greatly valued by Kruger, and it has since been kept in good care by his family for three generations: "Sirs: The reception of your letter of thanks to me of this date I acknowledge with a heart that deeply and fully appreciates the kindly spirit that has prompted you to this act. I need not assure you that your commander has and ever will have a lively interest in your welfare. You have left your home, friends, and country—indeed, you have bid farewell for a time to the civilized world— for the object to aid me in discovering these mysterious hidden parts of the earth; therefore, I must and will care for you as a prudent father cares for his faithful children. "Your commander, “C. F. Hall."

It's not quite clear whether Hall made eleven copies of the letter (but then why list all their names and give only the general salutation "Sirs"?) or whether it was simply circulated among the men, and Kruger ended up with it, which would make its survival even more remarkable.

I am deeply indebted to Mary Greulich Moran for her forwarding a scan of the letter and her permission to publish it; on future blog posts I'll pass along more information about her great-grandfather and his role in the "Polaris" expedition.
Posted by Russell Potter at 4:45 AM 2 comments: