The humor of James Fitzjames 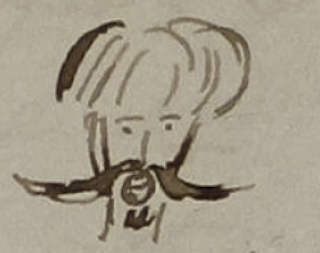 Among James Fitzjames's many gifts and proclivities, a weakness for what in Britain are called "puns," and in America "bad jokes" is among the most notable. And, in the world of such puns, the star of them all -- illustrated with a characteristic doodle (at left), goes thusly:

Q: "Why is Prince Albert’s kiss like this ship?"

Aside from the execrable homophony of the pun, it's curious that Fitzjames settled upon Prince Albert as its embodiment; in an age of famous whiskers, the Prince's were relatively moderate. Apparently, though, the jest hit home; in her copies of Fitzjames's correspondence with John Barrow Jr., Lady Franklin made her own copy of the cartoon!

His weakness for such puns is exemplified in many passages in his letters from HMS Erebus, mixed in with his jocular observations about others, as in this interchange with Osmer:

Osmar has just come from on deck (midnight) and is dancing with an imaginary skipping-rope. I said to him “What a happy chap you are Osmar you are always in a good humour.” His answer is, ‘Well, sir, if I am not happy here, I d’ont know where else I could be.”  – This will show you that we are really like a man shaving: So-appy!

Of course, some of the best instances of Fitzjames's jovial spirit are already well known -- his verbal portraits of his fellow officers in the "bundle of yarns" he sent to his sister-in-law, Elizabeth Coningham. These, though all meant in a light-hearted way (and meant only for private eyes), did occasionally veer into more pointed observations, using language that was omitted from the printed versions. Collins, the Second Master, he described as

... the very essence of good nature, and I may say good humour - but he is mad, I am sure - for he squints to himself with a painful expression of countenance when he is thinking - (or thinking of nothing) and I can get no work out of him, though ever so willing he may be - yet he is not a bore nor a nuisance - but a nonentity.

He added, though, that "we intend however to make something of him." Edward Couch got a similar mix of caricature and praise; Fitzjames calls him

a little bullet-headed - blackhaired - smooth-faced lump of inanity - good humored however in his own way - writes, reads, works, draws - all quietly - is never in the way of anybody - and always ready when wanted.

But doubtless the best among these portraits is his description of James Reid, complete with an imitation of his particular brogue:

The most original character of all— rough, intelligent, unpolished, with a broad North Country accent, but not vulgar - good humored & honest hearted is  Reid - a Greenland whaler - native of Aberdeen - who has commanded whaling vessels. & amuses us with his quaint remarks & descriptions of the ice - catching whales &c. - For instance - he just said to me, on my saying we should soon be off Cape Farewell at this rate, & asking if one might not generally expect a gale off it (Cape Farewell being the south Point of Greenland). “Ah! Now, Mister Gems, we’ll be having the weather fine Sir! Fine! - No ice at arl about it Sir, unless it be the bergs – arl the ice’ll be gone Sir only the bergs which I like to see. Let it come on to blow look out for a big’un. Get under his lee. and hold on to him fast Sir, fast. if he drifts – too near the land - why he grounds afore you do!” I think the idea of all the ice being gone except the icebergs, is rich beyond description.

Posted by Russell Potter at 2:59 PM No comments:

Our Friend and Pitcher

In the process of writing the notes for our volume of Franklin expedition letters, we learned a lot of seemingly random things: the name of a builder of cabinets for entomologists in St. Ives (John James Jarman), the fact that Franklin's friend Charles Beverly was then the head of the Bethlem Lunatic Asylum, and that a "treacle posset" might be good for you if you had a cold (recipe here). But among the more surprising discoveries began with the phrase "Our friend and Pitcher." Owen Stanley, a gifted draughtsman, was in command of HMS Blazer, one of two steam vessels (the other being HMS Rattler) that towed Erebus and Terror up the eastern coast of Britain to Stromness. Stanley made a number of sketches of the ships under tow, and gave one of them this title; in a letter, James Fitzjames mentions that "Stanley calls the Terror his friend and pitcher. This turned out not simply to be a pun (on account of the towed ships "pitching" about in the rough seas), but also a reference to a song, now lost in the mists of obscurity but then well-known enough that Fitzjames at once got the reference.
It was said to be George Washington's favorite play -- "The Poor Soldier" debuted in 1783, with music by William Shield and text by John O'Keefe. It was revived on numerous occasions, but by the 1840's one of its more popular songs had become a common feature of musical revues -- it was "My Friend and Pitcher":

My friend so rare, my girl so fair!

With such, what mortal can be richer?

Give me but these, a fig for care!

With my sweet girl, my friend and pitcher.

Of course, along with my fellow editors, I was enormously curious to hear this song -- but nary a recording of it seemed to exist. And then, to our great good fortune, we tracked down and got in touch with Dr. Sarah McCleave of Queen's University, Belfast. She had, we found, directed a student performance of "The Poor Soldier," and had recorded it on video. Making sure that she first obtained permission from the performers, she's generously agreed that we can share it here, so that everyone can hear the tune that was somewhere in the back of Stanley's and Fitzjames's mind -- so here it is!
With our deepest thanks to Dr. McCleave, and to the performers: Laoise  Ní Cearnaigh (voice), Amy Wright (piano), and Vanessa Ní Gaoithín (violin). The complete lyrics can be found here.
Posted by Russell Potter at 6:19 AM No comments: