A second photograph of Harry Goodsir 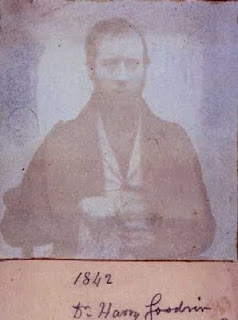 One of the more unusual categories for early sitters for the Daguerreian camera is monophotic, meaning persons for whom there exists only a single photograph. It's possible, as some have speculated, that Beard's apparatus, used to photograph the Franklin expedition's officers, was used to make two of every subject -- but so far, we only have a second image for two of them: Fitzjames and Des Voeux. We can now add a third sitter for whom this was not to be his only surviving photograph: Henry Duncan Spens ("Harry") Goodsir .

The photo has survived in the collections of the University of St. Andrews, and is labelled "1842 Dr. Harry Goodsir." It's a remarkable photograph, not only for the very different pose struck by Goodsir, but by this date. The Talbotype (later, calotype) process had only been invented two years earlier by Henry Fox Talbot; aside from those he made himself, only a handful of photographs made prior to 1843 by this process survive to the present day. That a portrait of Goodsir is among them is not, however, merely a matter of good fortune.

The Goodsirs were an illustrious scientific family; Goodsir's eldest brother, John Goodsir, was the foremost British anatomist of his era. In 1843, only a year after this image was taken, Harry Goodsir assumed the post of Consevator of the Museum of the Royal College of Surgeons in Edinburgh (a post earlier held by both his elder brothers). There had been considerable interest in the College, as well as at the University of Edinburgh, in the possible scientific applications of photography. The daguerreotype, in theory at least, was unavailable due to patent restrictions, but Talbot's calotype process was restricted only in England, not Scotland. And, as it happened, it was to be David Brewster, principal of St Leonard and St Salvator College at St. Andrew's University, who first brought the calotype to Scotland. Brewster was an expert in optics and spectroscopy, and among other things was the inventor of the kaleidoscope; he had corresponded extensively with Talbot, and may indeed have been the man to persuade him to permit free use of his invention in Scotland.

Under Brewster's influence, Robert Adamson, working with David Octavius Hill, opened the first portrait studio in Scotland in Edinburgh in May of 1843. As this Goodsir image precedes their establishment by at least several months, it's tempting to think that it may have been made directly under Brewster's tutelage, or even by him. There may, indeed, be still other photographs of Goodsir; I have heard rumors of a group portrait in which he is included, and with the spirit of experimentation then in the air, it would not be surprising if there were still others. Indeed, I think it very likely that Goodsir -- who was given a naval commission explicitly to serve as the Franklin expedition's naturalist -- was the officer in whose charge the Dageurreotype apparatus was placed. After all , in 1845, very few men, in or out of the Navy, could have claimed three or more years' experience with the newfangled science of "sun pictures."
Posted by Russell Potter at 1:45 PM 10 comments: