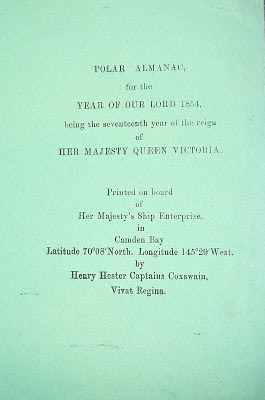 In the annals of Arctic newspapers, the Polar Almanac holds pride of place: it was actually printed using movable type and a press aboard H.M.S. Enterprise in Arctic Bay in 1853-4, making it -- at a slim 24 pages -- the most northerly printed book in the world. The technical challenges facing such a production, in a period when ink could, even aboard ship, freeze solid, and the cold metal parts of the press labored under the reduced efficacy of congealed lubricants, were daunting, and it is a remarkable credit to Henry Hester, the ship's coxswain, that he managed as much as he did.  Some pages were blank, or contained only a literal "almanac" of locations and temperature readings, but many had full-page text. The whole was printed on light green paper and bound in cream-colored wrappers; the print run seems to have been fairly small, as only a handful of copies have survived. Elaine Hoag, a rare book bibliographer at the National Library of Canada, and expert on Arctic shipboard printing, says only five. In her article, "Caxtons of the North," she also notes several unusual features of this newspaper: 1) That the coxswain, rather than the ship's clerk, served as printer (a necessity since the clerk, Edward Whitehead, had died earlier on the voyage); 2) The green paper of four of the surviving copies, originally intended for balloon messages, perhaps to aid in their visibility amidst the wilderness of white; 3) That it was printed with a very limited fond of type, which contained (for instance) no italic letters. It was not at all a newspaper in the sense of (even) some of the more elaborate manuscript papers, but it had the distinction of being entirely printed.

The page shown here is from what is believed to by Captain Collinson's personal copy, as it was passed down through his family, and is in remarkably good condition.
Posted by Russell Potter at 5:33 PM 3 comments: 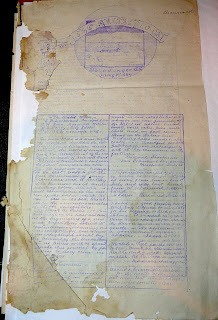 Among the more unusual papers printed by Arctic explorers is the Arctic Moon, published at Fort Conger by members of the Greely Expedition.  It was unusual not only for its content, but for its means of production; the Moon was printed using an apparatus known as the "hektograph"or gelatin duplicator, a relatively new invention at the time, and a distant cousin of the mimeograph machines common in the 1960's and '70's. Like the mimeograph, the hektograph used a dense ink containing a dark blue analine dye; one wrote with a special pencil upon coated paper; this paper was then lain down upon a bed of gelatin, which absorbed the ink. To "print" additional copies, one lay a sheet of clean paper on top of the bed of gelatin, and gently passed a roller over the surface.  The ink was then absorbed by the paper, which was then removed and allowed to dry. Lieutenant Lockwood and Sergeant Rice were the principal producers and editors of this newspaper; Lockwood drew the masthead, which depicted the main building at Fort Conger, while Rice oversaw the production; it was noted at the time that he was able to produce "enough for all, and many to spare."

This copy of the Arctic Moon was that belonging to Sergeant David L. Brainard, and is from the private collection of a friend. Alas, like nearly all surviving copies, it has suffered considerable indignities, becoming folded, torn, and water-stained on it way to becoming a dear-bought souvenir of a terrible ordeal.  There is said to be one nearly perfect copy in the archives of the Bostonian Society, but I have not been able to personally inspect it (although I certainly hope to do so someday).

The hektograph -- later hectograph -- process continued to be used well into the 1940's, when drum-based machines such as the mimeograph, as well as ink-extrusion ones such as the Gestetner, overtook it in popularity and ease of use.
Posted by Russell Potter at 2:13 PM 3 comments: