One of the most exciting things about editing the letters of the men of the Franklin expedition and their families is all the research one has to do on their backgrounds -- everyone who's mentioned in a letter should (ideally) be identified, and every topic explained, from steam-ship races to Chartist meetings, to Church politics in Tasmania. And every so often, one finds a diamond in the coal-chute of mere facts -- so it was with a reference in H.T.D. Le Vesconte's letters. He mentioned that he had gotten a letter from "William," apparently a doctor with a practice in Totnes, Devonshire -- and this William was trying to sell his home and practice. Once I identified him, the reason became clear.

William turned out to be Dr. William Wills, the brother of Les Vesconte's mother Sarah -- and the reason he wanted to sell was because he'd decided he wanted to emigrate to Australia! It seems, however, that his wife was initially unwilling to go, and so their sons headed out ahead of them; the stratagem worked, and the Willeses followed them a few months later. The family ended up in Ballarat in Victoria, where the father set up a new medical practice.

And it was there that his son William John Wills began a series of pursuits that would soon lead him to become, as had his cousin, an explorer. He'd had medical training with his father, and the younger William showed a gift for natural history reminiscent of Harry Goodsir's. He also became an avid outdoorsman, and learned the art of surveying; it was in this capacity that he was engaged by Robert O'Hara Burke, who had conceived of the almost-unheard-of idea of crossing the entire Australian continent on foot. The expedition departed in August of 1860, and endured almost unimaginable difficulties, primarily with a shortage of rations and the lack of other edible food sources. With the dismissal of the expedition's second-in-command, Wills became Burke's lieutenant. As they neared their final goal, though, Will's health declined steadily. Their only food at this point was the occasional fish and great heaps of nardoo -- a sort of Australian aquatic four-leaf clover. It was far from lucky for them -- instead, it became their "tripe de roche."

Finally, when it was clear he could go on no longer, Williams voluntarily stayed behind in their hut when Burke went to gather more nardoo. Fittingly, he wrote a final letter to his father before he died, and it's there that his thoughts turned to his cousin Henry:

These are probably the last lines you will ever get from me. We are on the point of starvation, not so much from absolute want of food, but from the want of nutriment in what we can get. Our position, although more provoking, is probably not near so disagreeable as that of poor Harry and his companions.

He died the next day, followed soon after by Burke himself. It was to be William's letters and journals, posthumously edited by his father, that became the best-known account of the journey. You can read them in full here. The expedition has many other similar aspects to Franklin's -- numerous searchers were sent, but mis-read the clues and narrowly missed rendering aid, and the exact cause of Wills and Burke's deaths is disputed even to this day, with some blaming the improper preparation of the nardoo, some blaming scurvy, and some pointing to beri-beri (caused by a deficiency of Vitamin B1) as the main culprit.

You're about to embark on one of the greatest adventures in the history of exploration -- the search for the Northwest Passage under the command of Sir John Franklin. Your room aboard ship, small as it is, is crammed with your books, clothing, and instruments; everything is in order. Your new shipmates are a goodly lot; you feel certain that, with them as your comrades, the long and isolated voyage will be the more bearable. And yet, a few weeks remain before you sail, and near at hand you have London, with all its attractions. What do you do?

Well, if your name is Harry Goodsir, you take yourself -- though money is tight -- and manage one of the cheap seats at Drury Lane. There, as you've read in the papers, the great singer Gilbert Duprez is to appear in the role of Arnold in Rossini's masterpiece Guillaume Tell. Duprez, famed in his time for being the first to sing a "high C" from his chest, was -- apparently in part from the exertion required for this feat -- perhaps a little past his prime, but nevertheless his singing, as the Illustrated London News declared, remained "transcendant." Their review went on to lament, "when will English singers, possessed as they are of fine voices, emulate the foreigners in passion, feeling, and true perception of character?"

It's a small detail, one I stumbled upon in one of Harry's missives that I'm currently working on for a forthcoming volume of all the letters of Franklin's officers and sailors, but a telling one. Goodsir only just had enough money to cover the cost of the required undress uniform; for the required silver table setting, he had to write home to his family. Having secured an appointment as Assistant-Surgeon and naturalist, he was eager to expand human knowledge, and make his name cataloging the sea-fauna, fish, and mollusks of the Arctic regions; he seemed -- both to himself and others -- at the beginning of a brilliant career. And yet, even at that moment, when resources were scarce, he did not neglect the Arts in the name of Science.

Such small but significant details abound in his letters, and those of all the others who would sail with Franklin; I can't wait to share them with the world. But time -- and editorial labors -- oblige us to wait; watch this space, as over the next months I hope to share a few more of the insights they contain. And, when the volume of them is ready for the press, you'll read about it first here.
Posted by Russell Potter at 10:32 AM 1 comment:

On the occasion of Harry Goodsir's two hundred and first birthday, it seems fitting to recall some of the other members of his illustrious family. His brother John was certainly the best known; an eminent anatomist and pioneer in cellular theory, he was for many years a Professor at the University of Edinburgh. Those who know Harry will almost certainly know Robert, who participated in two searches for the Franklin Expedition, and wrote a book about one of them; he later emigrated to Australia. The least well-known may be his sister, Jane Ross Goodsir, who kept Harry's memory alive, even saving some of his old laundry receipts!
But perhaps the most enigmatic and tragic figure among the Goodsirs was Joseph Taylor Goodsir (1815-1893). Unlike his more scientifically-minded siblings, Joseph found himself drawn to theology; after attending United College at St. Andrews, he studied divinity at the University of Edinburgh from 1833 to 1837. Although his grandfather John Goodsir (1746-1816), had long preached at the Baptist meeting house in Largo, Joseph aimed for a post in the established Church of Scotland. His father sought out the aid of Admiral Sir Philip Durham -- a man whose influence he would call upon again in 1845 to help Harry get his post with Franklin -- and through him secured an appointment for Joseph as the minster of Largo Kirk in 1843. Given the nature of the post -- it was more or less a lifetime sinecure -- Joseph's future would seem to have been assured. And yet, in 1850, he abruptly resigned his position, offering by way of explanation only his conviction that “the standards of the Church were not consistent with the teaching of the scripture."
Surely one factor may have been the emotional toll of the preceding years, years which saw the deaths of  John Goodsir (1782-1848) as well as the energetic Archie, youngest of the brothers. Harry's fate was yet unknown, though what news had reached home -- such as the discovery of the graves on Beechey Island (by a party that included Robert Goodsir) -- was not encouraging. But there also seems to have been a certain bent of mind among all the Goodsirs: a laser-sharp intellect paired with an almost-obsessive energy, so much so that nervous exhaustion was often the result. For Harry, this became a fascination with natural history, an enthusiasm which - by the account of his shipmates -- was both congenial and contagious. For John, it meant long hours in the laboratory and dissecting-rooms, combined with teaching duties. For Joseph, it seems to have meant an extensive study of scripture, and a series of theological tracts critical of the established church, which eventually led him out of the pulpit entirely. It seems significant that none of the Goodsir brothers ever married -- they all seem to have been too busy for such engagements.
Joseph ended up a man without a real profession; his sister Jane looked after him. Increasingly troubled by fits of melancholy, he was twice admitted to the Royal Edinburgh Asylum (in 1856 and 1858). His closest relationship in these years was with his brother John; the two travelled together to Berlin and later to Rome. John's death in 1867 was a heavy blow, but Joseph managed to fight off the shadows by throwing himself into organizing his brother's scientific papers for publication. For a time, it seemed as though this work had re-invigorated him; in 1868 he was elected a Fellow of the Royal Society of Edinburgh. 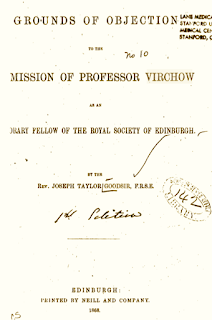 Yet it was not to be a lasting thing. As he had with theology, so now with science he threw himself into disputes. When, later that same year, the Royal Society proposed making Rudolph Virchow an honorary Fellow, he fixed upon some passages in Virchow's work that he felt insufficiently acknowledged John Goodsir's research. Indeed, though the passages were only roughly similar, he accused Virchow of plagiarism, and wrote an angry pamphlet as part of a one-man-campaign against Virchow. Needless to say, it did not endear him to his fellow Fellows, who elected Virchow anyway.
The remainder of his life was largely a story of a very gradual decline, punctuated with additional bouts of melancholia; though he purchased a small cottage, attended some lectures, and took up projects such as making scrap-books, none of these activities seemed to lift his spirits. Finally, on 29 April 1881, he was again admitted to the Asylum for melancholia and suicidal thoughts; he would never leave again. He died there on 27 April, 1893.
-------------
With my deepest thanks to Mike Tracy, whose research on his Goodsir relations provided the basis for this post.
Posted by Russell Potter at 6:06 AM 2 comments: