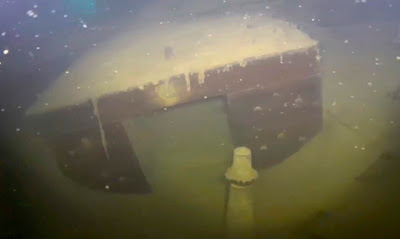 After what has seemed, to the waiters, an excruciating interval -- but in fact only about three years -- the underwater archaeology team at Parks Canada has opened the door -- or rather, the hatch -- into a world of wonders beyond anything any of us could have imagined. The newly-released video, mostly made using its brilliantly small ROV, takes us far inside the ship, both forward (we see bottles and mugs on a shelf in the forecastle) and aft (in one of the most stunning sequences, through the passageway along which the junior officers' cabins lie, and eventually all the way to Francis Crozier's "Great Cabin." There, aside from the thick layer of protective silt; things look much as they must have when the cabin was last in use; though a table seems overturned, Crozier's desk, with its enticing drawers, is upright and looks to be in perfect condition. Nearby, we see what must be his chair, and what looks to me like a parallel rule that would be used in plotting routes on a chart. The bank of cubbies and drawers which, as on Erebus, would have held those charts, looks similarly pristine, while on the port side another set of larger drawers seems a bit more damaged. On the starboard side, two shelves -- are those dusty books? -- while in the back, the eerie light of the surface world still peeps through the mostly intact windows.

On our way, we note the sliding doors that open into the officers' sleeping quarters (so wonderfully reproduced in AMC's The Terror), and peep inside one -- the bed-rail is still in place (is that someone's back-scratcher hanging from it?), and the chamber-pot tucked away on the floor, its user having gone more than a century and a half without the need of it. A couple of plates are seen behind a rail, with stacks more on another shelf; we seem to be looking into a storage area for the officers' mess. In other images, a wall of cubbies holds numerous intact bottles (apparently Crozier did not drink up all the whiskey!), some of which seem to have slips or papers underneath them, while on a nearby shelf a large, ridged bottle has become a home for anemones.

And we realize, of course, that this ultimate teaser-trailer is only a tiny selection from what are likely hundreds of hours of video, over which the Parks team will be poring for the next year, and longer. In much the way that Bob Ballard's earliest ROV video of RMS Titanic evoked a powerful sense of luster and loss, the camera becomes for us a kind of mournful visitor, urging us on even as, on another level, we feel a bit like intruders. Already, of course, Franklinites around the world are pondering, sifting, and will soon be having a grand back-and-forth over the finest of details in a single video frame. But for this first gilmpse -- so quickly shared with the public -- we must always be simply grateful.
Posted by Russell Potter at 5:57 AM 27 comments:

It's that time of year again. And although, unlike last year, there aren't any eggs frying on any sidewalks in my neighborhood -- in fact, it's been an unexpectedly mild August so far -- the lure of the Arctic is as inviting as ever. Each year, I understand more why so many people -- explorers, adventurers, scientists, and artists -- who've experienced the wondrous beauty of these regions yearn ever to return to them.

I'll be on a different route this time, working my way up the Greenland coast from Nuuk northward, then crossing over and heading north along the coast of Baffin Island, calling at Clyde River before I get to Pond Inlet, where I hope to meet up with old friends and see some familiar sights. Soon after, it's on to the Franklin expedition graves on Beechey, which due to heavy shore ice I was unable to reach last year. The ice charts, so far, look favorable, although the complex nexus of the Bellot Strait and the northern tip of King William Island is still in flux.

And of course I'll be eager to gather news of this year's search by the underwater archaeology team at Parks Canada, working with the cooperation of Inuit organizations and the Guardians program, as well as the dedicated support of the newly refurbished RV David Thompson; their work this summer on HMS Erebus and HMS Terror promises great things. And, as time away from my other duties allows, I hope to share what I find here, with the readers who have followed me on my previous journeys north. I have a feeling it's going to be another memorable year!
Posted by Russell Potter at 7:20 AM 3 comments: