The Faces of Franklin's Men?

Of all the many different kinds of forensic studies that have been done of the remains of Franklin's men, the one that had not been tried, until now, was facial reconstruction. With the recent excavation of the remains reburied by Schwatka at the site later tagged as NgLj-3, the opportunity to do so arose in two relatively well-preserved human crania. Now, with the assistance of forensic artist Diana Trepkov, the team of Anne Keenleyside, Doug Stenton, and Robert Park have tried this technique, in the hopes that the resulting models might match with known photographs, or (at least) give us a more vivid sense of the identities of these otherwise nameless men.

Their study has just appeared in the latest issue of The Polar Record, under the prosaic title of "Craniofacial Reconstructions of Two Members of Franklin's 1845 Expedition."

Facial reconstruction is part science, part art. The science part starts with the skull or a cast of the skull, which is then dotted with small markers which indicate the average depth of muscles and flesh at each point. From there, the reconstructor builds up "tissue" using modeling clay, then adds features -- glass eyes, sculpted hair, and (in this case) a shirt collar to give the face a life-like appearance. Of course the hairline is an educated guess, as is the hair color -- unless, as was the case with Richard III, DNA evidence lends a clue, which in his case led the reconstructor to replace a brown wig with a blond one, The nose is also partly conjectural, depending on the state of the fragile bone and cartilaginous material in this part of the skull. That there is some element of interpretation is undeniable, but certainly the technique is worth trying.

I've chosen just one of the reconstructions here -- it's certainly the more dramatic of the two. The model is based on "cranium #35," which is the better-preserved of the two. The most notable feature of this reconstruction is the enormous, bulbous nose of almost comical proportions. This is said to be based on "projecting nasal bones," although the preparatory sketch shows a more modest snout. The high cheekbones, heavy-set jaw, and slight underbite seem more realistically rendered. On the chance this this body, which may have been one of those in a boat abandoned near the site, was that of an officer, the authors compared this and the other face to the existing Daguerreotypes. They thought that it most resembled Graham Gore, while acknowledging that since Gore died prior to the 1848 abandonment, the skull can't be his.

But I think the authors missed another possibility. The recently-identified Talbotype of Lieutenant John Irving (which I've blogged about earlier) shows several points of resemblance -- the large prognathous jaw, high cheekbones, and clifflike brow (the model's eyebrows obscure this feature, but it's quite evident in the Irving photo). Of course, Irving's grave was supposedly found by Schwatka, and those bones rest in peace in Edinburgh's Dean Cemetery -- or do they? The next step, as the authors acknowledge, is to try DNA testing; since there are Irving descendants available, if any DNA can be recovered from cranium #35, we are likely to have a much more definitive answer.
Posted by Russell Potter at 7:55 AM 6 comments: 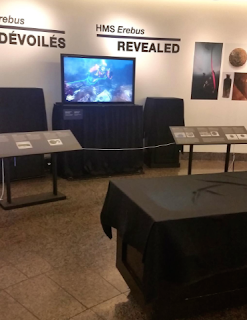 After waiting many weeks for news of the results of the ice-dive last month to HMS "Erebus," those of us with a longstanding interest in the Franklin expedition were, once again, caught be surprise, this time by a pop-up exhibition at the Canadian Museum of History. In a press release announcing this event, Parks Canada and the Canadian government gave a brief account of the dive, and mentioned specific artifacts which had been brought to the surface for conservation: one of the six-pounder bronze cannons, several of the rectangular deck prisms, the Preston patent illuminators, as well as personal items including a medicine bottle, china plates, and buttons identified as coming from a Royal Marine uniform. The report concluded by indicating that all of these items would be undergoing a period of conservation.

The philosophy behind this new exhibit seems to be to get everything on display as quickly as possible, which for some items means while they are still in the process of being conserved. And while there's nothing wrong with that -- in fact it's quite exciting! -- the haste with which the exhibit has been mounted has left many questions unanswered: From what part of the ships, or the debris, did these items come? The cannon, we are told, was found on the deck, but as to the others, it's hard to say from what has appeared so far. Why were the illuminators, which might be thought of as integral parts of the vessel, removed? The china plates (of which more anon), were these found in the vicinity of the sailors' mess, or did they turn up in the debris field? Some of the items mentioned do not yet seem to be part of the display; might there be others? How far into the wreck were the divers able to go? Will we be getting more imagery soon?

There are many goals that can be met with a museum exhibit. In terms of "revealing" some aspects of everyday life aboard ship, the plates are standouts -- one a an 1840's-era Whampoa Blue Ironstone plate with the "Island Pagoda" pattern, the other the quite common Staffordshire "willow" pattern still made today, suggest that those who ate from them may have come from somewhat different social classes.  One can also see one of the illuminators which brought daylight -- when there was any -- below decks, and a hook block with its distinctive shape. It's quite fascinating, but while it sheds some light on a few aspects of "Erebus," the exhibit doesn't appear to address the question of what the ship's condition or contents can tell us about the fate of Franklin's men. Was it piloted to the location, or did it drift there? How many of the ship's anchors are accounted for, and is there any sign of their deliberate deployment?

It may just be a bit too early to address these questions, or to bring more context into these seemingly disparate objects. Still, in their form and substance, they have a unique power to evoke the lives of the men who used them, as well as giving us a strong sense of how much more still lies below the icy waters of the Arctic.

UPDATE: Parks Canada's web exhibit of these artifacts is now online!
Posted by Russell Potter at 7:48 AM 6 comments: