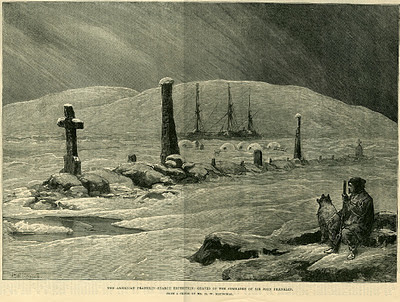 When the New York Times ran a blog post on its Dot Earth blog about the ballad "Lord Franklin," they chose as an illustration a curious engraving. It comes from a June 1881 issue of the Illustrated London News, and was one of many large plates showing scenes from Schwatka's search for Franklin. This one was captioned: "THE AMERICAN FRANKLIN SEARCH EXPEDITION: GRAVES OF THE COMRADES OF SIR JOHN FRANKLIN." So it would seem an ideal illustration for blog about the famous ballad lamenting the lost of Sir John and his "gallant crew," except for one detail: the graves shown here are certainly not those of Franklin or his crewmembers. The only graves, in the sense of organized burials with grave markers, are those found on Beechey Island; there were only three, until an unlucky crewman aboard the "North Star" joined them to make a party of four. And yet here we see what appear to be sixteen graves, three of which feature enormous columns that would seem to be made of wood or stone -- two obelisks and one cross.
So where is this graveyard -- with a village of igloos and an ice-bound ship near at hand? I think I have a likely answer, but rather than offer it here, I thought I'd "crowd source" the question: whose graves are these, and how did they end up being depicted in such a lovely but mistitled engraving?
(p.s. the version here is scanned from my own personal copy, not from the Times or the collection credited there).
Posted by Russell Potter at 2:39 PM 1 comment:

The first use of "Chimo" as a greeting is in Drage 1748, in Hudson Strait: "The Person in the Canoe... shewed a Piece of Whale-bone, repeating Chimo, and moving his Left-hand circularly upon his left Breast..." Andrew Graham in 1768 wrote that the Eskimos "rub their breast with their open hand, calling in a pitiful tone, 'Chimo! Chimo! which is a sign of peace and friendship. Hearne records "Tima" in 1795: "Tima in the Esquimaux language is a friendly word similar to 'what cheer.'" Edward Chappell in 1814 wrote that "Chymo" meant to barter.

These words each derive, in my opinion, from words that have their own discreet meaning, but in this context of being used as a greeting they have merged. George Back (1836-37) suggested as much when he referred to the men he met "vociferating their accustomed 'Tima' or 'Chimo'..." And McTavish in the 1880s wrote, "I bade the majority of the Esquimaux 'Timah,' generally written as 'Chimo'"

Chimo (which I think traditionally was pronounced Saimo - like Sigh-moe) comes from a root "saimak" which means blessing or peace. Saimaqsaiji means peacemaker. Saimati in northern Quebec and southern Baffin is "flag" - because after conversion Inuit stuck white flags into the snow beside their snowhouses to show that they were Christian and therefore peaceful. The phrase "saimugluk" (used between two people) today is always accompanied by a handshake, but derives from the same root, so it can be thought of as once meaning "Let's be friends," "Let's be in peace."

So the Taima and Chimo of the early white explorers and traders converged. The meaning was one of friendship and peace, with overtones of barter at the time.

None of this helps us understand "Mannik toomee."
Posted by Kenn Harper at 6:48 PM 5 comments: 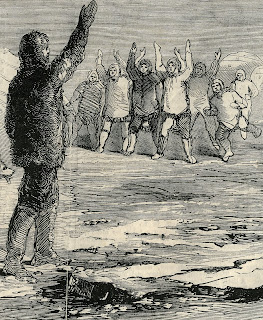 The image is almost a cliché of nineteenth-century Arctic explorers' narratives: the Kabloonas approach the "Esquimaux" carefully, and the natives, weapons in hand, crouch nervously, never perhaps having encountered white men before. And then, with a cry of "Teyma," "Mannik toomee," or "Kammik toomee"-- all words thought at one time or another to mean "Friend," "Peace," or "Welcome" -- the two parties instantly relax; handshakes are exchanged, and trade goods soon follow. Thank goodness the white people knew what to say!
But of course they didn't know what to say. Most British and American explorers did not know a single word of Inuktitut; if they had phrasebooks, these were often in the wrong dialect, and if they had interpreters these were often Greenlanders whose dialect was -- quite literally -- thousands of miles off. The Brits, and the Americans who followed them, also had a habit of taking any word or phrase spoken to them, interpreting it by context and gesture, and using it in return as a greeting.
Which brings us to "Mannik toomee," subject of part of my last posting. This phrase or something close to it is in the journals of many Arctic explorers, each of whom heard it a little differently; McClintock heard it as "Kammik toomee," Schwatka as "Munnuk toomee," and Hall as "Man-nig-too-me." Taken literally, it seems to be made up of either manik ("here") or kamik ("sealskin boot"), which is followed with tumiq ("tracks"?). In an agglutinative language such as Inuktitut, this could be construed as anything from "there are tracks here" to "here we stand" -- but my knowledge of the language is extremely limited, so I'd leave that to those who speak it, or linguists. The one thing I can say with some certainty is that it doesn't mean "Welcome," which is what the explorers thought it did.
It appears that this is one of those phrases, heard by white men at one point in time, and then re-used as a greeting. Since white men wrote down what they heard, later explorers might well re-use the term. "Teyma," assumed to mean "friend," was noted by Sir John Franklin in 1821, who remarked that it was "used by Esquimaux when they accost strangers in a friendly manner." Later explorers used it too, though at some point they seem to have switched to a variation of "Mannik toomee" -- so the question is, who first heard this expression, and made the assumption it was a friendly greeting?
Here things get sticky. I have a clear recollection that I'd read it was spoken by the angekoq or shaman who, in 1833, tried to keep the kabloonas led by George Back -- who, unbeknownst to Back, had earlier killed three Inuit -- from coming too close. But it's not in Back's, or in King's narrative. It does, however, feature in Inuit oral tradition. Dorothy Eber heard this phrase in a story about nervous Inuit approaching white men, and wrote about it in The Beaver and again in her most recent book. Her informant even offered a gloss on its meaning:

Eber believed the word was a specialized, "magic" or shamanistic word, used for its symbolic rather than literal meaning -- like, say, the English word "abracadabra" -- and that it may well have been the kind of word used only by a particular band, or even one specific shaman.
I believe this phrase may have been specific to the Utjulingmiut. This was the band Back met near the mouth of the river that would later bear his name, the band whose hunting area was nearest the site of the last Franklin ship, and the band which, due to famine and hostile neighbors, was dispersed to the winds, its survivors often finding refuge with other bands. Eber believes the testimony just quoted referred to Ross -- and indeed a similar scene happened at his first meeting with the Inuit. But where then is any reference to the man with one leg, sent ahead as the most expendable member (and later given a welcome wooden replacement by the ship's carpenter of the Victory)? No, I think this account is a worn-down version of the Inuit encounter with Schwatka's searchers in 1878; here is his version:
They formed a line with bows, arrows, and spears or knives, and, as we moved up to within a few feet, they began a general stroking of their breasts, calling "Munnik toomee" (Welcome).
The association of this gesture with the phrase is noted elsewhere -- but what is significant here is that this band, although from another area, had as its head-man one of the last survivors of the Utjulingmiut diaspora.
Incidentally, this also gives us another reason to suppose that "Too-loo-ark" may have been Franklin -- it was Franklin who picked up on "teyma," and according to Kok-lee-arng-nun, it was "Too-loo-ark" who added that phrase to his greeting:

Too-loo-ark would say "Ma-my-too-mig-tey-ma." Ag-loo-ka's hand shaking was short and jerky, and he would only say "Man-nig-too-me." After the first summer and first winter, they saw no more of Too-loo-ark.