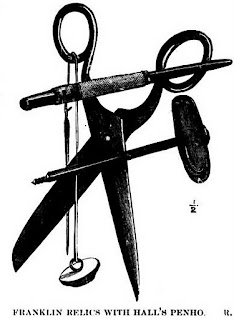 One of the most remarkable pieces of Inuit testimony was that given the Charles Francis Hall by a native in Pelly Bay whose name Hall transcribed as "Kok-lee-arng-nun." This old man, nearly blind, had two spoons of Crozier's, and happily volunteered his tales of visiting white men on ships. There was one boat which had been near where they were speaking (this must have been Ross's Victory) and two boats out near "Oot-joo-lik." His tale of visits to these two boats, at first, seemed very clearly to describe Franklin and Crozier, under the names "Too-loo-ah" and "A-gloo-ka."

He described "Too-loo-ah" as "an old man with broad shoulders, thick and heavier set than Hall, with gray hair, full face, and bald head. He was always wearing something over his eyes (spectacles, as Too-koo-li-too interpreted it), was quite lame, and appeared sick when they last saw him. He was very kind to Innuits -- always wanting them to eat something." With this man was his second officer, "Aglooka" -- Kok-lee-arng-nun showed how Too-loo-ark and Ag-loo-ka used to meet him. They would take hold of his hand, giving it a few warm and friendly shakes, and Too-loo-ark would say "Ma-my-too-mig-tey-ma." Ag-loo-ka's hand shaking was short and jerky, and he would only say "Man-nig-too-me." After the first summer and first winter, they saw no more of Too-loo-ark."

There are difficulties with this tale -- much of it seems to match up with Franklin's ships, but other parts of his stories seemed to relate more to Ross's expedition aboard the Victory. Hall himself, after his initial enthusiasm, decided that everything the old man had told him was nothing but memories of Ross. But this, of course, can't be true, for all kinds of reasons (Ross had one boat, not two, he had a full head of hair and was not short and squat, he did not die during the expedition, and many other details, as Dave Woodman has noted in his books). Yet assuming it to be Franklin's vessels leads to problems as well -- most notably that, since as Woodman notes, the Netsilik Inuit had no idea that Franklin's ships or men had been in the northwest of King William Island until they learned of this from McClintock in 1859, it seems impossible that such visits as Kok-lee-arng-nun described took place prior to the 1848 landing. This would date them to some following season, long after the death of Franklin. So who was the bald, lame man with spectacles?

I believe it was, after all, Sir John Franklin himself. First, let us remember the circumstances under which Hall met Kok-lee-arng-nun -- they were nearing an area where they had been warned about hostile Inuit, possibly Netsilik, and known locally as the See-ne-mun-ites. Hall at first worried that Kok's band was one of them. In fact, not long after the meeting Hall would be forced to turn back, mainly due to the fact that Ebierbing, his trusty guide, was too worried about hostile Inuit to go further. There were stories of some Inuit, originally from the area of Utjulik, who had returned home only to be murdered in cold blood. Clearly, the Utjulingmiut had been displaced by these hostilities, as they turned up in all kinds of places far from their home hunting ground; some were among Rae's informants who had passed Franklin relics to him in Repulse Bay in 1854, and I think that Kok-lee-arng-nun, though himself an Arvlingmiut from Pelly Bay -- must have been on good terms with the Inuit of Utjulik, since he had visited there. Both bands likely suffered from the hostile Netsilik, their near neighbors. That at least one of Franklin's ships ended up in this area we are fairly certain -- and yet, up until this meeting, McClintock and other searchers had met only with Netsilik. It seems likely to me that the astonishing wealth left in and near an abandoned ship might well have been the source of the violence between bands, and in the context of that violence, the reason why Kok-lee-arng-nun's group would not have shared their knowledge with any Netsilik. They knew of Franklin's ships, but would not have had the opportunity to return to the place of their meeting him, as it was now controlled by hostile Inuit.

The physical description of Franklin given by Kok-lee-arng-nun matches that of no other explorer known to be in the region. Franklin's expedition was the only one whose commander died, and whose replacement was a man already known to the Inuit. And there is a final reason why I am convinced that Kok-lee-arng-nun's tale relates to Franklin himself, and it is the greeting he described Too-loo-ah and A-gloo-ka using: "Man-nig-too-me." This is not, from what I understand, a very typical Inuit greeting, and in fact the belief that it was one can be traced very specifically to Back's expedition to rescue the Rosses. It was during this journey that, though Back did not learn about it until later, two Inuit were killed by his party. When he met later with other Inuit from the area near the mouth of the Fish River, he could not understand why they were so nervous, or why their head man kept repeating "manik toomee." Back recorded this in his published account, a copy of which would surely have been aboard Franklin's ships. John and James Clark Ross could not have learned of this phrase until long after their sojourn in the Arctic, and could never have used it; that the two men described by Kok-lee-arng-nun did is further evidence to me that they must have been Franklin and Crozier.

Woodman feels that this tale could apply to Crozier and Fitzjames -- but unless Crozier was bald under that cap of his, and put on considerable weight, injured his leg, and had started looking "old" -- I just can't see it. It seems more likely by far to me that Kok-lee-arng-nun's band, under threat by hostile Netsilik, would of course have had neither the opportunity nor the inclination to talk to them about their earlier visits with Franklin.
Posted by Russell Potter at 1:48 PM 2 comments:

New theory on the Boat Place 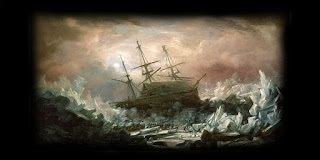 Ron Carlson has just posted a very thoughtful item on the possible reasons for the abandonment of the boat later discovered by M'Clintock to have been facing what he considered the "wrong" direction -- back toward the presumed location of the ships. I think it raises some good questions as to the ways in which we reconstruct both the physical evidence and our sense of the state of mind and morale of the men. I recommend that anyone interested in this question have a look at Ron's blog, and post their thoughts.
Posted by Russell Potter at 5:56 AM No comments: