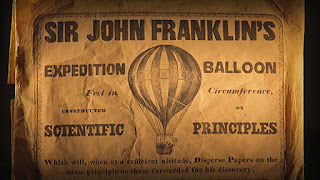 Inspired by a recent post on Andrés Paredes Salvador's blog on the strange tale of a balloon found in an English Garden, I've been doing a bit more research on the question of these balloons, their use, and the effect they had on the imagination of ordinary people back home in Britain.

Hydrogen and hot-air balloons had been around since the eighteenth century, and had been employed for all manner of purposes: humans went up in them, mail was first delivered using them in 1789, and inventors sought, by attaching sails and wings, to control their direction and speed. But the idea of using an unmanned balloon to carry a message seems to have originated in the Franklin search era; the ships of Austin's squadron were equipped with specially-made ones manufactured by George Shepherd (see package above), along with printing presses and strips of silk for making the messages colorful and light. The design even included a fuse which, as it burned, would release a message periodically to drift down to the ice below.

Back home in England, though, news of these balloons clearly sparked the public's imagination. For instance, among the many non-credible but nevertheless amusing letters sent to Lady Jane Franklin, there was this curious missive from February of 1850:


My lady, I have took the liberty of thus a-Dressing you with a Line through whose hands I hope will forwar to you this remarkable dream which I have often found too true . . . I saw in my dream 2 air Bloons a great distance off rising just liek the moon -- I said in my dreams to myself There's Sir. J. Franklend ...

The Gloucester balloon, "found" in a garden in October of 1851, at least had concrete form: there was a balloon, that much could not be doubted. Still, it was an odd discovery: the balloon did not show signs of having travelled thousands of miles; the "gas" in it was said to have a "foul odor" (neither hydrogen nor coal-gas has an odor, though other chemicals are added to the latter to make its detection easier); the balloon itself seemed to be of Shepherd's design, which would suggest that if Franklin's men had sent it, they must have found and re-inflated one of those sent from Austin's ships. Or, if a hoax, it must have been one retained by Shepherd, or one of the four he presented to others: one to the president of the Civil Engineers' Society, one to the Royal Society, and two to Lady Franklin. Could her Ladyship have had an interest in the hoax? It certainly seems unlikely.

What is less well-known is that Sir John Franklin's expedition came very close to being supplied with similar balloons. According to his son, Robert Baden-Powell, Professor Baden Powell of Oxford had recommended that hydrogen balloons be taken by Franklin; there is apparently a letter in which the Professor expressed his regret that this plan was not adopted.

As to the message in the balloon found in the garden -- "Erebus, 112 W, Long, 71 deg. N. Lat. September, 3, 1851. Blocked in" -- it at least makes it clear that the whole thing was a hoax, since the co-ordinates are in the midst of Victoria Land at a site with no connection to the sea, and HMS "Erebus" could not possibly have been stranded there. However, as W. Gillies Ross points out in his definitive essay on this balloon in the Polar Record, the location -- though vague -- is within the area that Dr. Rae had suggested "Erebus" and "Terror" would most likely be found, and so conceivably was chosen by someone hoping to direct searchers to this area.
Posted by Russell Potter at 11:48 AM 5 comments: 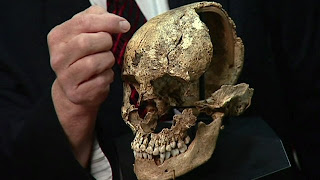 Those who have, over the years, expressed strong skepticism over the possibility of members of the Franklin expedition indulging in cannibalism take note: here is evidence, once more, of the fact that in the most desperate mad horrific of times, English people would east English people. It's a testimony to the ability of forensic science to re-construct and understand the acts of people who, on the edge of their own annihilation, reached for the "last resource" -- the bodies of their own dead. One should emphasize that, in both the case of Franklin's men and the Jamestown settlers, we have no indication that anyone actively sought to kill anyone else for the purpose of eating them. But, once dead, it's clear that human remains, and the promise of survival, however slender, that they offered, were irresistible to their comrades in the depths of despair and hunger.

Cut marks are again the key clue. In the skull of the teenage, upper-class 14-15-year-old dubbed "Jane" by those who studied the remains, the evidence is grisly. Clearly, whoever was seeking nutriment from this skull did not know how to go about doing so; there were three axe-blows on the side of the head, and three more severe ones at the back on the cranium, before the skull was actually split; this was followed by the use of a crowbar to break the shattered skull open. There are also a number of lighter cut-marks, probably produced by a knife rather than an axe, which indicate prior or further attempts to deflesh the skull; it is these cut-marks which are most similar to those seen on Franklin remains. Collectively, they tell of the attempts of a person unacquainted with butchery to butcher a fellow human being.

Brains of other animals were eaten by English folk of the Jamestown era -- indeed, their overall diet back home would have had its share of organ meats, intestines, and other animal parts far less commonly eaten by humans today. So their desperation had, in a sense, a goal perhaps less grotesque to the Jamestown settlers than to us today.

There are a number of resources and news stories online today about this finding -- the Smithsonian's site has the best, including an article in Smithsonian Magazine, as well as this video with the lead investigators, which also shows the reconstructed head of "Jane." From the content of her teeth, she seems to have enjoyed a higher-protein diet, which makes it more likely that she was one of the upper classes and not a servant.

No one likes to imagine cannibalism.  But no one should think that, in the worst of circumstances, people of any culture or nationality are immune to it.
Posted by Russell Potter at 4:45 PM 4 comments: