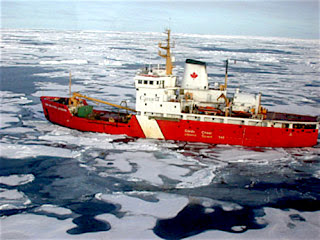 Here at Visions of the North, I've been following Parks Canada's search for Franklin's ships almost from the very beginning; while the blog wasn't yet online for the search led by Robert Grenier in 2008, I interviewed him the following November in Greenwich. I even covereed the absence of a search in 2009, and have posted about each year's search thereafter. 2014, of course, was the annus mirabilis -- the year that Franklin's flagship, HMS Erebus, was finally found -- and 2015 followed with the recovery of a fascinating array of artifacts from that vessel, many of which, although still in conservation, have already been displayed to the public. It's fair to say that, every year around this time, anticipation is keenly felt and hopes run high.

This year's search looks to be a modest one, with only a couple of days diving on "Erebus," and perhaps a week or a little more pursuing her sister ship "Terror." Divers plan a site survey of "Erebus" looking at the stability of the wreck and determining if there have been any significant changes; meanwhile, in the Victoria Strait area, it's hoped that a side-scan sonar search of the area following the drift path of ships or débris from the last recorded location of "Terror" might shine some light on its fate. While my own view is similar to that of Dave Woodman -- that the ship is more likely to be found within the horizon line from the Erebus Bay encampment -- one can't entirely rule out the possibility that the "Terror" met its fate further north; as I noted in my last post, the Inuit testimony about that vessel, substantial as it is, doesn't give us a clear, unambiguous location, unlike the wreck at Utjulik, which we now know to have been "Erebus."

The big news this year isn't so much the search itself as it is the development of a carefully-negotiated set of agreements and protocols, followed up by a number of meetings with Inuit communities. Parks Canada, to its credit, is going above and beyond the letter of the Nunavut Land Claims Agreement; while there's an argument to be made that maritime wrecks of foreign naval vessels aren't covered, they are following all the procedures that would be followed if they were. I think this is an important step, and from what I've heard, Inuit in the Kitikmeot region, as well as Nunavummiut generally, are pleased with these steps. In addition to community outreach, there's a clear signal that, from the 16.9 million allocated for the search over the next five years, there will be a significant commitment to what's described as a "multi-purpose infrastructure" including economic opportunities in Inuit communities. In another important development, a "Franklin Interim Advisory Committee" has been established, whose members include the Kitikmeot Inuit Association (co-chair), community representatives from Cambridge Bay and Gjoa Haven, Inuit Heritage Trust, the Government of Nunavut, Nunavut Tourism and Parks Canada.

And it's important that these developments be in place, not only to increase Inuit participation and make the search planning more transparent, but to avoid misunderstanding over the disposition of such relics are are recovered in the future. As I note in the conclusion of the final chapter of my book Finding Franklin,


"[The Franklin search] would more meaningful if it could also contribute something to the fragile northern economy, [and] to the generation of young Inuit across the territory. Our histories, after all, are tangled up together."

Posted by Russell Potter at 8:35 AM