The Fate of Dr. Kane's boat, the "Faith" 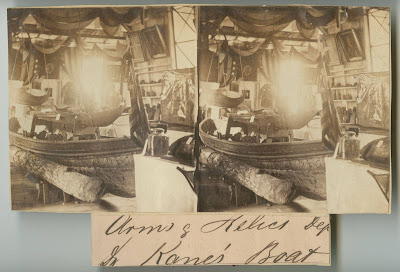 In my remarks to those gathered last week beside his tomb to commemorate the career of Dr. Elisha Kent Kane -- whose Arctic career once made him the most famous man in America -- and unveil a new historical marker at the site, I meditated on the fleeting nature of fame. From Kane's second and final northern voyage, as the commander of the Second Grinnell Expedition, I knew of several items that had been brought home, including the figurehead of Kane's ship, the "Advance" -- which, after a stint at the now-defunct Mercantile Library, is now safely enclosed in a glass case at the Kane Lodge in New York City -- and also of Kane's boat, the "Faith." As the lone survivor of the ship's whaleboats -- the others were burnt for fuel -- and the vessel which finally conveyed Kane and his men to safety, one would think that this vessel, like Shackleton's better-known "James Caird" -- would still be extant, and valued. It was, for a time, displayed at Deer Park in Philadelphia (where, exposed to the elements, it may have suffered new indignities), but survived long enough to be displayed at the Great Central or Sanitary Fair of 1864 (see above), as well as twelve years later at the Centennial Exhibition, after which all mention of it seems to have vanished. I often wondered whether it might still be stowed away in some nook or cranny, perhaps parked next to his old sled (which ended up at the Smithsonian)

Just recently, though, I came upon a watercolor in the collections of the Historical Society of Pennsylvania, by the artist David J. Kennedy. It showed the "Faith" almost as she would have looked when new, or if completely restored. An inscription by the artist on the back, alas, showed that this was the result of his skill with the brush, and not of any restorative efforts:


“The Faith at my suggestion was patched up and exhibited at the Centennial Exposition at the south part of the United States Government Building. An evening after the exposition had closed it fell in pieces, a wreck, rotted out."

One wishes that someone had, at the time, secured some small bit -- a fragment of a gunwale, or a plank -- and perhaps someone did, and it will turn up somewhere. But for the "Faith" herself, it seems to have been her destiny to hold herself together just until the Nation's centennial, and then fall to pieces all at once, like the wonderful one-hoss shay of legend.

Posted by Russell Potter at 9:48 AM