Where to look for HMS "Terror"? 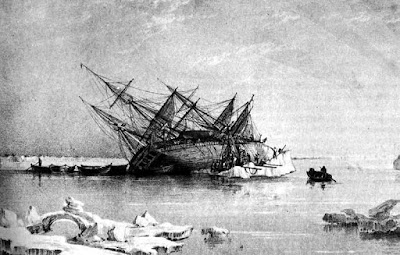 With the discovery by Parks Canada's marine archaeologists of HMS "Erebus" in 2014, the burning question has been the location of her sister ship, HMS "Terror." This year's search by Parks is planned to focus on the Terror, though there will be some new dives on Erebus as well. One might assume that, with one ship located and identified, it might be possible to narrow the range of sites to search for the second vessel, but that's not necessarily the case. In fact, since the Inuit never knew the name of either vessel, it takes some considerable review of the available testimony to sort out which tales refer to which ship; only then can we begin to form a clearer view of the possibilities. And, as was true of the 2014 find, it's mainly but not solely Inuit testimony that we need to consider.

One account that may deserve fresh attention is that given to L.T. Burwash by Enukshakak and Nowya in 1929, describing a cache of crates "northeast of Matty Island," along with wooden planks washed up on the shore, presumably from a wreck "three quarters of a mile off the coast of the island." Since we know that, if indeed this is a Franklin ship, it could only be the Terror, then this testimony offers one line of possibility. Similarly, any other sightings of ships at sites some distance from the known location of Erebus can, if accurate, only be of Terror -- these would include the ship possibly seen by Anderson's men in 1855 somewhere off Ogle Point.

These stories, though, are outliers to the main threads of Inuit tradition, which have the advantage that they begin with two ships, and include eyewitness accounts of one of them sinking. The most dramatic account of this was given to Hall by Kok-lee-arng-nun:


The old man and his wife agreed in saying that the ship on board of which they had often seen Too-loo-ark was overwhelmed with heavy ice in the spring of the year. While the ice was slowly crushing it, the men all worked for their lives in getting out provisions; but, before they could save much, the ice turned the vessel down on its side, crushing the masts and breaking a hole in her bottom and so overwhelming her that she sank at once, and had never been seen again. Several men at work in her could not get out in time, and were carried down with her and drowned.

Apparently, this ship's sinking was visible from on or near shore, and Inuit were present to witness it. Since the Victory Point record indicates both ships were intact when abandoned, and Inuit only learned of the Crozier's landing site (from McClintock's interpreter) in 1859, this event must have taken place after the ships were re-manned. There's good circumstantial evidence that this was the Terror; if we take the "Too-loo-ark" of this story to be Crozier then it would be the ship aboard which the Inuit often saw him, and the line in the "Peglar Papers" about the "Terror Camp" being clear suggests that the survivors from that vessel camped on the land. The likeliest site for this would seem to be Erebus bay, and as Dave Woodman has noted, the "visibility from shore" horizon line enables one to project an area of high probability (you can read his new, detailed account of this here or via my Franklin search archival pages).

At the same time, there are those who still believe that it's more likely that the Terror foundered before reaching that area. It seems significant to them that much of the recovered material from the Erebus Bay site is in fact associated with the Erebus, whereas if the Terror sank near there, more material from that ship might be expected. This was the original plan of the 2014 expedition, which took its name from the Victoria Strait, the goal of which was to locate the wreck or sunken debris from Terror. And now, in 2016, it seems that this is once more the primary search area that's been chosen, though of course it's also possible that ice conditions may limit or prevent a search there, as they did in 2014. It should be remembered that it was only after the disappointment of being unable to reach that year's goal that the Parks Canada team fell back on a further search in the Wilmot and Crampton Bay area -- and that it was that very search that finally revealed the golden sonar shadow of Franklin's flagship.
Posted by Russell Potter at 1:44 PM