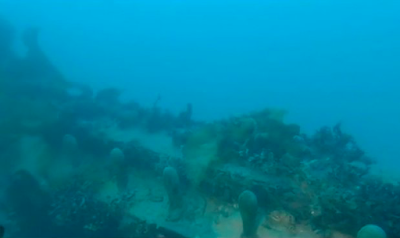 It's hard to overestimate the significance of this new and magnificent find: the second ship of Sir John Franklin's expedition, HMS "Terror," has been found. Initial images show her to be in far better condition than her sister ship, the "Erebus" (found by Parks Canada searchers in 2014), with her hatches battened, her bowsprit still in place, and many of the glass panes in her captain's cabin still intact. It's enough to warm the heart of any marine archaeologist -- or perhaps give them a heart attack! -- certainly a discovery that exceeds anyone's (mine included) wildest imaginings as to the vessel's state of preservation.

Initial accounts are short of precise details, and it's far too early to speculate as to exactly how this might revise our understanding of the final stages of the Franklin expedition. The ship-shape status of the vessel certainly indicates that she was left behind during a stage at which naval discipline and order were still intact. And yet, at the same time, we don't yet know the nature of the damage that brought her to the bottom. What we do see -- a vessel piloted to this location, and sunk within view of shore well to the south of the initial abandonment in 1848, vindicates the Inuit testimony as well as David C. Woodman's view that, based on said testimony, either or both ships must have been re-manned (I'd say both, at least for a time). Some press accounts speculate that after "Terror" was left here, the remaining sailors sailed further aboard "Erebus," but we don't yet have any clear timeline. The discovery of a "desk with open drawers," however, points the way to one possibility: some dated document -- almost any would do -- on board either vessel could sort things out in a jiffy. The far better state of preservation of "Terror" suggests that it would be the place to start.

The location is almost too ironic for words -- having the "Terror" found in Terror Bay seems, on the surface, even more bizarre than in the 2014 parody account on This Hour Has 22 Minutes, in which the fictitious "Inuit storyteller" Philip Ayarowaq, drily noted that “the elders tell of a ship of white men that was stuck in the ice off Queen Maud Gulf, or as we call it, ‘White Man’s Sinking Spot.’” How the ship could have escaped notice, so near to a shore where dozens of searchers passed for decades, is difficult to explain. Its presence there completes a weird symmetry, as on the opposite side of the Graham Gore Peninsula in Erebus Bay, the eponymous vessel was, at least for a time, anchored, though we now know it made it further south.

It's early days yet, though, and I think we should all work to avoid undue speculation -- a new discovery as significant as this one doesn't just add to the story, it casts unknown shadows in every direction. What we can say, with confidence, is that the Franklin mystery, far from being somehow solved, is once again made more complicated. Already there's talk of raising the "Terror" -- an idea which, though suggested by the seeming good state of the ship -- seems premature to me. All the Inuit I know on King William Island have hoped, over many years, for a find like this, not simply because it would vindicate their ancestors' stories or bring media attention -- but because it would bring economic growth, which is so sorely lacking in the North. Well before such a thing should be considered, we must ask, as with all such finds, what can we learn? And how can what we learn benefit those whose histories are as significantly linked to the "Terror" as they were to the "Erebus" -- the Inuit?
Posted by Russell Potter at 9:56 AM