The Mystery of the "Peglar" Papers 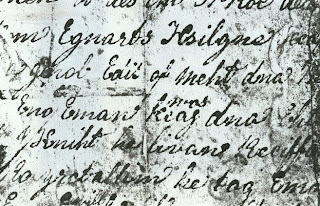 The sight was truly a melancholy one. In the words of Francis Leopold McClintock, “Shortly after midnight of the 25th May, when slowly walking along a gravel ridge which the winds kept partially bare of snow, I came upon a human skeleton, partly exposed, with here are there a few fragments of clothing appearing through the snow. The skeleton, now perfectly bleached, was lying upon its face; and it was a melancholy truth that the old Esquimaux woman spoke when she said, that they fell down and died as they walked along.” And yet this skeleton, remarkably enough, bore with it one of the most enigmatic documents in the whole Franklin mystery. In the words of Allen Young, who published his account in the Cornhill Magazine in 1860, “the Captain’s party found a human skeleton upon the beach as the man had fallen down and died, with his face to the ground; and a pocket-book, containing letters in German which have not yet been deciphered, was found close by."

Whose was this skeleton? And what were these letters? As it turns out, they were not written in German, although the mistake was understandable, given the frequent occurrence of words such as “Meht,” “Kniht,” and “Eht” – but on further examination, it was discovered that they were in fact in English, only written backwards. Why this would have been done is a difficult question – for my part, I can only suppose that there was some desire to conceal the contents of a sailor’s letters from his shipmates, whose rudimentary literacy would have made transposing the letters a daunting task.

The ownership of the letters posed yet another question; because among them was the seaman’s certificate of one Harry Peglar, they have been dubbed the “Peglar Papers” for years, and the name has stuck. McClintock’s description of the body, however, rules Peglar out; on its being turned over, the seaman’s uniform was found to be better preserved on the side that had faced the ground; his neckerchief was tied in the distinctive manner of a ship’s steward – something Peglar, a senior sailor with the title of “Captain of the Foretop,” would never have done. So the assumption now is that this must have been a friend of Peglar’s, carrying letters home for his since-deceased shipmate. An excellent candidate has been proposed in Thomas Armitage, who was the gun-room steward (servant of the junior officers) aboard HMS Terror, and had served alongside Peglar on several earlier voyages.

Backwards writing, it turns out, is only one problem facing anyone who tackles these papers – the paper is blotched and foxed, and has heavy folds, along which in many places pieces of the paper have broken off. At some point, an attempt to darken the ink with a re-agent damaged parts of the writing, perhaps irretrievably. Most frustratingly of all, where they can be made out, the papers consist mostly of a sailor’s reminiscences of warmer climes, particularly in Cunamar, Venezuela, a source no doubt of pleasure while trapped on board an ice-bound ship in the Arctic zone, but of no value in solving the Franklin mystery, and offering scant insight into the state of mind of Franklin’s men.

Nevertheless, scattered about in these letters are passages which are highly suggestive of events on board the ships. Like many writers with limited literacy, Peglar (or Armitage) added in asides about current events right in the midst of the old stories he was recounting. Thus we have phrases such as “brekfest to be short rations,” “whose is this coffee,” and “the Terror camp clear,” which – if only we could know more of their context – would seem enormously significant. Mixed in with these, alas, we have ample shares of doggerel verse, including a mildly obscene parody of the poet Barry Cornwall’s well-known ditty “The Sea,” accounts of tropical parties and turtle soup, and a paean to someone’s dog.

The most intriguing passage of all is one identified early on as possibly having some reference to life on the ships just prior to their abandonment: “We will have his new boots in the middel watch ... as we have got some very hard ground to heave a... shall want some grog to wet houer wissel ... all my art tom for I dont think for ..r now clozes should lay and furst mend 21st night a gread.” The “new boots” are assumed to be boots such as those found by McClintock and other searchers, which had been modified onboard by the addition of nails or cleats – these were clearly meant for the sledge-haulers. “Hard ground to heave” may be a reference to hauling sledges – or perhaps to digging graves (one thinks of the sailor buried by Parry near Igloolik, in the clearing of whose grave six pickaxes were broken on the frozen gravel). The “21st night a gread” is most tempting of all; might this be the 21st of April 1848, four days before the amended record was left near Victory Point?

Richard Cyriax, the founding father of Franklin studies, spent weeks on the papers, and prepared a typewritten transcript of what he could make out which still accompanies them at the Caird Library of the National Maritime Museum in Greenwich. I myself have spent several days going over the original papers, which have been covered in archival gauze to preserve the fragile material, but have rarely been able to improve on Cyriax’s readings; some of the text readable to him has since faded away. It may be possible someday, by use of ultraviolet light or computer-enhanced imagery, to recover something of what’s now illegible, but even then, the enigmatic quality of these papers remains. Their writer never imagined that they would be among the very few written materials ever recovered from the Expedition, and there are uncertainties in their contents that will probably never be resolved. Nevertheless, they add a further sense of wonder to the larger mystery of the final fate of Franklin’s men.
Posted by Russell Potter at 6:49 AM