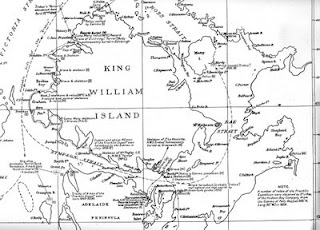 How exactly does one map a disaster? one may well ask. In the case of the lost Franklin expedition, where there is such a plethora of evidence, so widely scattered, and based on such differing and sometimes vague testimony, the task would seem almost impossible. That is, of course, unless one were Lt. Commander Rupert Thomas Gould, dubbed “the man who knew (almost) everything” by his biographer, Jonathan Betts. Gould, who came to the Hydrographer’s Department at the Admiralty during World War I while on medical leave due to a nervous breakdown, went on to become an acclaimed draughtsman, mapmaker, and the restorer of John Harrison’s famed chronometers, now on view at the Greenwich Observatory.

In 1926, Gould was given the job of preparing charts of the Canadian Arctic, and found himself naturally drawn to the mystery of Franklin’s lost men. He researched the subject voraciously – this was well before Richard Cyriax’s work had made much of the information readily available – and set to work on what became Admiralty Chart No. 5101 (detail above). The immediate impetus for its publication was a visit from none other than Major L.T. Burwash of Canada’s interior department, a character well-known for his keen interest in Franklin’s fate who would eventually lead three expeditions in search of further evidence.

The chart, published in 1927, shows the actual sites of all physical remains,including – for the first time – the ship whose masts were seen, but not reported by Anderson’s guides on his HBC expedition of 1855, a fact which had been uncovered by Burwash himself. It’s also notable that the map included Inuit testimony about ships given to Charles Francis Hall and others, although the map’s color key was designed to mark this evidence as of lesser authority. Finds by McClintock and other Royal Navy and HBC personnel were marked in red as authoritative; Inuit claims were underlined in blue.

Seen in the light of modern researches, this chart still holds up very well. The reported site of the ship searched for by David C. Woodman is plainly shown north of O’Reilly Island, and even the site to the east of King William Island near Matty Island, subject of some accounts in Dorothy Eber’s new book of Inuit testimony, is clearly marked. Of course, none of these ships has yet turned up in any of the places shown, although it’s entirely possible that either or both of them were eventually crushed to splinters by the ice. Even then, Gould has thoughtfully provided a dotted line showing the direction in which debris from such an event would likely have been carried.

It’s a beautiful chart, and was entirely drawn by hand by Gould himself in order to prepare it in time for Burwash’s use. This meant, of course, that the regular cartographers at the Hydrographic Office were bypassed; they indignantly insisted that the resulting chart be listed as “compiled by” rather than “drawn by” Gould (see Bett’s biography, p. 73). Gould continued his interest in the Arctic in later years, and is said to have given a number of lectures on the subject. One could hardly imagine how delightful and instructive they must have been.

For the detail of the map above, I am indebted to the McClintock family, who as ever have kept up their interest in the Franklin matter. They, and I, remain keenly hopeful that this map of disaster may someday be filled in with the actual locations of one or both of Franklin’s ships.
Posted by Russell Potter at 6:09 AM