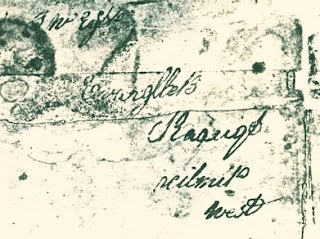 Following up on my last posting, I wanted to clarify the matter of addresses in the “Peglar” papers. That many of the sheets were meant to be entrusted to the post can be inferred by their folding, some remaining bits of red sealing wax, and the presence of addresses on the outside corner of several. None of the documents themselves seem to have any form of letter – there is no salutation, no signature, or any other such indication – the assumption is that these were stories, songs, or other works that the sender wished to have forwarded, perhaps accompanied by some sort of cover letter since lost. Nevertheless, that there are addresses offers at least a glimmer of hope that the intended correspondents might shed some light on the larger mystery. Here I'll draw from my own research, as well as from RJ Cyriax and AGE Jones's original study.

The most sensible, and – as it turns out – meaningful address is the notation “In care of Mr. Heaithfield, a Squier, no 10 Pelmell West, London”— Cyriax and Jones have identified this from a London Directory from 1845 as a Mr. William Eames Heathfield, a chemist whose shop was at 10 Pall Mall; he thus has the honor of being the only known correspondent of Peglar or Armitage. Another seemingly valid address is “Mr John Cowper, No. 47 John St., Commercial Road, London,” but here, alas, there is considerable ambiguity – according to Cyriax, there were no fewer than six “John Streets” in London’s East End, as well as two “Commercial Roads,” and in any case no “John Cowper” is listed as residing in any of them. Another address which met with no match in the Directory was written backwards: “IME . . . P Evarglleb Raauqs, Ocilmip, West.” Here it’s the name which is ambiguous; while "Bellgrave Squaar, Pimlico" is certainly valid, the other letters are far less clear. They might very well be someone’s initials; the “M” might be a “W,” and it might or might not be backwards. A name starting in “P” and ending in “EMI” is one possibility, as is a person with the initials “I.M.” or “I.W.” but apparently there was no match for either in the 1845 Directory; a detail of this address is shown above.

Last comes the most enigmatic, which Cyriax thought might be a “crude form of will”: “Mr Father all to Miss down fall no 6 Old free Street and a clear couarse.” The names are clearly fanciful, and so, apparently, is the address as there is no “Old Free Street” known in London or elsewhere at the time. One further name is discernable in the text but not given an address, and this is “John Faithfull.” At first, it might seem as fanciful as “Miss down fall,” but a search that I made of UK directories and newspapers revealed a number of men with this name, including a well-known physician in Edinburgh.

Cyriax and A G E Jones’s paper appeared in the Mariner’s Mirror in 1954, and since then I know of no further attempts to trace any of these correspondents. Certainly resources available online today – searchable newspapers, census records, and Googled books – offer the hope that more could be learned. Mr. Heathfield, at least, should be identifiable, and Mr. Cowper perhaps retrieved from obscurity, at least. I’d welcome any detective work that anyone online would like to do to further solve this enigmatic puzzler!
Posted by Russell Potter at 7:29 AM