Who “discovered” the Northwest Passage? 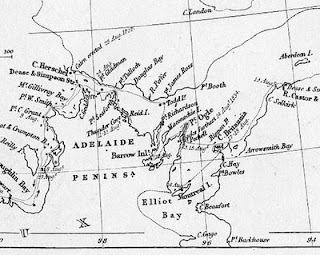 The latest row over the Northwest Passage has stirred up a considerable bit of dust in the UK, and may be spilling over into the rest of the world as well. The latest news soberly informs us that Alistair Carmichael, MP for Orkney and Shetland, is demanding not only that Dr. John Rae be recognized at the true discoverer of the Passage, but that Sir John Franklin’s claim on public memorials in Waterloo Place and Westminster Abbey be “corrected,” whatever that may mean. But before the Dean of Westminster sends a man ‘round with a chisel, it seems time to take a deep breath and ask very carefully: who, indeed, did discover the Northwest Passage?

The question is less simple than it sounds. What counts as “discovery”? Is it enough to have located the route of a passage, or must one sail through it? What if the discovery, or the route, is partly accomplished on foot? What happens if we add the adjective “navigable” to the question?

There is one fact worth mentioning at the outset: There is more than one “Northwest Passage” – depending on the melting of the ice, the size of the vessel, and the ability to break through older, denser floes half a dozen could easily be traced, depending on a variety of choices as to which route one takes.

Throughout the nineteenth century, the “discovery” of such a passage was always understood as proving its existence. Attempts and surveys had been made from the east and from the west; to locate a water route between them was universally understood as the goal. Ships coming from the east had managed to penetrate as far west as Parry’s Winter Harbour on Melville Island, but the route beyond that point was clogged with heavy pack ice, an unlikely to be navigable in any year. From the west, ships had enjoyed considerably less success, and indeed most of the discoveries in this direction had been accomplished by land, or by small parties using canoes. Sir John Franklin had completed the larger portion of these, stretching from Prudhoe Bay in the west to “Point Turnagain.” In the late 1830’s, Dease and Simpson, surveyors for the Hudson’s Bay Company, had extended Franklin’s map to its furthest westward point, a river they named the “Castor and Pollux,” after the sons of Zeus. Their survey was included in the very latest Admiralty charts supplied by Arrowsmith to Franklin’s 1845 expedition – a detail of the westernmost survey is shown above.

There was, however, a significant problem with Dease and Simpson’s survey, although no one realized it at the time. They incorporated their findings with James Clark Ross’s maps, which showed “King William Land” as contiguous with the Boothia Peninsula (Ross had in fact crossed over an ice-covered strait, of which more anon). They then, being unable to sight land to the westward, extended a dotted line connecting the waterway they saw with the “G[ulf] of Boothia (supposed).” Franklin would naturally have assumed two things from this: 1) To sail east of King William Land would lead him into a dead-end bay, shown as “Poctes Bay” on his maps; and 2) if his men needed to reach the Gulf of Boothia, they could have done so by boat if the waters were free of ice.

Franklin therefore steered to the west of King William Land, encountering a dense floe of heavy, multi-year ice, ice which entombed his ships within in its slow-grinding maw. He was in a “passage,” certainly, but one which would only by safely traversable in years of extraordinarily light ice, or else by modern, fortified icebreakers not yet available to him. He is often blamed for this, since we now know that there was indeed another passage to the east of King William, which was in fact an Island. This was established by Dr. John Rae in his survey of 1854, the one for which Canadian author Ken McGoogan feels that Rae, not Franklin, should be given the laurels of the Passage for surveying. And indeed it was by this route that Roald Amundsen, early in the twentieth century, sailed his little vessel the Gjøa.

It should be mentioned at this point, however, that had Franklin tried to sail to the east of King William, he would almost certainly have run both his vessels aground. The tiny Gjøa drew only about 1/3 as much water as Franklin’s heavy “bomb “vessels “Erebus” and “Terror,” and yet even Amundsen was obliged to throw large quantities of cargo overboard to lighten his vessel when he entered these waters, so close were the soundings to the draft of his ship. A “navigable” passage, yes – but not for ships of the sort which the British Admirality had been sending.

So back to our definition: had Franklin established a water route through the passage? Not yet, indeed, but during the lengthy period – two years at least – in which his ships were trapped, he and the commanders who succeeded him after his death certainly dispatched land parties. We have the original “Victory Point” record, as well as one other paper found further up the coast of King William, as evidence that such a party was dispatched. And, having Arrowsmith’s charts on board his vessels, Franklin surely knew that, at the southern extreme of the land off whose coast he was trapped, lay the “Cairn erected 25 Aug. 1839” by Dease and Simpson. It takes little conjecture to imagine that he would have made every effort, over a two-year period, to have a party reach this point and close one map with the other.

But we need not trust to conjecture – we can instead turn to Inuit evidence, and the evidence of the bones of Franklin’s men themselves. There are multiple stories reported by Inuit hunters, told not only to Charles Francis Hall but to Schwatka and even to Rasmussen in the 1920’s, of an encounter with survivors of Franklin’s expedition at Washington Bay. Cape John Herschel, the site of Dease and Simpson’s cairn, stands at the eastern edge of this bay; even if no party sent earlier had made it this far, clearly these survivors, who were hauling their sledge over the coastal ice, would have passed this point. For evidence of this, we need not rely solely on the Inuit; Francis Leopold McClintock found a skeleton at Gladman Point, westward of this site, and he and other explorers noted that the remains of Franklin’s men were scattered over the remaining coast, with the last few on the Todd Islets. And these bones are still there; they were shown to the crew of the St. Roch II by Louie Kamookak, whose grandfather, an RCMP officer, had found them there in the 1930’s.

So it is clear, that in the sense of “discovering” – that is, establishing a water-route connection between eastern and western surveys, that Franklin’s men must have done so. It is on this basis that the inscription on Franklin’s statue in Waterloo Place says that they “forged the last link with their lives.”

But it is objected; this route was not navigated; indeed it was not even navigable. This is true enough, but no one claims Franklin’s men navigated a passage, only that they found one. Nunavut politician Tagak Curley may proclaim loudly that “dead men can’t discover anything” – and yet by the Inuit testimony alone, it is clear that some living men did indeed pass this very point. Franklin himself, we now know, was dead (though he might have been alive if indeed an earlier party reached this point in 1847), but in any case, men from the expedition he commanded surely did do so. Ken McGoogan has argued that in order to truly "discover" something one must return with news of this discovery -- but I disagree. To discover is to find, to know, and to recognize.  Would Rae's discovery of the strait that now bears his name be invalid if he were to have met with an accident on his way home before he told anyone about it?

There is a belief among the Rae faithful that he has been slighted, and this all evolves from the fact that, in 1854, he clearly established that King William was an island. His own name, in the form of the “Rae Strait,” marks the southern end of this passage. Does this make him the “discoverer” of the passage? Well, he certainly discovered “a” passage, and one which, as Amundsen proved, was indeed navigable by a small vessel. But this does not subtract from Franklin’s achievement. Scottish national feeling aside – and one could as easily blame one Scot (James Clark Ross) for mis-naming a strait as “Poctes Bay” as credit another with showing this to be mistaken – there is no reason to argue that we should honor Rae instead of Franklin. Instead, I believe, we should honor him as well as Franklin. Neither man, while living, would have wished it any other way.
Posted by Russell Potter at 8:04 PM