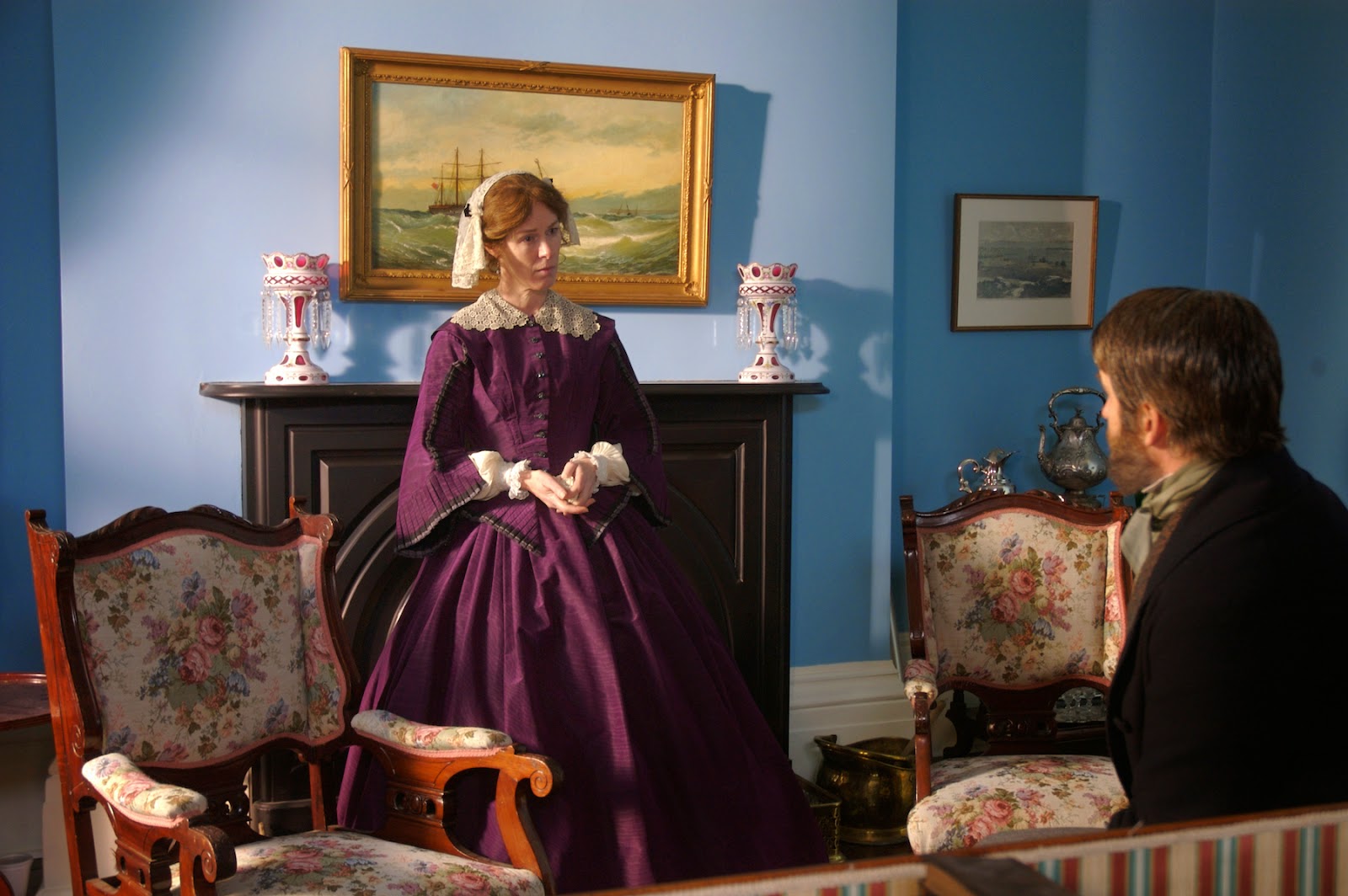 John Walker’s new documentary PASSAGE is among the most unusual documentaries I’ve seen on any subject. Unlike the vast majority of documentary films that followed in the wake of Nanook of the North, PASSAGE doesn’t fictionalize its facts, nor does it entirely factualize its fictions. The opening sequence, which you can see online here, is the tip-off: Rick Roberts, who plays the Scottish surveyor Dr. John Rae, is seen walking in present-day garb through present-day London, passing such iconic sights as St. Paul’s, the Millenium Bridge and Trafalgar Square. As he enters the Admiralty building in Whitehall and ascends the stairs, there is a certain dramatic tension – what next? The answer comes as he knocks and enters; as he steps into the room, we see the Lords of the Admiralty in full period uniform, then realize that Dr. Rae, too, has traded in his nylon backpack and windbreaker for a frock coat and an oversize bow tie. We know where we are, but when are we?

Walker delights in these sorts of anachronistic transitions in which, again and again, we are invited to pay attention to the proverbial ‘man behind the curtain.’ We see “Dr. Rae” speaking with such luminaries as James Clark Ross and John Richardson; the next moment we see them out of costume, seated around a table in a modern room discussing story ideas for the film. One moment, we are presented with a brilliant turn by Geraldine Alexander as Lady Franklin; the next we see her out of costume, looking like Annie Lennox on a bad hair day. In and out of these transitions, we meet with a few figures who remain in the present and – at first – outside the main action of the film: the director himself, author Ken McGoogan on whose book the film was based, and perennial Nunavut political figure Tagak Curley.

The re-staged scenes from the past – Captain Coppin revealing his daughters’ visions to Lady Franklin, Charles Dickens proposing his article in Household Words to Lady Franklin and a skeptical Dr. Richardson, Dr. Rae trudging across the tundra – work wonderfully, but are punctuated with lengthy sequences set in the present, beginning with a visit by Rick Roberts to the Orkney home of Dr. Rae, practicing his Scots brogue and how to cock and raise a rifle with local experts. Gradually, we come to see the historical pieces as the interludes, and the present action as the play itself, a tangent which comes to a head when Tagak Curley arrives in London. Curley, a charismatic politician who’s better known around Nunavut for his evangelical campaign slogans (“Jesus is Lord over Nunavut!”), happily plays the native informant to Walker, who guides him to the foot of the Franklin statue at Waterloo place. “They forged the last link with their lives,” he reads – and Curley hurries to disagree. “That’s a lie. Dead men can’t discover anything.”

And thereon hangs a tale, though it is one the film never quite tells explicitly. The belief among Franklin’s admirers has been that men dispatched from his ship in 1847 almost certainly reached Simpson’s Cairn, erected near the strait of the same name by an eastward survey of the Hudson’s Bay Company. Doing so would have united eastern with western maps, in effect “discovering” the, or at least a, passage. There is no absolute evidence of this, but both the records left by land parties and Inuit testimony agree that some men of Franklin’s party, whether as explorers or bedraggled survivors, certainly reached the extreme southwestern edge of King William Island, and some crossed over to the mainland.

Dr. Rae’s claim, championed by McGoogan and loudly echoed recently by Billy Connolly, comes later – in 1854 – and has to do with the Rae Strait on the southeastern corner of King William. Since the western side was rendered impassable nearly every year by heavy pack ice, the shallower but clearer eastern side is seen as a truer “passage”; indeed it was the route taken by Roald Amundsen when he became the first to sail the passage from end to end. Rae, as the surveyor of this alternative “last link,” is heralded as the true discoverer of “the” passage. Rae’s superior skill in surveying, and in living off the land, is undeniable; that he was snubbed by the Admiralty and attacked by Dickens indisputable. Yet the snub came, not because of any geographical claim, but rather on account of the Inuit testimony, brought home by Rae, that the final few Franklin survivors had turned to the “last resource” – cannibalism – in their efforts to stay alive and escape their frozen prison.

Tagak Curley, though hailed by some as the “Father of Nunavut,” is certainly no expert on the Inuit testimony about the Franklin expedition, or he wouldn’t so readily dismiss Franklin’s claim. One need not admire the Royal Navy, or Franklin himself, to credit the evidence that his men did indeed reach a point at our near the furthest eastward survey. He’s on firmer ground with his criticism of those who attacked Rae for bringing home the evidence of cannibalism, particularly Dickens who believed the Inuit attacked the Franklin survivors, and spoke of their having a “domesticity of blood and blubber.” And here again, Walker does not disappoint; he brings two unlikely people into the discussion, which by now has moved into the Admiralty board room: Ernie Coleman, RN (ret.), and Dickens’s own great-grandson. Coleman happily launches into his defense of the idea of bloodthirsty Inuit, which gets the whole room, especially Curley, shouting. Then comes the heir of Dickens, a man who’s made some study of his ancestor’s claims, and is more than willing to admit that Charles Dickens acted out of prejudice and ignorance. When he apologizes to Curley and Curley accepts, the moment is both deeply moving and somewhat absurd – and yet it is a moment that could have happened in no other film.

The movie has earned strong reviews in Canada, and is now available in the U.S. from Bullfrog Films. It’s not a perfect film, but it is provocative, and no one who has any knowledge or feelings about either Franklin or Rae should miss seeing it.
Posted by Russell Potter at 9:38 AM