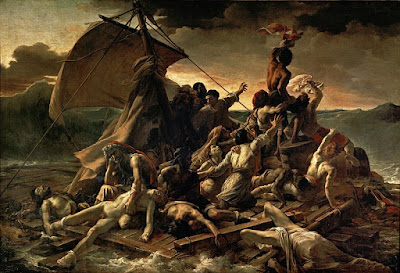 In next week's episode five of AMC's "The Terror," Captain Crozier, seeing Henry Collins approach with a party from "Erebus," quips "Ah, Mr. Collins! How fares the Raft of the Medusa?" Given the ships' already hellish names, the reference might slip by some -- or perhaps seem simply an allusion to the crowded conditions aboard ship -- but in 1847, a far darker meaning would have been obvious to anyone, as Théodore Géricault's infamous painting of that name had become a byword for cannibalism.

The painting was based on the wreck of the French frigate Méduse, which sank in July of 1816; what followed was one of the most harrowing shipwreck stories of all time. A raft, made of parts of timber from the ship, was crowded with nearly a hundred and fifty people; over the next two weeks, all would perish but fifteen of them. Dehyrdration (some drank sea-water and died even more painfully), starvation, and drowning took many, and in their final desperation, cannibalism was resorted to by the survivors. The painting itself stirred its own controversy; Géricault consigned it to a somewhat unscrupulous art-dealer, who took it on a one-painting tour of Europe that was condemned for making money off an image of disaster. At one of its appearances, in Dublin Ireland, it was upstaged by a moving panorama of the same subject, which had the added attraction of being personally narrated by one of the survivors!

It's a fairly well-known story today how Dr. John Rae, along with the almost-sacred relics of Franklin and his men, brought back Inuit testimony that some of them has resorted to what he called "the last resource." The Inuit told of boots containing cooked flesh, bones broken open for the marrow, and piles of skulls. On arrival in England, Rae's testimony proved explosive; he had intended it only for his private report to the Admiralty, but it ended up on the pages of The Times. He received the £10,000 reward for ascertaining the fate of Franklin, but was shunned by Lady Franklin and many other Arctic hands. His toughest opponent turned out to be Charles Dickens, who -- after the seeming-kindness of offering to print Rae's full report in his magazine Household Words -- launched into a two-part tirade, "The Lost Arctic Voyagers," in which he argued that no good Christian navy man would resort to such behavior, and that hostile Inuit were to blame. Thanks to the careful  forensic work of Anne Keenleyside, we now have clear evidence that Dickens was wrong, and that the Inuit testimony was, as it has again and again proven to be, truthful. 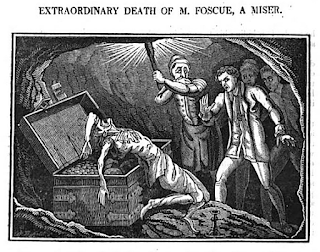 Dickens, as it happens, had been obsessed with the subject of cannibalism since he was a boy. Working in a boot blacking factory, he managed to set aside a penny a week for a subscription to a lurid magazine calling itself The Terrific Register. To his friend John Foster, Dickens quipped that for a mere penny, the magazine frighened the wits out of his head, "which, considering that there was an illustration to every number in which there was always a pool of blood, and at least one body, was cheap." Among these was the case of a miser, Mr. Foscue, who was so fond of his money that he had himself locked in his own bank vault; some time later, he was found dead, having endeavored to sustain himself by eating his own flesh, fork in hand. Some Dickens scholars feel this story planted the seeds of the character of Ebenezer Scrooge! 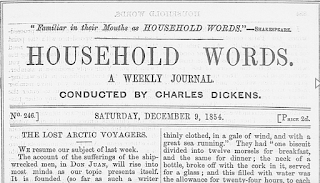 Dickens's obsession with the subject continued into adulthood; on hearing of Dr. Rae's report, he immediately wrote to his friend W.H. Wills (the managing editor of Household Words): "It has occurred to me that I am rather strong on voyages and cannibalism and might do an interesting little paper for next number on that part of Dr. Rae's report, taking the arguments against its probabilities. Can you get me a newspaper cutting containing his report?" He did, and Dickens was as good as his word. In his paper, he not only cast doubt on the Inuit testimony brought home by Rae, but embarked on a lengthy catalog of every single well-known instance of cannibalism at sea. The "Raft of the Medusa" was therefore part of his subject; as with the other instances, Dickens used it to advance his view that cannibalism was impossible among well-disciplined, Christian English men -- but of course, as to ill-disciplined Frenchmen:


No discipline worthy of the name had been observed aboard the Medusa from the minute of her weighing anchor. The captain had inexplicably delegated his authority "to a man who did not belong to the staff. He was an ex-officer of the marines, who had just left an English prison, where he had been for ten years." This man held the ship's course against the protest of the officers, who warned him what would come of it. The work of the ship had been so ill done, that even the common manoeuvres necessary to the saving of a boy who fell overboard, had been bungled, and the boy had been needlessly lost. Important signals had been received from one of the ships in company, and neither answered nor reported to the captain. The Medusa had been set afire through negligence. When she struck, desertion of duty, mean evasion, and fierce recrimination, wasted the precious moments. "It is probable that if one of the first officers set the example, order would have been restored; but every one was left to himself."

All this, of course, was brought home by Dickens's intense admiration for Franklin and his officers and crew. Franklin's presence alone, he reasoned, rendered such a thing impossible (he apparently forgot that cannibalism also occurred on Franklin's first land expedition -- and did not know that Franklin had died the year before the ships were abandoned, as this was only learned in 1859). Naval discipline, the good character and cheer of the men, and their essential Englishness formed the rest of the guarantee.