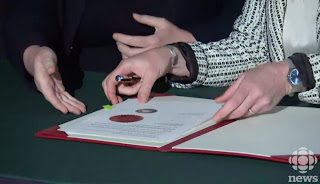 It's been a long time in the making -- roughly twenty years or so -- but the two ships that sailed as Sir John Franklin's last, lost expedition -- HMS Erebus and HMS Terror -- have now been officially given to the people of Canada by the government of the United Kingdom.

It all began in 1997. That was the year that Canada and the UK signed their first "memorandum of understanding," which stated their mutual agreement that Franklin's ships, if found, would be given to Canada, with the exception of three things: Gold (not bloody likely), the bodies of the dead (to be repatriated if practical), and objects deemed "to be of outstanding significance to the history of the Royal Navy." It was a hypothetical division of the spoils, to be sure -- neither ship had yet been found -- and it predates the era when the Harper government made finding these ships such a priority. The main force behind it, I would say, was the increasing realization -- particularly in light of the dramatic exhumations of the Franklin sailors' bodies at Beechey Island by Owen Beattie in 1984 and 1986, as well as the excavations at Erebus Bay undertaken by Anne Keenleyside and Margaret Bertulli -- that the Franklin story, among the many other things it was, was increasingly, distinctively, a Canadian story.

With the discovery of the ships themselves in 2014 and 2016, though, the plot thickened. The precise meaning of the MOU, and the definition of "outstanding significance" raised a host of issues that now appeared as obstacles. And so, although Britain's then-defense minister Sir Michael Fallon announced late in 2017 that the ships were indeed to be given to Canada, this was followed by a very long pause, as negotiators met over weeks, and then months, to hammer out the details of how this transfer would be made.

Enter Canada's new Environment minister, Catherine McKenna, along with Susan le Jeune d'Allegeershecque, the High Commissioner to Canada. At today's press conference, the implication seemed to be that they had, together, brokered an end to the logjam of back-and-forth negotations, and indeed it seems that they have, as they signed the formal "deed of gift" for the two vessels. Those who remembered the history of the earlier agreement were led, of course, to wonder when it was mentioned that the items of "special significance" had been deemed to be the 65 items already brought back from HMS Erebus by Parks Canada's underwater archaeologists, many of which are part of the current exhibition at the Canadian Museum of History, which hosted the signing news conference.

It's a peculiar solution to a peculiar problem. On the one hand, it seems a sad and sudden loss to surrender these 65 items, which were removed from the wreck of the Erebus and conserved in laboratories in Canada at considerable expense. On the other, it is certainly the case that the remaining artifacts -- which will likely include written materials -- will eventually number many times that figure. I was initially a bit upset at the idea, but it's grown on me as I've thought on those things which are yet to come.

The other major takeaway from the press conference is that the Inuit Heritage Trust have given their blessing to this settlement, and that their ongoing co-operation and co-ownership of artifacts with Parks Canada is secure. The IHT spokesman, Torsten Diesel, spoke of the invaluable contributions of the late Louie Kamookak (in whose memory a moment of silence was observed) along with Sammy Kogvik, and the older Inuit testimony that have all been vital to the finding of the ships. He and the Trust hope -- and it's a hope I share -- that this will add momentum to their efforts to raise funds for a proper Archives of Nunavut, which would be able to conserve and house future findings, along with all the vast collection of materials currently held in trust for the GN at various museums and archives.

The ultimate point of all this complex history, though, is a simple one. With legal issues such as ownership and management cleared up, and with the dedicated support of their new research vessel the David Thompson, Mark-André Bernier and his Parks Canada team will finally be able to proceed with their work free from the many complications these matters created when unresolved. I'm very happy for them, and looking forward enormously to the finds of this year, and many years to come.
Posted by Russell Potter at 4:30 PM